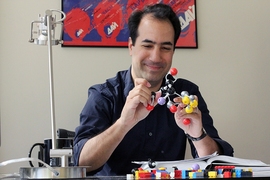 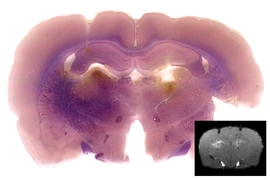 ↓ Download Image
Caption: MIT researchers used a novel MRI contrast agent to track the location of a reporter protein called SEAP, indicated by the bright spot on the left side (inset). The larger image shows the corresponding optical image of the same contrast agent.
Credits: Image courtesy of Gil Westmeyer and Alan Jasanoff

Caption:
MIT researchers used a novel MRI contrast agent to track the location of a reporter protein called SEAP, indicated by the bright spot on the left side (inset). The larger image shows the corresponding optical image of the same contrast agent.
Credits:
Image courtesy of Gil Westmeyer and Alan Jasanoff

Doctors commonly use magnetic resonance imaging (MRI) to diagnose tumors, damage from stroke, and many other medical conditions. Neuroscientists also rely on it as a research tool for identifying parts of the brain that carry out different cognitive functions.

Now, a team of biological engineers at MIT is trying to adapt MRI to a much smaller scale, allowing researchers to visualize gene activity inside the brains of living animals. Tracking these genes with MRI would enable scientists to learn more about how the genes control processes such as forming memories and learning new skills, says Alan Jasanoff, an MIT associate professor of biological engineering and leader of the research team.

“The dream of molecular imaging is to provide information about the biology of intact organisms, at the molecule level,” says Jasanoff, who is also an associate member of MIT’s McGovern Institute for Brain Research. “The goal is to not have to chop up the brain, but instead to actually see things that are happening inside.”

To help reach that goal, Jasanoff and colleagues have developed a new way to image a “reporter gene” — an artificial gene that turns on or off to signal events in the body, much like an indicator light on a car’s dashboard. In the new study, the reporter gene encodes an enzyme that interacts with a magnetic contrast agent injected into the brain, making the agent visible with MRI. This approach, described in a recent issue of the journal Chemical Biology, allows researchers to determine when and where that reporter gene is turned on.

MRI uses magnetic fields and radio waves that interact with protons in the body to produce detailed images of the body’s interior. In brain studies, neuroscientists commonly use functional MRI to measure blood flow, which reveals which parts of the brain are active during a particular task. When scanning other organs, doctors sometimes use magnetic “contrast agents” to boost the visibility of certain tissues.

The natural version of SEAP is found in the placenta, but not in other tissues. By injecting a virus carrying the SEAP gene into the brain cells of mice, the researchers were able to incorporate the gene into the cells’ own genome. Brain cells then started producing the SEAP protein, which is secreted from the cells and can be anchored to their outer surfaces. That’s important, Jasanoff says, because it means that the contrast agent doesn’t have to penetrate the cells to interact with the enzyme.

Researchers can then find out where SEAP is active by injecting the MRI contrast agent, which spreads throughout the brain but accumulates only near cells producing the SEAP protein.

In this study, which was designed to test this general approach, the detection system revealed only whether the SEAP gene had been successfully incorporated into brain cells. However, in future studies, the researchers intend to engineer the SEAP gene so it is only active when a particular gene of interest is turned on.

Jasanoff first plans to link the SEAP gene with so-called “early immediate genes,” which are necessary for brain plasticity — the weakening and strengthening of connections between neurons, which is essential to learning and memory.

“As people who are interested in brain function, the top questions we want to address are about how brain function changes patterns of gene expression in the brain,” Jasanoff says. “We also imagine a future where we might turn the reporter enzyme on and off when it binds to neurotransmitters, so we can detect changes in neurotransmitter levels as well.”

Assaf Gilad, an assistant professor of radiology at Johns Hopkins University, says the MIT team has taken a “very creative approach” to developing noninvasive, real-time imaging of gene activity. “These kinds of genetically engineered reporters have the potential to revolutionize our understanding of many biological processes,” says Gilad, who was not involved in the study.

The research was funded by the Raymond and Beverly Sackler Foundation, the National Institutes of Health, and an MIT-Germany Seed Fund grant. The paper’s lead author is former MIT postdoc Gil Westmeyer; other authors are former MIT technical assistant Yelena Emer and Jutta Lintelmann of the German Research Center for Environmental Health.