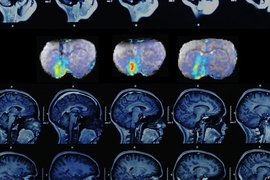 Launched in 2013, the national BRAIN Initiative aims to revolutionize our understanding of cognition by mapping the activity of every neuron in the human brain, revealing how brain circuits interact to create memories, learn new skills, and interpret the world around us.

Before that can happen, neuroscientists need new tools that will let them probe the brain more deeply and in greater detail, says Alan Jasanoff, an MIT associate professor of biological engineering. “There’s a general recognition that in order to understand the brain’s processes in comprehensive detail, we need ways to monitor neural function deep in the brain with spatial, temporal, and functional precision,” he says.

Jasanoff and colleagues have now taken a step toward that goal: They have established a technique that allows them to track neural communication in the brain over time, using magnetic resonance imaging (MRI) along with a specialized molecular sensor. This is the first time anyone has been able to map neural signals with high precision over large brain regions in living animals, offering a new window on brain function, says Jasanoff, who is also an associate member of MIT’s McGovern Institute for Brain Research.

His team used this molecular imaging approach, described in the May 1 online edition of Science, to study the neurotransmitter dopamine in a region called the ventral striatum, which is involved in motivation, reward, and reinforcement of behavior. In future studies, Jasanoff plans to combine dopamine imaging with functional MRI techniques that measure overall brain activity to gain a better understanding of how dopamine levels influence neural circuitry.

“We want to be able to relate dopamine signaling to other neural processes that are going on,” Jasanoff says. “We can look at different types of stimuli and try to understand what dopamine is doing in different brain regions and relate it to other measures of brain function.”

Dopamine is one of many neurotransmitters that help neurons to communicate with each other over short distances. Much of the brain’s dopamine is produced by a structure called the ventral tegmental area (VTA). This dopamine travels through the mesolimbic pathway to the ventral striatum, where it combines with sensory information from other parts of the brain to reinforce behavior and help the brain learn new tasks and motor functions. This circuit also plays a major role in addiction.

To track dopamine’s role in neural communication, the researchers used an MRI sensor they had previously designed, consisting of an iron-containing protein that acts as a weak magnet. When the sensor binds to dopamine, its magnetic interactions with the surrounding tissue weaken, which dims the tissue’s MRI signal. This allows the researchers to see where in the brain dopamine is being released. The researchers also developed an algorithm that lets them calculate the precise amount of dopamine present in each fraction of a cubic millimeter of the ventral striatum.

After delivering the MRI sensor to the ventral striatum of rats, Jasanoff’s team electrically stimulated the mesolimbic pathway and was able to detect exactly where in the ventral striatum dopamine was released. An area known as the nucleus accumbens core, known to be one of the main targets of dopamine from the VTA, showed the highest levels. The researchers also saw that some dopamine is released in neighboring regions such as the ventral pallidum, which regulates motivation and emotions, and parts of the thalamus, which relays sensory and motor signals in the brain.

Each dopamine stimulation lasted for 16 seconds and the researchers took an MRI image every eight seconds, allowing them to track how dopamine levels changed as the neurotransmitter was released from cells and then disappeared. “We could divide up the map into different regions of interest and determine dynamics separately for each of those regions,” Jasanoff says.

He and his colleagues plan to build on this work by expanding their studies to other parts of the brain, including the areas most affected by Parkinson’s disease, which is caused by the death of dopamine-generating cells. Jasanoff’s lab is also working on sensors to track other neurotransmitters, allowing them to study interactions between neurotransmitters during different tasks.

The paper’s lead author is postdoc Taekwan Lee. Technical assistant Lili Cai and postdocs Victor Lelyveld and Aviad Hai also contributed to the research, which was funded by the National Institutes of Health and the Defense Advanced Research Projects Agency.