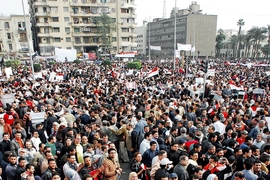 Day after day in early 2011, massive crowds gathered in Cairo’s Tahrir Square, calling for the ouster of Egyptian President Hosni Mubarak. Away from the square, the protests had another effect, as a study co-authored by an MIT professor shows. The demonstrations lowered the stock market valuations of politically connected firms — and showed how much people thought a full democratic revolution was possible.

“When there’s street mobilization, you expect that the future will be different,” says MIT economist Daron Acemoglu, co-author of a paper detailing the results.

The study opens a keyhole into the hopes and fears of Egyptians at a time of great political uncertainty. After weeks of protest, caused in part by perceptions of government corruption, Mubarak resigned in February 2011, replaced by an interim military government. The moment passed, however. In June 2012, the Islamist leader Mohamed Morsi was elected president, only to be replaced by another phase of military rule, starting in July 2013. Military leader Abdel Fattah el-Sisi was then elected president in May 2014 with 97 percent of the vote.

Still, in the first half of 2011, an open democracy seemed conceivable — indeed, a democratic revolution was taking place in Tunisia — and that was reflected in market sentiment. In the nine days of market activity after Mubarak left power, the valuations of the firms most politically connected to his National Democratic Party (NDP) fell by 13 percent relative to other firms.

Moreover, the support for NDP-linked stocks was not shifted to firms linked to other power centers in Egyptian life, including the military or Morsi’s Muslim Brotherhood. Investors were, in part, devaluing the worth of political connections in the country.

“It’s not just redistribution of a given amount of spoils, but perhaps street mobilization is reducing what the market thinks the available spoils are,” Acemoglu says of investor activity in early 2011.

More specifically, Acemoglu adds, some investors thought politically connected firms would be “less capable of capturing rents,” the revenues flowing from noncompetitive business activity, and would have “less room for engaging in these corrupt activities.”

The study also shows a connection to protest-crowd size; an estimated one-day turnout of 500,000 protestors in Tahrir Square would lower the valuation of NDP-connected firms by 0.8 percent relative to other listed firms.

Among its other findings, the study sheds light on the much-discussed relationship between social media and the Arab Spring uprisings of 2011. In this case, the scholars also found that Twitter activity forecast the amount of street protest that would ensue. By itself, social media activity did not immediately affect stock market valuations, but by encouraging public demonstrations, it had an indirect effect.

The paper, “The Power of the Street: Evidence from Egypt’s Arab Spring,” is forthcoming in print form by the Review of Financial Studies and currently appears in advance online form. The authors are Acemoglu, the Elizabeth and James Killian Professor of Economics at MIT; Tarek A. Hassan, an associate professor of economics at Boston University; and Ahmed Tahoun, an assistant professor of accounting at London Business School.

To conduct the study, the researchers used stock-market data concerning 177 firms listed on the Egyptian stock exchange in early 2011, and examined daily closing prices for those firms between 2005 and 2013, as well as total firm assets and leverage (the amount of debt as a fraction of total assets).

Looking at board members and principal shareholders, Acemoglu and his colleagues divided the firms into four main groups: those with connections to the NDP, those with military connections, those with Muslim brotherhood connections, and those that were unconnected to the other groups.

The scholars also used published estimates of crowd sizes from Tahrir Square demonstrations, and to derive the conclusions about Twitter they examined 311 million tweets by over 300,000 Egyptian accounts between Jan. 1, 2001, and July 31, 2013.

In the paper, the researchers consider but largely rule out a couple of alternate explanations for stock market behavior during this time. One would be that Mubarak’s fall simply created instability which affected firms in varying ways. But the study controls for firm-level qualities and industrial sectors, and the devaluation effect was specific to NDP-aligned companies.

A second possible alternative is that the stock market was still expecting top-down control over the Egyptian government, but investors were simply altering their bets and identifying the next group of firms they expected to benefit from useful political connections. Acemoglu says that “is definitely a possibility” in theory, but as the paper notes, “there is no evidence of such offsetting shifts” in market investments.

To be clear, the 13 percent drop experienced by NDP-connected firms shows that many investors were not fazed by the protests, or at least did not expect the protests to lead to massive political changes. On the other hand, a significant portion did think that a ground-up, populist uprising could succeed — even if that ultimately proved not to be the case.

The study’s Twitter data suggest a slightly more subtle picture than some commentators described during the eventful days of 2011. Twitter activity did not lead to immediate stock market effects. On the other hand, protest hashtags did predict the occurrence of large demonstrations, and those protests subsequently moved the market.

“You can scream and shout whatever you want on social media, and it doesn’t [directly] change anything, but if social media acts as a vehicle for people organizing, then it might have an effect,” Acemoglu says.

Acemoglu, who pursues research projects in multiple areas of economics, is perhaps best-known for his work on the relationship between democratic institutions and economic growth, which is summarized in his 2012 book “Why Nations Fail” but remains very much an ongoing project.

At the same time, Acemoglu has conducted a wide-ranging series of studies analyzing and modeling political change in many countries, often with political scientist James Robinson of the University of Chicago. The paper on Egypt flows, in part, from that vein of research. It also builds on other academic studies of other countries, such as a 2001 paper demonstrating that links to the Indonesian government accounted for about a quarter of the value of well-connected firms in that country during the 1990s.

Acemoglu, for one, says he does not anticipate a sea change in Egypt’s current system of government any time soon. The current stasis in the country’s politics makes it all the more useful, however, to consider how fluid the political situation appeared in real time as recently as six years ago.

“Looking at it from the vantage point of 2011, none of that was obvious, that Tunisia would go one way, Egypt would go another way,” Acemoglu says.