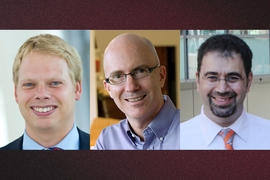 MIT economist Daron Acemoglu and political scientists Richard Nielsen and Charles Stewart III have been named to the 2017 class of Andrew Carnegie Fellows, a prestigious honor supporting research in the social sciences and humanities.

The MIT trio is among 35 scholars and intellectuals receiving the fellowships, which are awarded by the Carnegie Corporation of New York. Each fellow receives up to $200,000 to support a research sabbatical.

Acemoglu, Nielsen, and Stewart are each pursuing long-term scholarly projects relating to political institutions, authority, and legitimacy. The three scholars discussed the nature of their ongoing research with MIT News, and shared their reactions to receiving the Carnegie fellowships.

Daron Acemoglu: The state of growth

Acemoglu, the Elizabeth and James Killian Professor of Economics at MIT, has risen to prominence for studying a wide range of issues, from labor economics to the network effects that can cascasde through economies. His best-known work examines the relationship between political institutions and economic growth.

Working with a variety of colleagues, including James Robinson of Harvard University and Simon Johnson of the MIT Sloan School of Management, Acemoglu has assembled considerable empirical evidence that the development of government institutions and rights for individuals has encouraged economic activity over the last several centuries.

Acemoglu’s ongoing work, backed by the Carnegie fellowship, will continue exploring the relationship between the capacity of states and economic growth. He is currently engaging in more granular studies of state institutions, although still with a wide geographic scope, ranging from the Americas to Africa and Europe.

Acemoglu says he feels “completely honored” by the fellowship. “I just hope I can live up to it,” he adds.

He has also won the John Bates Clark Medal, the Nemmers Prize in Economics, and the BBVA Foundation Frontiers of Knowledge Award; and been elected to the National Academy of Sciences.

Acemoglu was nominated for the fellowship by the National Bureau of Economic Research, where he is a research associate.

After the contested U.S. presidential election in 2000, Charles Stewart III, the Kenan Sahin Distinguished Professor of Political Science at MIT, began devoting an expanded portion of his work to the issue of how well elections function in the U.S.

Stewart was a founding member of the Caltech/MIT Voting Technology Project, which undertook unique empirical analysis of election technologies and management. He also helped develop the Pew Elections Performance Index, which evaluates how well elections are carried out, and this January he became head of the MIT Election Data and Science Lab, a new enterprise aimed at evaluating the effectiveness and integrity of voting.

The Carnegie fellowship will allow Stewart to take an overview of all the questions about elections he has been working on, and analyze the state of democratic voting from a larger perspective.

Stewart describes himself as being “delightfully stunned at getting the news.”

He adds that widely aired claims about the integrity of the latest U.S. presidential election make a sober look at the polling place all the more timely.

When it comes to the integrity of elections, Stewart says, “There is evidence that a lot of Americans still believe in facts and are longing for a clear-eyed analysis about where the challenges are and where they aren’t.”

He describes his method of research as “nonpartisan analysis, allowing the results to go where they may.” And Stewart notes that while academic input helped fix problems that became evident in 2000, there is an ever-evolving set of integrity concerns in elections, including issues such as cyber-security, that need further analysis.

Stewart is an elected fellow of the American Academy of Arts and Sciences and has been a MacVicar Faculty Fellow at MIT.

Richard Nielsen, an assistant professor of political science at MIT, has spent years studying the influence of Islam in politics — often with a distinctively quantitative approach, using data drawn from the Internet to test common assertions.

His forthcoming book, “Deadly Clerics: Violent Convictions, Blocked Ambitions, and the Paths to Jihad,” being published by Cambridge University Press, uses evidence from both fieldwork and the websites of Muslim clerics to examine why some influential clerics adopt militant political ideology and others do not.

Now Nielsen is developing another large book project, combining ethnography and new Internet data to examine how the online world may be changing the nature of Islamic authority overall — both in terms of which kinds of figures retain influence and how they communicate with their followers. His Carnegie fellowship will help the project progress.

“I’m truly humbled” to be in the group of Carnegie Fellows, Nielsen says. “The previous recipients of this award are leaders and mentors in their respective fields, and it's an amazing group to be part of.” The fellowship, he adds, “will open doors for my work by providing both resources and time” for the new book project.