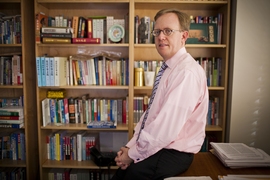 ↓ Download Image
Caption: “Broadly speaking, my research looks at the causes of conflict, especially those involving China,” Taylor Fravel says. He is an associate professor in MIT’s Department of Political Science and a member of MIT’s Security Studies Program.
Credits: Photo: Dominick Reuter

Caption:
“Broadly speaking, my research looks at the causes of conflict, especially those involving China,” Taylor Fravel says. He is an associate professor in MIT’s Department of Political Science and a member of MIT’s Security Studies Program.
Credits:
Photo: Dominick Reuter

MIT political scientist Taylor Fravel has been named to the Andrew Carnegie Fellows Program for the 2016-17 academic year, a prestigious award he will use to extend his studies of Asia’s ongoing maritime disputes.

Fravel told MIT News he was “thrilled, humbled, and honored” to be receiving the fellowship, which is worth up to $200,000. The award, announced today by the Carnegie Corporation of New York, supports “research and writing aimed at addressing some of the world’s most urgent challenges to U.S. democracy and international order,” and focuses on scholars in the social sciences and humanities.

“It is tremendous to have this opportunity to research and write,” says Fravel, who will be on leave from MIT during the forthcoming year.

Fravel is an expert on China’s military strategy and the country’s post-World War II history of conflict resolution. His first book, “Strong Borders, Secure Nation: Cooperation and Conflict in China's Territorial Disputes,” published by Princeton University Press in 2008, scrutinizes 23 postwar territorial conflicts China has been involved in, and concludes that much of the time — in 17 of those cases — China made territorial concessions in agreements that helped it achieve other goals.

His second book, “Active Defense: Explaining the Evolution of China's Military Strategy,” will take a wide-ranging look at many aspects of Chinese defense strategy in the postwar era. It is also under advance contract with Princeton University Press.

“Broadly speaking, my research looks at the causes of conflict, especially those involving China,” Fravel says. He is an associate professor in MIT’s Department of Political Science and a member of MIT’s Security Studies Program.

The Carnegie fellowship will enable Fravel to pursue a new project in which he will look in more detail at the maritime disputes that have emerged in Asia over the last several years. China has been at odds with other countries over territorial claims to a series of small islands — including the Spratly Islands in the South China Sea, also claimed in whole or in part by Vietnam, Taiwan, the Philippines, Malaysia, and Brunei.

“Since the first book came out, China’s [maritime] disputes have become much more active,” says Fravel, who adds he will be “trying to put those events in a broader context.”

Modest as the stakes over the islands might seem on the surface, they are intertwined with larger political dynamics in the region. For this reason and others, Fravel’s expertise has been in increasing demand recently, among scholars, policymakers, and other foreign-policy professionals.

Fravel says more time for research will enable him to better “survey and examine the various conflict management tools that can help prevent escalation” of these disputes. Those tools potentially include international arbitration, codes of conduct among claimants in the disputes, and arms-control-style agreements among countries to limit activities such as troop deployments.

“The idea is to explore them in more detail,” Fravel says.

Fravel received his BA in history from Middlebury College. He earned two master’s degrees: one from Oxford University in philosophy, politics, and economics, and one from the London School of Economics in international relations. Fravel earned his PhD in political science from Stanford University in 2004. He has been a member of the MIT faculty since 2004.