Caption:
Taylor Fravel, an associate professor in the Department of Political Science and member of the Security Studies Program at MIT.
Credits:
Photo: Dominick Reuter 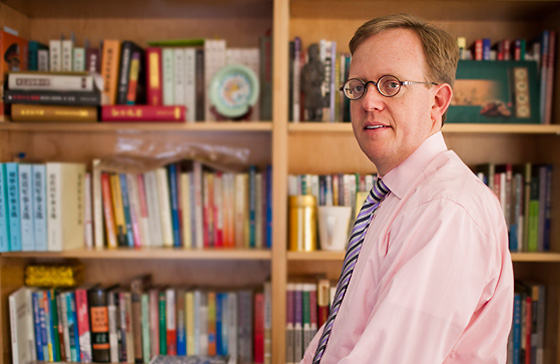 When Taylor Fravel was a teenager, his father, an engineer for Bechtel, accepted a job in Taiwan. It turned out to be a significant career move for both of them.

Up until that point, the younger Fravel had barely been outside of his native Michigan. After two years as a high school student in the Far East, though, he was engrossed by the new culture and society he had seen, and determined to learn more about it.

“For me it was a really transformative experience,” says Fravel, who began to learn the language in Chinese-speaking Taiwan while attending an American school. “I came back fascinated with that part of the world and had a very strong desire to learn Chinese more formally.”

Today, Fravel is an associate professor in the Department of Political Science and a member of the Security Studies Program at MIT, with a distinctive specialty: Chinese foreign policy. While there has been increasing interest in China’s economic growth and social policies among Western observers, relatively few people have examined how China conducts international relations. What are its foreign-policy practices? How willing — or reluctant — is China to use its military?

Fravel’s work has gained attention because of an unanticipated finding growing out of his doctoral research: In the last several decades, to a greater extent than has been generally understood, China has often struck pragmatic compromises in foreign-policy disputes with its neighbors. Fravel’s 2008 book, Strong Borders, Secure Nation: Cooperation and Conflict in China’s Territorial Disputes (Princeton University Press), reveals this tendency and analyzes the reasons for it.

Diplomatic resolutions, most of the time

As Fravel tells it, one root of his current research actually extends back further than his time in Taiwan. “I’d always had a fascination with military history,” Fravel, 40, recounts, “which is not your normal childhood passion.” By middle school, Fravel was a habitué of the original Borders bookstore in Ann Arbor, Mich., and had read virtually all of the major memoirs written about the Vietnam War.

Still, it took living in Taiwan for this preoccupation to combine with a focus on Chinese politics and history. “My interest in China and in international relations occurred in a way that wasn’t planned and never would have happened if my father hadn’t been transferred overseas,” Fravel says.

He studied Chinese as well as the history of China as an undergraduate at Middlebury College in Vermont, then received a pair of master’s degrees, one from Oxford University in PPE — philosophy, politics and economics — and one from the London School of Economics in international relations. Fravel earned his PhD in political science from Stanford University in 2004.

Fravel’s dissertation and book come from a careful cataloguing of Chinese border disputes over the last several decades. What he found is that China is willing to redraw lines on the map to suit other aims.

“A conventional narrative of China is that national sovereignty is one of the sacred pillars of the Communist Party, along with growth, and they would never do anything to compromise it,” Fravel says.

The reality, he notes, is that China has “been willing to compromise with neighbors when something becomes more valuable than land for them. That doesn’t mean that China will compromise on every dispute. But it wasn’t what I was expecting to find.”

In his work, Fravel catalogues 23 such territorial conflicts since 1949, 17 of which have been settled diplomatically; in those cases China has usually received less than 50 percent of the land in question. “Regime insecurity,” Fravel has written, “best explains China’s many attempts to compromise in its territorial disputes.”

These border disputes have often occurred around land frontiers far removed from Beijing; typically China has been willing to concede territory in return for foreign cooperation that strengthens its political control over the areas it does retain. In these cases, Fravel says, China can be “cooperative” without being “benign.”

Currently, Fravel, who was granted tenure at MIT earlier this year, has a second book underway, which will examine the changes in China’s military doctrine since 1949. Titled Active Defense: Explaining the Evolution of China’s Military, the book examines several key moments of transition when China recognized new forms of warfare being employed by potential rivals and sought to update its own capabilities accordingly.

These subjects are not always easy to study. Fravel conducts research using materials from Chinese government archives — which generally provide only limited access — while also drawing on interviews with relevant figures for information.

Still, research in China has become easier in recent years, as the country continues to open up. “The proliferation of information out of China, both online and in print, is remarkable,” Fravel says. “There has been an explosion of it in the last 15 or 20 years.” And Chinese officials and scholars are more likely to travel to the United States than ever before. “It always used to be you had to go to China to do interviews,” Fravel adds.

So people no longer need formative experiences living in the Far East to begin studying China. Although as Fravel’s career shows, it doesn’t hurt.