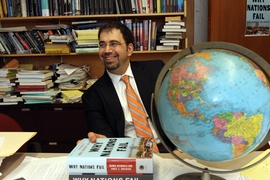 MIT economist Daron Acemoglu has won this year’s BBVA Foundation Frontiers of Knowledge Award for Economics, Finance, and Management, in honor of his prolific research contributions that have helped reshape his discipline over the last two decades.

The BBVA Foundation awards, now in their ninth annual edition, have become high-profile prizes across a range of disciplines. The foundation honors recipients in eight intellectual and artistic categories for “contributions of broad impact for their originality and theoretical significance,” including “research work that successfully enlarges the scope of our current knowledge.”

Acemoglu was making a family visit to Boston’s Museum of Science on Monday when he started receiving messages notifying him about the award.

“I am deeply honored, and of course absolutely delighted,” Acemoglu said in a statement he sent to MIT News. “I am also humbled when I looked at the list of former recipients of this award, which includes many of the people in our profession I very much respect, admire and look up to. I am also very thankful to my colleagues in the economics department and MIT for providing the perfect environment for my research over the years."

The uniquely productive Acemoglu, who is the Elizabeth and James Killian Professor of Economics at MIT, has done groundbreaking work on a variety of topics in economics.

In the public sphere, Acemoglu’s best-known research concerns the relationship between political systems and economic growth. In a long series of papers and multiple books with global scope, Acemoglu and some colleagues — including James Robinson of Harvard and Simon Johnson of MIT — have built an empirical case that the development of governmental institutions with significant rights for individuals has spurred greater economic activity over the last 500 years.

In a related line of research, Acemoglu and his colleagues, while examining the relationship between institutions and growth, have also built an extensive series of models to account for political changes in many countries — including the expansion of rights and the development of specific government activities.

However, Acemoglu has made notable contributions to research topics in other areas of economics. In labor economics, for instance, Acemoglu’s work has helped explain how the wage gap between higher-skill and lower-skill workers persists despite an abundance of highly-trained workers. Among other things, Acemoglu’s published work has also shown why firms benefit from investing in improved skills for their employees, despite the possibility that those workers might move to other employers or require higher wages.

More recently, Acemoglu has published influential papers on the characteristics of industrial networks and their large-scale implications for economies. Working with a variety of collaborators, Acemoglu has shown how economic shocks within particular industrial sectors can sometimes produce cascading effects that propagate through an entire economy. This work has helped economists re-evaluate some long-held ideas about the aggregate performance of economies, and, like much of Acemoglu’s research, opened up new ground for empirical exploration.

All told, Acemoglu has authored or co-authored over 120 peer-reviewed papers and published four books, including “Why Nations Fail,” in 2012, which synthesized much of his research about political institutions and growth. He has advised over 60 PhD students at MIT.

"The BBVA Foundation’s award recognizing extraordinary achievement is richly deserved by our colleague Daron Acemoglu," said Melissa Nobles, Kenan Sahin Dean of MIT's School of Humanities, Arts, and Social Sciences. "His research reveals significant new insights about a range of economic realities —  including the profound role of democratic institutions in generating economic growth — and will inform 21st century policy for decades to come. On behalf of the school community, I offer warmest congratulations to Daron, and our ongoing gratitude for his research."

David Autor, Ford Professor of Economics at MIT, and associate head of the Department of Economics, added: "Daron Acemoglu is quite simply the most outstanding economist of his generation and an extraordinary public intellectual. Daron’s work is as relevant to the prosperity and well-being of contemporary citizens and societies as it is inspiring to the worldwide community of economists."

Acemoglu received his BA from the University of York, in England, and his MS and PhD, in 1992, from the London School of Economics. He joined the MIT faculty in 1993 and has spent his entire career as a professor at the Institute.

In addition to the BBVA Foundation frontiers of Knowledge Award, Acemoglu received the Nemmers Prize in Economics in 2012, and in 2005, the John Bates Clark Medal, awarded by the American Economic Association to the top economist in the U.S. under the age of 40 (it was then a biennial award, and is now bestowed annually).

A few other MIT faculty have previously been given BBVA Foundation awards, including MIT’s Abdul Latif Jameel Poverty Action Lab (J-PAL), which was co-founded by MIT economists Esther Duflo, Abhijit Banerjee, and Sendhil Mullainathan (now of Harvard University). J-PAL’s award, in 2009, was in the category of Development Cooperation.

Other MIT winners include neuroscientist Edward Boyden, for Biomedicine, in 2016; chemistry professor Edward Buchwald, for Basic Sciences, in 2015; and climate scientist Susan Solomon, in 2013, for the Climate Change category.

The BBVA Foundation is based in Madrid, Spain, and works with the Spanish National Research Council (CSIC) in the organization and granting of the awards.