Dean Kamen: “The magic is out there!” 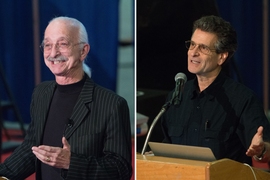 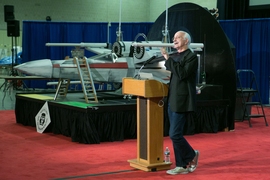 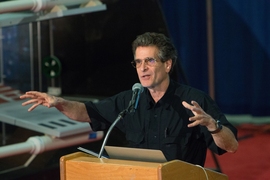 Two superstars in the world of engineering — Dean Kamen, inventor of the Segway transporter and the stair-climbing wheelchair iBot, and Woodie Flowers, MIT professor emeritus and former host of PBS’ “Scientific American Frontiers” — in back-to-back talks to students at MIT last week touted the fun, satisfaction, and potential for global impact that careers in engineering can provide.

Kamen also provided details of a new $300 million public-private partnership that he heads, designed to bring large-scale production to new technologies aimed at providing artificially-produced tissues and even whole organs to people with serious injuries or disease.

The talks, called Inspiring Engineering, preceded the annual head-to-head robotic competition that is the culmination of the mechanical engineering class 2.007 (Design and Manufacturing I). Both speakers described the history and remarkable growth and popularity of the robotic competition for high-school students called FIRST (For Inspiration and Recognition of Science and Technology), which Kamen and Flowers co-founded in 1992.

That competition was designed to inspire students to enter STEM fields (science, technology, engineering, and math) by infusing those subjects with the glamour, excitement, team spirit, and friendly competitiveness usually associated with team sports. It has grown from an initial 28 U.S. teams competing that first year to 44,000 teams around the world last year, and total awards of $50 million in scholarships. This summer, for the first time, FIRST Global will launch a competition intended to include teams from every nation on Earth, Kamen said. So far, 161 nations have committed to participate.

Flowers, who is the Pappalardo Professor Emeritus of Mechanical Engineering at MIT, founded the original precursor of 2.007 in 1970 and ran the class for more than two decades. The concept he introduced, of having students spend a full semester designing and building a device that would compete one-on-one against those of other students in a competition at the end of the semester, was immediately popular. The competitive finale quickly became one of MIT’s most anticipated annual events — and was the inspiration for the creation of FIRST.

Flowers emphasized the difference between “education” and “training,” saying that much of what passes for education really falls into the latter camp — preparing young people for the kinds of tasks that are the most likely to be taken over by robots and artificial intelligence. Real education, he suggested, should focus on open-ended tasks that encourage creativity, inventiveness, and cooperation.

“Societies get the best of what they celebrate,” Flowers said, emphasizing that if sports and entertainment are the most rewarded activities, young people are in for a lot of disappointment since the vast majority of them will never achieve careers in those areas. Education that emphasizes problem solving, as the 2.007 and FIRST competitions strive to do, instead encourage patterns of learning that could lead to productive and meaningful work, tackling the world’s many serious problems.

Kamen, who runs an invention-centered company called Deka based in Manchester, New Hampshire, described a program that he initiated, called the Advanced Regenerative Manufacturing Institute (ARMI). The venture builds on Kamen’s long history of creating biomedical devices to improve people’s lives. The iBot, which is about to be relaunched in partnership with Toyota, was the first wheelchair that could not only climb stairs but also traverse difficult surfaces such as sand, and enable its users to “stand” so they can be at eye-level with others. He also developed a portable insulin infuser, a sophisticated prosthetic arm for amputees, and water purifying devices for remote locations.

The new public-private consortium, he said, is intended to develop ways to scale up production of technologies to produce tissues, such as growing artificial skin for grafts, which have been under development in labs around the country. ARMI received an $80 million grant from the Department of Defense last December and about $220 million in funding from the 87 companies and institutions (including MIT) that are partners in the project.

These research institutions, Kamen said, in many cases have already developed such regenerative technologies in laboratory-scale tests, including work that could lead to 3-D “printing” of entire organs for transplantation, but they have not been able to cross the chasm that separates promising research from actual commercial production. These universities and research hospitals “have the technologies to generate tissues, but none of them have yet left the lab. The magic is out there — now we have to scale it.”

Although Kamen’s company focuses entirely on invention — “we don’t make anything,” he said, but rather develop new products and then license their production — he nevertheless sees invention as “a last resort.” Whenever possible, he advised, use solutions that already exist: “Everything you can find that somebody else has done that works, use it!”

Although Kamen intended the FIRST competition to be self-sustaining once he got it started, that was far from the case — it has taken up much of his time in all the years since its founding, he said. He has garnered support for the project from four U.S. presidents and many foreign leaders, including former Israeli Prime Minister Shimon Perez, who initially persuaded him to make the program international, and movie stars including Morgan Freeman, an early supporter who lent his voice to promotional videos.

A study by researchers at Brandeis University, he said, found that students who took part in FIRST events were 50 percent more likely to go to college, and that girls who took part were four times more likely to pursue technology or engineering majors. This year’s first-ever FIRST Global, he said, will take place in July in Washington’s Constitution Hall.

This kind of competition, Kamen said, fosters skills that prepare youngsters for the kinds of tasks that can lead to truly productive careers. “We have the only sport,” he said, “where every kid can turn pro!”