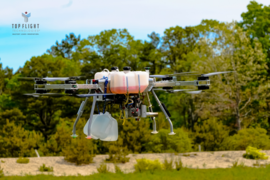 MIT alumnus Long Phan SM ’99, PhD ’12 is a technology innovator and entrepreneur with several engineering “firsts” under his belt.

In the mid-1990s, Phan helped build the Draper Small Autonomous Aerial Vehicle, the world’s first fully autonomous helicopter. While working on Wall Street in the early 2000s, he became an early pioneer of the high-frequency trading system, which consists of powerful computers that rapidly complete tons of trading transactions.

As co-founder, CEO, and chief technology officer of Top Flight Technologies, Phan is now one of the first entrepreneurs to commercialize hybrid gas-to-electric drones. The drones offer an order-of-magnitude increase in range, payload size, and power over battery-powered counterparts.

Coming to market this fall, the hybrid drones could help make drone package-delivery a reality, and enhance capabilities for crop imaging, military surveillance, emergency response, and remote infrastructure inspection, among other applications. As the startup continues to develop hybrid drone power sources, the technology could also pave the way for human flight.

“The key is having an abundance of power and total energy. That’s what petrol and  gasoline gives you,” Phan says. “Using a high-energy-density energy source like gasoline, and converting it to electric power, and doing it efficiently, gives you the equivalent of a ‘super battery.’”

Many drones run on batteries, flying for 15 to 30 minutes between charges, with maximum payloads of 5 pounds. Top Flight’s drone can fly for more than 2.5 hours ­— enabling ranges of up to 100 miles — while carrying up to 20 pounds.

The drone can be customized for any number of industrial-strength applications. The engine weighs about 17 pounds and can generate up to 10 kilowatts of power. It uses gasoline to generate the power that drives the lift motors, keeps backup batteries charged, and powers onboard electronics including computing, sensors, and communications equipment. The onboard batteries never need recharging; users just need to refill the gas tank and fly again. Flight control can operate in fully-or semi-autonomous modes.

With the hiring of several MIT alumni, the startup is quietly developing a 100-kilowatt hybrid drone that can lift 100 kilograms — enough to carry a human or two — for up to three hours. NASA, Uber, and many aerospace companies worldwide are currently working on building air taxis, small autonomous planes that will shuttle people around in big cities. But, Phan says, these can stay airborne for only about 10 minutes. Top Flight’s technologies will make them more practical for hauling people from hub to hub.

“With a 100-kilowatt hybrid electric engine, concepts like air taxis become viable,” he says. “By 2020, you may see a drone fly a person.”

“A Toyota Prius for the sky”

Top Flight’s story began in the late 2000s, when Phan was recalled to MIT twice to solve different engineering problems — both times leading to startups.

In 2009, Phan’s former advisor Sanjay Sarma, now the Fred Fort Flowers and Daniel Fort Flowers Professor in Mechanical Engineering and vice president for open learning, asked him to enroll in a PhD program to work on wide area thermal imaging. Phan’s research became a core of Phan and Sarma’s startup Essess, which deploys cars with thermal-imaging rooftop rigs that create heat maps of homes and buildings to detect energy leaks.

In 2014, Robert Shin, head of the Intelligence, Surveillance, Reconnaissance and Tactical Systems Division at MIT Lincoln Laboratory, approached Phan and asked him to help solve the payload and endurance problems for drones.

Phan and other MIT researchers took a shot at the problem by conceptualizing and designing microscale hybrid electric-gas engines for drones. “We said, ‘What if we build a Toyota Prius for the sky?’” Phan says, laughing.

Hybrid electric engines are easier to build in cars, because, among other things, there are fewer weight and volume restraints. Engines on drones must be small and lightweight while delivering the same amount of power. This produces major technical challenges with excessive vibration and heat. “Often the engine will literally melt because you’re running it so hot,” Phan says.

Using various heat transfer and control techniques — such as strategically incorporating small fans, cooling fins, and rubber vibration dampeners — the team solved those issues and initially slapped a prototype hybrid engine on a generic drone. Their calculations predicted the hybrid drone would fly for an hour — but it flew for nearly 2.5 hours.

“The lightbulb went off,” Phan says. “We were like, ‘What else can you do with a drone that can fly for hours?’”

Phan founded the startup in 2014, along with Sarma and other MIT engineers, and set up operations in a remote-controlled helicopter hobby shop in Malden, Massachusetts, before opening a separate headquarters in that city in 2016. A couple of funding rounds pushed them past $2 million of early venture funding by 2015.

Over the past several years, Top Flight has continued to develop major innovations for the microscale hybrid engine concept, called a “digital gearbox.” Engines for vertical takeoff aircraft, such as helicopters, are complex and difficult to manage, consisting of thousands of mechanical parts. Top Flight’s digital gearbox behaves like those systems but uses electricity to control everything. Gasoline runs to a small generator, creating electric power, which the digital gearbox controls and sends in pulses to the electric motors and electronics. This makes the powering flight much simpler and more efficient, Phan says.

“By pulsing the electricity to the motors, we can control the amount of torque and revolutions per minute of the motor,” Phan says. “We can … achieve the same benefits as a traditional mechanical transmission system, but it’s much more efficient, cost-effective, and scalable.”

Today, Top Flight operates in what it calls “agile aerospace 2.0,” a term representing the valuable vertical range for drones and microsatellites starting from the ground level and rising to 400 feet. Flying closer to the ground means greatly enhanced imaging and sensing resolutions, and other capabilities, such as communications. “If you go outside today, there’s virtually nothing happening in agile aerospace,” Phan says. “But it makes the most sense [for] air taxis or inspecting power lines, or doing logistics or delivery.”

Immediate applications for Top Flight’s drone capabilities may include inspecting infrastructure in remote areas. Some U.S. utilities companies are already tasking drones with inspecting power lines and pipelines that go without routine inspection due to their remote locations. Top Flight’s drones could greatly increase the range of those drones while reducing costs and improving worker safety. They could also help pre- and post-disaster recovery efforts by surveying damage to the networks after natural disasters.

As for delivery drones, Phan says Top Flight can increase the overall value related to increased range. Amazon, Google, UPS, and other large international firms are developing drone-based solutions that can deliver packages to consumer doorsteps. But they’re restricted to carrying, say, a single textbook and maybe 30 minutes of battery life, limiting their range.

“By increasing the range by an order of magnitude, you can capture 100 times more value, due to the increased area coverage, compared to traditional battery drone systems,” Phan says. “[Delivery drones] are not just a gimmick. They’re very feasible soon.”

Top Flight’s drones also hold promise for improved military missions, Phan says. A flock of 1,000 small drones could be deployed for longer times to gather reconnaissance data at a cost similar that of a single large military aircraft.

When Top Flight completes its 100-kilowatt hybrid electric engine, that same concept could also be used to haul, say, barrels of oil, divided into smaller amounts for military convoys in dangerous zones. Generally, this type of shipping is expensive and hazardous due to transportation costs and various risks on the road. “Instead of carrying really big loads in the tons, you use many drones to carry small loads in the 100-kilogram increments, like a pack of mules,” Phan says.

Currently, Top Flight uses an internal combustion engine in its microscale hybrid power systems. Moving forward, the company aims to hybridize gas turbine engines, which are used to power jets and helicopters. “Heat and vibration issues will be magnified, but at the same time they’re much more powerful and almost 100 percent more energy efficient than comparably-sized internal combustion engines,” Phan says. “That’s our next challenge.”

The big picture on energy loss