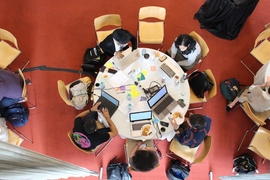 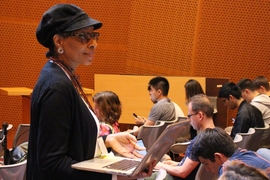 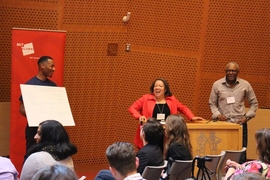 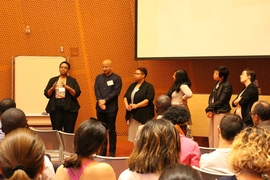 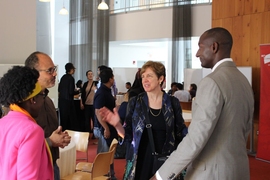 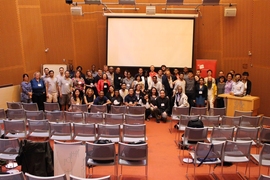 Caption:
Lisa Egbuonu-Davis ’79 presents her “playbook” for underrepresented minorities in STEM, with her team.

Caption:
Left to right: Robbin Chapman SM ’09, PhD ’06 presents alongside her group including Trishan Panch, a lecturer in the Health, Sciences, and Technology program; Kishonna Gray, a visiting professor in the Women’s and Gender Studies program; Maia Majumder SM ’15, and MIT graduate student.

Caption:
Participants of Hacking Discrimination gather for a photo on the final day of the hackathon.

In July 2016, feeling frustrated about violence in the news and continued social and economic roadblocks to progress for minorities, members of the Black Alumni of MIT (BAMIT) were galvanized by a letter to the MIT community from President L. Rafael Reif. Responding to a recent series of tragic shootings, he asked “What are we to do?”

BAMIT members gathered in Washington to brainstorm a response, and out of that session emerged a plan to organize a hackathon aimed at finding technology-based solutions to address discrimination. The event, held at MIT last month, was called “Hacking Discrimination” and spearheaded by Elaine Harris ’78 and Lisa Egbuonu-Davis ’79 in partnership with the MIT Alumni Association.

The 11 pitches presented during the two-day hackathon covered a wide range of issues affecting communities of color, including making routine traffic stops less harmful for motorists and police officers, preventing bias in the hiring process by creating a professional profile using a secure blockchain system, flagging unconscious biases using haptic (touch-based) feedback and augmented reality, and providing advice for those who experience discrimination.

Hackathon winners were selected in three categories – Innovation, Impact, and Storytelling – and received gifts valued at $1,500. The teams also received advice from local experts on their topics throughout the second day of hacking.

The Innovation prize was awarded to Taste Voyager, a platform that enables individuals or families to host guests and foster cultural understanding over a home-cooked meal. The Impact prize went to Rahi, a smartphone app that makes shopping easier for recipients of the federally funded Women, Infant, and Children food-assistance program. The Storytelling prize was awarded to Just-Us and Health, which uses surveys to track the effects of discrimination in neighborhoods.

As Randal Pinkett SM ’98, MBA ’98, PhD ’02 said in his keynote speech, “Technology alone won't solve bias in the U.S.,” and the hackathon made sure to focus on technology’s human users. Under the guidance of Fahad Punjwani, an MIT graduate student in integrated design and management, the event’s mentors ensured that participants considered not just how to deploy their technologies but also the people they aimed to serve.

With a human-centered design process as the guideline, Punjwani encouraged participants to speak with people affected by the problem and carefully define their target audience. For some, including the Taste Voyager team, which began the hackathon as Immigrant Integration, this resulted in an overhaul of the project. Examining their target audience led the team to switch their focus from helping immigrants integrate to creating a way for people of different backgrounds to connect and help each other in a safe space.

“We hacked the topic of our topic,” said Jennifer Williams of the Lincoln Laboratory’s Human Language Technology group, who led the team.

The Rahi team, which was led by Hildreth England, assistant director of the Media Lab’s Open Agriculture Initiative, also focused on the user as it attempted to improve the national Women, Infants, and Children (WIC) nutrition program by acknowledging the racial and ethnic inequalities embedded in the food system. For example, according to Feeding America, one in five African-American and Latino households is food insecure — lacking consistent and adequate access to affordable and nutritious food — compared to one in 10 Caucasian households.

The team created mockups for a smartphone app and focused on improving “the experience of using it before [shopping], and then in a store because that’s where all of the problems are,” explained England. In some states, WIC recipients have only a sheet of paper listing the foods available through the program.

During the first day of the event, speeches by Kirk Kolenbrander, vice president at MIT; J. Phillip Thompson, associate professor of urban studies and planning; and Shannon Al-Wakeel, executive director of the Muslim Justice League, reminded participants of the past and current social justice issues needing solutions. The following morning, in a keynote address, Pinkett stressed the strengths and weaknesses that come with cultural differences. "Our greatest strength is our diversity; our greatest liability is in our cultural ignorance," he said.

A Hacking Discrimination Fund, which was announced at the event, has been created to support undergraduate and graduate students addressing racism and discrimination through events such as the hackathon, development of sustainable community dialogue, contest development, and other activities that specifically address racism in the U.S. The fund’s emphasis will be placed on solutions that aim to overcome challenges to safety or economic and professional success for populations that have historically been victims of racism.

Taking on gender gaps in health care and technology