Taking on gender gaps in health care and technology 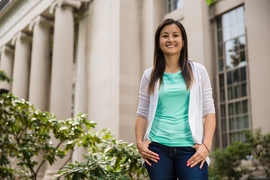 ↓ Download Image
Caption: “There's a lot of role models here [at MIT], and sometimes, in Chile or in Mexico or in Costa Rica, [girls] don't know that there's a graduate student or an undergrad doing these cool things at MIT,” says grad student Alicia Chong Rodriguez. “I think it's a matter of just connecting the dots.” 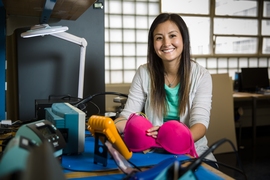 ↓ Download Image
Caption: “There's a lot of role models here [at MIT], and sometimes, in Chile or in Mexico or in Costa Rica, [girls] don't know that there's a graduate student or an undergrad doing these cool things at MIT,” says grad student Alicia Chong Rodriguez. “I think it's a matter of just connecting the dots.”

Caption:
“There's a lot of role models here [at MIT], and sometimes, in Chile or in Mexico or in Costa Rica, [girls] don't know that there's a graduate student or an undergrad doing these cool things at MIT,” says grad student Alicia Chong Rodriguez. “I think it's a matter of just connecting the dots.”
Credits:
Photo: Casey Atkins

When Alicia Chong Rodriguez first toured the MIT campus as a high school student, she was so impressed by everything she saw that she still remembers excitedly phoning her mom back home in Costa Rica, calling collect from a pay phone in the student center.

“It’s the first time I was faced with the fact that people create the things that we use,” says Chong, who has always been interested in technology and computers. “I felt like I could do that too.”

Chong’s life has taken many twists and turns in the years since, but she is finally back at MIT as a master’s candidate in the inaugural class of the Integrated Design and Management Program. There, she is using her electrical engineering skills to combat cardiovascular disease in women, while also encouraging and inspiring young Latinas to pursue careers in technology.

Chong, who grew up in San José, Costa Rica, describes her family as very international, and she always assumed she might attend college elsewhere. After visiting MIT, her interest in technology spurred her to fill out an application, but she realized the timing wasn’t right for her family to take on the financial cost. Instead, Chong spent two years studying at the Instituto Tecnológico de Costa Rica before traveling to Mexico to earn her bachelor’s degree in electronic and computer engineering at Tecnológico de Monterrey. It was during her undergraduate courses, where there would often be two or three women in a class of 40, that Chong was faced with the stark reality of gender inequality in engineering.

“Before that I thought we all have opportunity to study whatever we want now,” she says. “But there's a lot of bias, and I started understanding it and learning more about it, and becoming really interested in these issues.”

Chong banded together with her fellow women in engineering and started a group called Mujeres en Tecnología (Women in Technology) or MenTe, to help them motivate and empower each other. The group quickly gained momentum — the members began visiting local high schools, inviting interesting guest speakers to campus, and even attending international conferences.

After college, Chong returned to Costa Rica, where she spent six years working in engineering roles at tech companies Teradyne, Inc. and HP Networking. She knew she wanted to return to school but was unsure of what she wanted to study until she came across a three-month summer program that caught her attention.

“I found this program at Singularity University [in Silicon Valley] that mixes technology with social impact,” she says. “I saw people who were using technology to solve world problems, and that was really interesting.”

Around the same time, Chong discovered MIT’s newly minted program in Integrated Design and Management (IDM) and decided to apply. She was accepted to both programs on the same day, and it was during her summer at Singularity University that she uncovered a passion she is now pursuing at MIT: health care.

While at Singularity, Chong was shocked to learn that cardiovascular disease affects one in three women worldwide, and mortality rates continue to climb as women are frequently misdiagnosed or not treated.

“There's a lot of things about the physiology of women we don't know yet,” says Chong. “There's a data gap. So there I could combine my passion for gender issues and the technical challenge of creating a medical device for this purpose.”

Chong and four of her classmates began thinking about body sensors that could be used for data collection on cardiovascular health, and came up with a seemingly obvious solution: a bra with built-in sensors.

“It just makes so much sense,” she says. “You wear the bra every day, you will never forget to put it on, it's so comfortable, you don't have to think about it. It's located in a clever part close to getting the signals of the heart.”

The team launched a startup called Bloomer Tech (named after women’s rights advocate Amelia Bloomer), and during her first year at MIT Chong put her electrical engineering skills to work developing prototypes. The idea is simple: Medical-grade sensors, integrated into the bra as washable, flexible circuits, monitor heart activity and communicate to a smartphone application via Bluetooth. The app transforms the information into a format that is accessible to the patient and her doctor, allowing convenient, long-term monitoring. Bloomer Tech will first market the bras for women who have already had one cardiac episode, and support them with technology tools as they undergo life changes.

Chong is currently working on her third prototype and recently realized she can use the power of social media to help improve her design.

“We have decided to dig deeper into what patients really want and design it with the patients,” says Chong. “There are super-huge communities of heart disease survivors on Facebook, so we want to ask them to help us. We want to provide them the data that matters to them the most.”

Along the way, Chong has met many people at MIT who have helped her with various aspects of Bloomer Tech, from app creation to narrowing down her target demographic. She has also been part of several programs through the MIT Science and Technology Initiatives (MISTI). A MISTI Seed Grant sent her to Peru, where she organized workshops on cardiovascular health, with the support of Pratik Shah, her professor in an engineering health course she took in the fall. The grant also allowed one of her cofounders to come to MIT. MISTI also provided support for Chong to visit a heart research institute in India and participate with the MIT Media Lab Camera Culture Group as a mentor at the Emerging Worlds, Innovating for Billions event in Nashik, India, and to learn about mass production and scaling in the new MIT Kickstart program in Hong Kong and Shenzhen.

Empowering the next generation

Even in the midst of launching a startup and working on a master’s degree, Chong hasn’t lost sight of what started her on this journey — the gender inequality she noticed as an undergraduate in Mexico. Chong realized that there are many Latinas in tech at MIT, so she applied, along with Colombian IDM student Maria Fernanda Tafur, for a student life grant through the Office of the Dean for Graduate Education to fund an MIT chapter of MenTe. First, the group members are connecting women on campus to each other through a dinner series; next, they aim to connect them to organizations in Latin America devoted to encouraging girls to pursue careers in tech.

“There's a lot of role models here, and sometimes, in Chile or in Mexico or in Costa Rica, [girls] don't know that there's a graduate student or an undergrad doing these cool things at MIT,” says Chong. “I think it's a matter of just connecting the dots.”

In Costa Rica, Chong also is part of the nonprofit organization Ideas en Acción that  launched a 12-week program called MenTe en Acción, for 15- to 19-year-old girls in communities at social risk. Through the program, girls build a mobile app with MIT App Inventor and are exposed to different technology careers, while learning about leadership, entrepreneurship, and female empowerment.

Lately, Chong has garnered a lot of attention for her work, ranging from invitations to speak at conferences, to a cover story for Revista Perfil (the Costa Rican equivalent of Glamour), a turn of events she describes as amazing, if slightly surreal, and one that propels her forward in her work.

“Sometimes I feel like everything is happening so fast, it's so cool, it matches so well, I still can't believe it,” she says. “Right now, I'm learning so much, and getting excited all the time, and meeting a lot of cool people. It has been a wonderful experience.”

Forbes reporter Marija Butkovic spotlights Alicia Chong Rodriguez MS ’18, Founder and CEO of Bloomer Tech, for her work in building a cardiovascular disease and stroke database that can generate non-invasive digital biomarkers. “We envision a world where the future of AI in healthcare performs the best it can in women,” says Chong Rodriguez. “We also have created a digital biomarker pipeline where our digital biomarkers can explain, influence, and even improve health outcomes for women.”

NPR’s Ted Radio Hour spotlights the work of Alicia Chong Rodriguez SM ’17, SM ’18, who is trying to address the gaps that exist in women’s health data through a smart bra that can be used to acquire physiological data. Chong’s startup BloomerTech has “built medical-grade textile sensors that can adapt to multiple bra styles and sizes for continuous, reliable and repeatable data all around her torso and her heart.”

Alicia Chong Rodriguez SM ’17, SM ’18 speaks with Boston Globe reporter Pranshu Verma about the inspiration for her startup BloomerTech, which is focused on addressing heart disease in women, and the underrepresentation of women in clinical trials. As part of this effort, BloomerTech is developing a “sensor-enabled bra that feeds real-time heart data to doctors running clinical trials on women’s cardiovascular disease.”

Taking many forms of expertise to heart