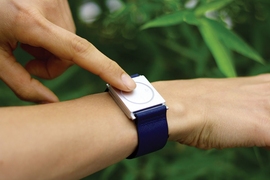 People with epilepsy suffer from recurrent, unprovoked seizures that can cause injury and even death from “sudden unexpected death in epilepsy” (SUDEP), a condition that occurs minutes after a seizure ends.

Researchers worldwide are using a scientific version of the wristband, called the E4, which also measures other signals, to study epilepsy and other neurological and psychiatric conditions. Numerous academic papers are now published, showing that the combined electrodermal activity (EDA), also known as skin conductance, and motion data collected from the wrist improve the accuracy of seizure detection over using only motion data.

Now Empatica is prepping to release Embrace, “a consumer-looking, but medical-quality device” for monitoring stress and seizures, says Picard, a professor of media arts and sciences in the MIT Media Lab and Empatica’s chief scientist. After a successful Indiegogo campaign last year, the beta version of Embrace shipped to backers last Friday.

Apart from detecting seizures, anyone can also use the wristbands to monitor stress levels — which is important for good health, Picard says. Chronic stress has been linked to numerous health issues such as heart disease, obesity, and diabetes. “Stress signals reach every organ of your body, so these stress signals are potentially influencing everything,” Picard says. “Sometimes you don’t realize [you’re stressed] until you get that just-in-time notice.”

Better stress detection for all

According to the World Health Organization, roughly 50 million people worldwide suffer from epilepsy. The Centers for Disease Control and Prevention estimates about one in every 1,000 people with epilepsy die annually from SUDEP, a possible result of suffocation from impaired breathing, fluid in the lungs, or seizing while sleeping face down. Rates are significantly higher for people who have had at least one grand mal seizure — one of the most dangerous types of seizures — in the past year, Picard says.

With Embrace, Empatica aims to aid people suffering from epilepsy by helping them better alert loved ones, Picard says. An app that comes with Embrace lets wearers and others monitor when the person might be having a grand mal seizure.

The wristbands resemble watches but have a solid silver or black face. Sensors underneath the face track pulse, body motion, temperature, and EDA, which involves subtle electrical changes across the skin. Boosts in EDA, without accompanying changes in motion, can signal stress. In people with epilepsy, a sharp rise in both signals could indicate a severe, potentially life-threatening seizure.

When the wristband detects a seizure, it vibrates, and the wearer can respond. If the wearer becomes unconscious, which happens with the most dangerous seizures, and doesn’t respond quickly, the app sends an alert to a designated individual.

“If somebody goes to check on a person during or after they have had a grand mal seizure, then they are less likely to die,” Picard says. “In some cases, simply saying the person’s name or turning them over (gentle stimulation) might save their life. Anybody could do this potentially life-saving action, they just need to know to go check on the person — don’t leave them alone right after a seizure.”

Additionally, teachers and parents may want to monitor the stress levels of a child with emotion regulation issues or autism. The device may determine, for instance, if a child is experiencing a “fight-or-flight response,” and can be set to vibrate to alert parents or teachers. “You can see if the child lying on the floor or on the ground in the playground might be about to have a meltdown … even though they may look calm outwardly,” she says. “Several teens with autism told us they often can’t tell they’re about to explode until it’s too late. Maybe this could help some of them get an alert while they’re still in control.”

For epilepsy researchers, Picard says, the E4 wristband has made it possible to gather real-time data from patients going about their daily lives. Empatica’s website now lists around 20 academic papers that use E4 in studies on subjects ranging from autism to resuscitation after a heart attack.

In 2012, Picard and researchers published a paper in Neurology that correlated greater responses on the wrist with longer suppression of brain waves on the scalp. This meant certain regions of the brain were experiencing hyperactivity while the cortex, which is near the scalp, was shutting down — a phenomenon observed in all SUDEP cases. (This has now become an important biomarker for SUDEP.) Other results have identified a critical window when someone may stop breathing after having a seizure.

Importantly for research, Picard says, the device specifically detects stress signals from the sympathetic response of the autonomic nervous system, which is commonly associated with the fight-or-flight responses indicative of stress and seizures. “When we measure the skin response, we are seeing signals that originate deep in the brain, from regions so far under the scalp that a traditional EEG cannot pick them up,” Picard says.

In that way, the E4 is also valuable in studying other neurological conditions such as autism, anxiety, depression, phobias, and post-traumatic stress disorder (PTSD), Picard adds. “A PTSD researcher, for instance, may use the device to more accurately study why and how a patient may experience heightened flight-or-fight responses,” she says.

Staying in the medical space

Empatica’s core technology traces back to 2007, when Picard and researchers developed iCalm, a similar EDA-measuring wristband. In 2009, Picard and former postdoc Rana el Kaliouby co-founded Affectiva to commercialize the wearable device, then called the Q Sensor, to be used for measuring stress associated with autism.

Then one day when a student borrowed two wristbands to monitor the stress levels of his little brother with autism. He put one wristband on each wrist. When Picard checked the data remotely from her computer, she noticed “a whopper of a response on one side and nothing on the other,” she says. “It was such a big response, I didn’t believe it was real.”

Nothing she did in her lab could reproduce such a response. However, the student had kept a diary and, sure enough, on the exact date and time of the “whopper” response, the brother had had a seizure. As it turns out, minutes before someone has a seizure, the hair on one arm may stand on end.

But Affectiva soon changed course and began developing software that monitored and quantified people’s emotions for market research. So Picard founded another startup, Physiio, “to help the technology grow in the medical space,” Picard says. This caught the attention of a small, Italian, stress-tracking-wearable startup co-founded by Matteo Lai and Simone Tognetti. In 2014, the two companies merged to form Empatica, Inc., with Lai as CEO and Tognetti as chief technology officer.

Since then, Empatica has produced several iterations of the E4 for clinical use, with the most recent version released last year. But now the startup is “laser-focused” on bringing the Embrace to consumers, Picard says.

So does Picard — the consumer — use her own device? Yes, and she says the wristband has revealed interesting things about her own life. “The first time I wore this, I’m driving home and it’s going off, and I think, ‘I guess I’m letting myself get a little bent out of shape here,’” Picard says. “I’ve found it fabulous to learn about what’s going on with myself.”

Empatica, a startup co-founded by Prof. Rosalind Picard, is hoping to use the same data gathered by its wearable device Embrace, which “analyzes physiological signals to detect seizures,” to help people manage stress, reports Rina Raphael of Fast Company. “We’re developing the applications that can help people understand stress,” says Picard, “the technology is there.”

Empatica, a startup founded by Prof. Rosalind Picard, makes a wearable sensor that detects a person’s seizures, as well as certain physiological factors. Picard discussed the potential benefits of her work with Co.Design’s Katherine Schwab: “[W]hen you get personalized, long-term data from a watch or a phone, we can start to help an individual learn [their] patterns, not on average for some group you may be an outlier in.”

In an article for the Financial Times about new health care technologies, Sarah Murray highlights Prof. Rosalind Picard’s work developing wearable monitoring devices that could help people with conditions like epilepsy. “Wearables are going to be much bigger than anyone imagined,” says Picard.