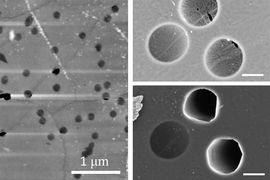 ↓ Download Image
Caption: On the left, an atomic-force microscopy image shows a nanoporous graphene membrane after a burst test at 100 bars. The image shows that failed micromembranes (the dark black areas) are aligned with wrinkles in the graphene. On the right, two zoomed-in scanning electron microscopy images of graphene membranes show the before (top) and after of a burst test at pressure difference of 30 bars. The images illustrate that membrane failure is associated with intrinsic defects along wrinkles.

Caption:
On the left, an atomic-force microscopy image shows a nanoporous graphene membrane after a burst test at 100 bars. The image shows that failed micromembranes (the dark black areas) are aligned with wrinkles in the graphene. On the right, two zoomed-in scanning electron microscopy images of graphene membranes show the before (top) and after of a burst test at pressure difference of 30 bars. The images illustrate that membrane failure is associated with intrinsic defects along wrinkles.

A single sheet of graphene, comprising an atom-thin lattice of carbon, may seem  rather fragile. But engineers at MIT have found that the ultrathin material is exceptionally sturdy, remaining intact under applied pressures of at least 100 bars. That’s equivalent to about 20 times the pressure produced by a typical kitchen faucet.

The key to withstanding such high pressures, the researchers found, is pairing graphene with a thin underlying support substrate that is pocked with tiny holes, or pores. The smaller the substrate’s pores, the more resilient the graphene is under high pressure.

Rohit Karnik, an associate professor in MIT’s Department of Mechanical Engineering, says the team’s results, reported today in the journal Nano Letters  serve as a guideline for designing tough, graphene-based membranes, particularly for applications such as desalination, in which filtration membranes must withstand high-pressure flows to efficiently remove salt from seawater.

“We’re showing here that graphene has the potential to push the boundaries of high-pressure membrane separations,” Karnik says. “If graphene-based membranes could be developed to do desalination at high pressure, then it opens up a lot of interesting possibilities for energy-efficient desalination at high salinities.”

Today’s existing membranes desalinate water via reverse osmosis, a process by which pressure is applied to one side of a membrane containing saltwater, to push pure water across the membrane while salt and other molecules are prevented from filtering through.

Many commercial membranes desalinate water under applied pressures of about 50 to 80 bars, above which they tend to get compacted or otherwise suffer in performance. If membranes were able to withstand higher pressures, of 100 bars or greater, they would enable more effective desalination of seawater by recovering more fresh water. High-pressure membranes might also be able to purify extremely salty water, such as the leftover brine from desalination that is typically too concentrated for membranes to push pure water through.

“It’s pretty clear that the stress on water sources is not going away any time soon, and desalination forms a major source of fresh water,” Karnik says. “Reverse osmosis is among the most efficient methods of desalination in terms of energy. If membranes could operate at higher pressures, this would allow higher water recovery at high energy efficiency.”

Turning the pressure up

Karnik and his colleagues set up experiments to see how far they could push graphene’s pressure tolerance. Previous simulations have predicted that graphene, placed on porous supports, can remain intact under high pressure. However, no direct experimental evidence has supported these predictions until now.

The researchers grew sheets of graphene using a technique called chemical vapor deposition, then placed single layers of graphene on thin sheets of porous polycarbonate. Each sheet was designed with pores of a particular size, ranging from 30 nanometers to 3 microns in diameter.

To gauge graphene’s sturdiness, the researchers concentrated on what they termed “micromembranes” — the areas of graphene that were suspended over the underlying substrate’s pores, similar to fine meshwire lying over Swiss cheese holes.

The team placed the graphene-polycarbonate membranes in the middle of a chamber, into the top half of which they pumped argon gas, using a pressure regulator to control the gas’ pressure and flow rate. The researchers also measured the gas flow rate in the bottom half of the chamber, reasoning that any increase in the bottom half’s flow rate would indicate that parts of the graphene membrane had failed, or “burst,” from the pressure created in the top half of the chamber.

They found that graphene, placed over pores that were 200 nanometers wide or smaller, withstood pressures of 100 bars — nearly twice that of pressures commonly encountered in desalination. As the size of the underlying pores decreased, the researchers observed an increase in the number of micromembranes that remained intact. Karnik says the this pore size is essential to determining graphene’s sturdiness.

“Graphene is like a suspension bridge, and the applied pressure is like people standing on that bridge,” Karnik explains. “If five people can stand on a short bridge, that weight, or pressure, is OK. But if the bridge, made with the same rope, is suspended over a larger distance, it experiences more stress, because a greater number of people are standing on it.”

“We show graphene can withstand high pressure,” says lead author Luda Wang. “The other part that remains to be shown on large scale is, can it desalinate?”

In other words, can graphene tolerate high pressures while selectively filtering out water from seawater? As a first step toward answering this question, the group fabricated nanoporous graphene to serve as a very simple graphene filter. The researchers used a technique they had previously developed to etch nanometer-sized pores in sheets of graphene. Then they exposed these sheets to increasing pressures.

In general, they found that wrinkles in the graphene had a lot to do with whether micromembranes burst or not, regardless of the pressure applied. Parts of the porous graphene that lay along wrinkles failed or burst, even at pressures as low as 30 bars, while those that were unwrinkled remained intact at pressures up to 100 bars. And again, the smaller the underlying substrate’s pores, the more likely micromembranes in the porous graphene were to survive, even in wrinkled regions.

“As a whole, this study tells us single-layer graphene has the potential of withstanding extremely high pressures, and that 100 bars is not the limit — it’s comfortable in a sense, as long as the pore sizes on which graphene sits are small enough,” Karnik says. “Our study provides guidelines on how to design graphene membranes and supports for different applications and ranges of pressures.”

Baoxa Mi, an assistant professor of civil and environmental engineering at the University of California at Berkeley, says graphene is widely recognized as one of the strongest materials in the world. Whether porous graphene can exhibit similar strength has been uncertain, until now.

“This [study] definitely reassures [graphene’s] potential applications in filtration, chemical/pharmaceutical separation, water purification and desalination,” says Mi, who was not involved in the research. “There are more challenges to overcome to really get there, such as creating small uniform pores on the graphene and being able to scale up. If successful, this technology will be a game changer in desalination.”

This research was supported, in part, by the MIT Energy Initiative and the U.S. Department of Energy.

Tiny pores in graphene could give rise to membranes