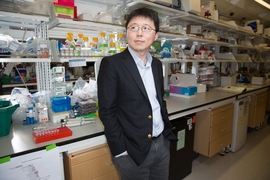 Feng Zhang, a member of the McGovern Institute for Brain Research and an associate professor in the Departments of Brain and Cognitive Sciences and of Biological Engineering, has been named a winner of the 2017 Albany Medical Center Prize in Medicine and Biomedical Research.

Zhang, who is the Poitras Professor in Neuroscience at MIT and a core member of the Broad Institute, is recognized for his contributions to the development of CRISPR-Cas9 as a gene editing technology, which in the words of the prize announcement “has revolutionized biomedical research and provided new hope for the treatment of genetic diseases and more.”

The $500,000 prize has been given annually since 2001 to those who have altered the course of medical research, and is one of the largest prizes in medicine and science in the United States. Past recipients include eight Nobel Laureates.

In announcing the award, the Dean of Albany Medical College, Vincent Verdile, said: “Rarely has such a recent discovery transformed an entire field of research, as CRISPR has in biological research. Its implications for biological processes, including human health and disease are promising and quite profound.”

Zhang will share the prize with four other CRISPR researchers: Emmanuelle Charpentier of the Max Planck Institute; Jennifer Doudna of University of California at Berkeley; Luciano Marraffini of Rockefeller University; and Francisco Mojica of the University of Alicante.

Prof. Feng Zhang has been honored as one of the recipients of this year’s Albany Medical Center Prize in Medicine and Biomedical Research for his work contributing to the development of the gene-editing tool CRISPR-Cas9, according to the AP. The AP notes that CRISPR-Cas9, “has sparked a boom in research over the past five years.”