“This work has allowed me to see most of the world” 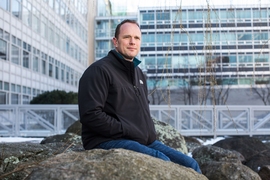 For Oliver Jagoutz, scaling the Himalayas with a pack of donkeys, hauling rocks by sled through the Alps, and making camp in one of the most rugged parts of Zimbabwe are all part of the job.

Jagoutz is a newly tenured associate professor of geology in MIT’s Department of Earth, Atmospheric and Planetary Sciences (EAPS). He aims to reconstruct the Earth’s tectonic history and gain insights into today’s shifting continents, through a combination of modeling, geological mapping, and analysis of rocks collected over months-long field expeditions. These journeys often take him to remote, mountainous, and even politically unstable parts of the world.

“The work I do, you better enjoy being out there, otherwise it’s miserable,” Jagoutz says. “You can be sitting out there, and it’s raining, and you’re cold, and you haven’t showered for three weeks. I don’t mind showering more often than three weeks, but I really like being out in the field. This work has allowed me to see most of the world.”

Jagoutz, who was born and raised in Mainz, Germany, a small town outside Frankfurt, says that his interest in rocks, and geology as a whole, “was pretty much given from birth.” His mother is a climate meteorologist who studies the effects of precipitation on soil content and uses this information to help farmers plan their fertilizer applications.

His father, who is now retired, was a cosmochemist who studied the composition of meteorites and volcanic rocks. He often took Jagoutz along on brief field excursions to examine rocks that were long ago erupted from deep within the Earth. After thousands of years of weathering, these mantle rocks appear unexceptional on their surface but their interiors are often full of green-colored minerals.

“I remember walking around with a bunch of kids and scientists in a volcanic field in Germany, and we hammered these rocks open and they were bright green, and we were all excited,” Jagoutz recalls. “The next day, I go to childcare, and I tell my friends, ‘If you take rocks and break them open, they all become shiny green inside!’ And then we started breaking all the rocks up, but none were green. I guess I was introduced to that kind of work early on.”

Jagoutz’ interest in rocks only grew from there, as he developed a passion for rock climbing. After graduating high school, he spent four years climbing in the Alps and worked briefly as a nurse in Mainz, thinking he might want to enroll in medical school.

Eventually, he decided to attend the University of Mainz but was undecided between two concentrations: geology and ethnopharmacy, the study of native populations and their medicinal use of local plants. He ultimately chose geology, and once enrolled in the program he instantly “loved it.”

Every weekend, the professors took their students out to examine and map the geological formations in the local Alpine regions. This work entailed chiseling out samples of rock to determine their composition and measuring the strata of rock layers on an exposed surface to estimate their relative ages and structure.

“You start to get an understanding of how the Earth built up, because all rocks have different ages,” Jagoutz says. “These maps are important for us to see the geological record and understand the large-scale picture.”

As a geology undergraduate, Jagoutz took part in three mapping expeditions and spent several weeks mapping rock formations in southern France and Greece before taking on his last assignment  — a six-week excursion to Zimbabwe, where he and another recently graduated student were to meet up with Jagoutz’ professor, who would guide them through the mapping exercise.

But plans went awry when the professor suffered a heart attack en route to Zimbabwe, leaving the students to figure out how and where to set up camp. They ended up hiring a local villager as a guide and cook. As it turns out, the man had no interest in cooking, so Jagoutz struck him a deal.

“I said, ‘If you don’t cook for us, at least tell us an African fairytale every night,’” Jagoutz recounts. “We were six weeks in the African bush, and he was telling us fairytales every night over a campfire. There were crocodiles in the river, snakes everywhere — it was great.”

After graduation, Jagoutz headed to the Swiss Federal Institute of Technology in Zurich to pursue a master’s degree in geology. His work focused on mapping the Glarus Thrust, a major fault in the Alps of eastern Switzerland that is famous for its ancient stone formations overlying much younger rock layers. These strata display the tectonic remains of Africa’s collision with Europe.

During this time, Jagoutz also traveled frequently to Pakistan, where he mapped a section of the Himalayas that is thought to have risen as the Indian continent crushed up against Asia millions of years ago. After earning his PhD, Jagoutz became a postdoc at the University of Bern in Switzerland and continued working in Pakistan.

“When you go into these remote areas, the people are very excited to see you,” Jagoutz says. “You work all day in the mountains and when they see you walking by, they put a blanket out for you and invite you in for tea. In these local populations, people were very nice.”

In 2008, Jagoutz accepted a junior faculty position with EAPS, where coincidentally, his father once worked as a postdoc in geology.

Each year, during Independent Activities Period, Jagoutz has led students on an MIT field camp to the western United States to map rock formations in high-altitude, rugged terrain. In 2013, he organized a 30-student trip to the western Himalayas.

His work in the Himalayas has led to several fundamental insights into ancient tectonic activity. Most notably, in 2015 Jagoutz and his colleagues presented a new explanation for India’s rapid collision with Asia, identifying two subducting, or sliding, continental plates as powerful forces that pulled India northward faster than normal.

Their field measurements also led to another key finding in 2016, when Jagoutz’ team reported that certain features in the Himalayas represent the remains of tectonic activity near the Earth’s equator, which closed off an ancient ocean basin and triggered global ice ages 80 million and 50 million years ago.

“If an entire ocean basin disappears on Earth, then the planet reacts,” Jagoutz says. “I think we did a good job of understanding what it does. It may have changed the climate to the extent that the ice age was initiated.”

Jagoutz is now working on a new project to understand the formation of the Red Sea, an inlet of the Indian Ocean that lies between Africa and Asia. The Red Sea is essentially a rift between the African and the Arabian tectonic plates, which will cause the Red Sea to expand as the plates continue to drift apart.

“If you rift continents, what happens to form an ocean?” Jagoutz says. “The Red Sea is the youngest rift we have on Earth; it’s really just starting. It’s fascinating geologically, and there are a lot of questions you can answer there.”

For some answers, Jagoutz hopes to enlist help from his EAPS colleagues, who often pop into his office, as he does into theirs, unannounced and driven by ideas.

“I love the creative chaos of MIT,” Jagoutz says. “Especially in our department — we don’t have anything like extraordinary equipment that puts us over others. I think the reason we are doing so well is the people. We have people here that really identify interesting questions and approach them. That makes all the difference.”