How Haiti helps us think differently about history 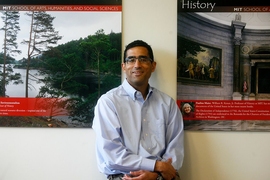 Back in the 18th century, Haiti was the most lucrative sugar-growing territory in the world, a key hub in the transatlantic economy, and, like the United States and France, the site of a democratic revolution. Battles over modern rights, slavery, and global commerce all figure prominently in Haiti’s history, though relatively few people know it.

To MIT historian Malick Ghachem, this is both an oversight and an opportunity. Ghachem, a Haiti expert, thinks we too often treat the country as a blank spot on the historical map. Then again, his teaching and writing help fill this void by connecting Haiti to the larger historical currents that have shaped our world.

“The fundamental responsibility of the historian is to uncover a story, put it in a new perspective, and show why it was important,” Ghachem says.

Indeed, Haiti, once a French colony called Saint-Domingue, became the first country with universal legal equality, after its slave rebellion. But its path toward this breakthrough was complex. As Ghachem chronicled in his first book, the French feared such a possibility for years and instituted a legal regime that sought to keep slavery intact by controlling manumission — the freeing of slaves by their owners — while only occasionally punishing planters for their brutality.

And there was both planter and slave unrest during the 1720s in Haiti, as Ghachem chronicles in a second book he is now completing. Back then the colony, like others in the Atlantic, was controlled by a monopoly trading company — in this case, the French Indies Company — and it was a white rebellion against the company’s slave-trading monopoly that helped produce Haiti’s large-scale sugar plantations. Studying Haiti as an integral part of this transatlantic world adds depth and nuance to our knowledge about democracy and globalization — for readers and MIT undergraduates alike.

“Our students want to learn something that’s going to make them think differently,” Ghachem says. “And Haiti is good for that. It’s an unfamiliar place to a lot of people, a place that doesn’t figure in the calculus of a lot of disciplines. If you want to think about economic history or international law or human rights and you bring Haiti into the picture, it disturbs the conversation and upsets the terms of the debate.”

Ghachem’s career has not followed the calculus of a lot of disciplines, either. He received his PhD in history from Stanford University at the same time he earned a law degree from Harvard University, and began a career in academia only after several years as a litigator. But today, when people act “as if the Haitian revolution did not exist,” Ghachem says, it reminds him why he is a historian: “We still have a long way to go. That’s why I think it’s important to be doing this work in the humanities.”

Reading from morning to night

Ghachem was born in Tulsa, Oklahoma, where his father was studying to be a petroleum engineer. The family moved to Chicago — Ghachem grew up a Cubs fan — and then to Saudi Arabia for several years, following a job opportunity for his father. Ghachem lived in Jeddah and attended an American school. When he wasn’t in the classroom, he played sports — “It’s always been a way that I’ve felt at home somewhere,” he says — and read. And read. And read some more.

“I really became very bookish and would just for days and days read books from morning to night,” Ghachem recalls. “I think that’s why I became an academic. My parents and siblings were dismayed by my reclusiveness. I’ve never read more in my life.”

Ghachem returned to the U.S. when he was of high school age, and started college at Georgetown University before transferring to Harvard. He got a BA in history, and in many of his classes realized that his professors were essentially “studying the history of revolution,” from France to Russia and beyond. The subject of revolution soon gripped Ghachem’s intellectual imagination — and it still does today, at MIT, where he helps teach 21H.001 (How to Stage a Revolution), a long-running history course.

“It forces you to think about a subject, a nation, from the ground up,” Ghachem says. “As [political philosopher] Hannah Arendt put it, what makes a revolution a revolution is that the participants in it are gripped by the sense they are doing something new under the sun. … They’re inventing something new, which is kind of the ethos of this place [MIT] right here. At a human level, that’s a very contagious feeling.”

“I started reading about the law of slavery, so that became my interest in law,” Ghachem says. “That was the link.”

Acquiring a history doctorate and a law degree is not a rare move for scholars, but pursuing the two degrees simultaneously on opposite coasts was a bit unusual. Eventually, in 2002, Ghachem emerged with his dual degrees — and promptly entered the legal profession. He clerked at the U.S. Court of Appeals for the Eleventh Circuit, in Miami, then became a lawyer in Boston, first at a small practice, then at a larger firm, Weil, Gotshal, and Manges LLP.

As a lawyer Ghachem worked on criminal defense cases, First Amendment issues, and U.S.-mandated travel restrictions, among other matters. But he still wanted to pursue his academic research, and he liked the idea of teaching.

“If you have cases like this, it’s very hard to leave,” Ghachem says. “They’re very engaging and you get very involved. But … at a certain point in time, I decided, if I’m not going to became an academic soon, I’m going to be in the law practice world forever. So I decided, let me try now.”

Ghachem had served as a lecturer for two years at MIT and in 2010 took a full-time faculty position at the University of Maine’s law school. In 2013, he joined the MIT faculty, where he was awarded tenure earlier this year.

Haiti and the global revolt

While Ghachem’s first book explores the long run-up to the Haitian revolution, the one he is now completing allows him to look more extensively at commerce and “the earlier part of the story,” as he puts it. Like other countries, debt-ridden France had given license to private companies to develop colonial holdings, and in the 1720s, this led to revolts in multiple places, including Louisiana, after some companies went bankrupt. (The South Seas Bubble is the best-known such implosion.)

“There is a global revolt against these companies that begins with financial crisis and spreads to other dimensions,” Ghachem says. “Saint-Domingue is I think the best example of this, but a little-known one.”

In a sense, the new work parallels Ghachem’s first book, but with a larger focus on the economic forces driving Haiti’s exploitation and unrest. Either way — in finance and economics, as in politics and law — Ghachem believes we can know the past better by not thinking of Haiti as an isolated territory, but putting it squarely in the mainstream of issues we still grapple with now.

The anthropology of humanitarianism