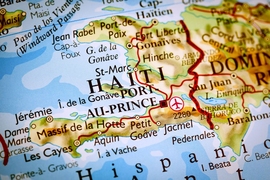 This month, Haiti’s government announced a new policy to educate students in Kreyòl, the native language of most Haitians, rather than French, the language traditionally used in schools. Introducing Kreyòl-language instruction has been a cause of Michel DeGraff, a professor of linguistics at MIT and a native of Haiti. MIT News recently discussed the policy shift with him.

Q. Why is it important to help Haitian students learn in Kreyòl?

A. Research has shown that we learn best in the languages we speak most fluently. In Haiti, at least 95 percent of the population is fluent in Kreyòl only. The use of any other language of instruction is a recipe for academic failure. This failure becomes a national tragedy when it repeats itself generation after generation, with Kreyòl-speaking children being taught in French.

According to research in cognitive science, becoming a good reader involves a “virtuous triangle” that seamlessly connects three sets of linguistic representations: letters on the page (“graphemes”), sounds in the corresponding language (“phonemes”), and word meanings (“semantics”). This triangle is most effective when all three — graphemes, phonemes, and semantics — pertain to the reader’s native language.

When Haitian children who speak only Kreyòl are taught to read in French (often by teachers who themselves are not fluent in French), the graphemes on the page relate to one language (French) while the phonemes and semantics in the child’s mind relate to another language (Kreyòl). So the triangle is “broken,” and the child, at best, will manage to parrot French sounds without adequate understanding of the text.

The matter is actually more complicated, because French words often sound somewhat like Kreyòl even when the corresponding meanings are substantially distinct. This “broken triangle” is the scientific explanation for one key factor underlying the massive failure of Haiti’s school system: Most Haitian children are never given the opportunity to become fluent readers. They never learn to read well, so they can’t read to learn.

Thanks to a National Science Foundation grant, the data that I have collected at the Lekòl Kominotè Matènwa (LKM), a school in La Gonave, Haiti, show that Haitian children who are taught in Kreyòl achieve much higher learning gains than their counterparts who learn in French. Once children have strong foundations in their native language, they are better equipped to learn all academic subjects, including second languages such as French.

Last year (2014), all 25 sixth-graders at LKM passed the official exam administered by the state (compared with an overall success rate of 71 percent). What’s less measurable, but also profoundly important, is the dignity of these Haitian children at LKM, whose joyful creativity is set free when they can learn in their native Kreyòl.

As for mathematics and science, the logical thinking that is necessary to succeed in these fields requires a great deal of reasoning and communication. The effective use of language is, thus, an essential ingredient there as well. In the NSF-funded MIT-Haiti Initiative, we’ve documented how teachers and students perform better when pedagogical resources, especially those for learning science and mathematics, are in Kreyòl.

Q. What are the specifics of this new agreement?

A. This is the first agreement between Haiti’s Ministry of National Education and Professional Training (MENFP) and the newly created Haitian Creole Academy (“Akademi Kreyòl Ayisyen,” or AKA), of which I am a founding member; AKA was inaugurated in December 2014. AKA’s mandate includes the establishment of conventions around the use of Kreyòl and the promotion of Kreyòl in all sectors of society.

The core objective of this new agreement between MENFP and AKA is to further promote Kreyòl, and Kreyòl speakers’ linguistic rights. MENFP and AKA have now created a formal framework to work together to expand the use of Kreyòl as a teaching tool at all levels of Haiti’s system, from kindergarten to university. This also entails the standardization of Kreyòl writing, and the training of teachers for instruction of, and in, Kreyòl.

I am both excited and anxious about the concrete steps to implement this agreement. In Haiti’s history we’ve had too many laws, decrees, and agreements that have never been implemented or whose implementation has been sabotaged from the get-go. Take, say, Article 5 of Haiti’s 1987 constitution, which made Kreyòl an official language alongside French and which recognized Kreyòl as the sole language that binds the Haitian people together. Also consider Article 40 of the same constitution, which requires the government to communicate information about all state matters in both Kreyòl and French. These articles of the constitution are violated on a daily basis by the government, which most often — and especially in writing — communicates in French only. The Akademi Kreyòl Ayisyen itself, which was decreed in the 1987 constitution, took 27 years to become reality.

However, MENFP Minister Nesmy Manigat has shown an extraordinary amount of political will to promote Kreyòl. He is wholeheartedly supporting AKA and its agenda, as shown in the signing, on July 8, of this MENFP-AKA agreement. As he explained at the signing ceremony, Haitian schools have for too long wasted the potential of too many students by ignoring their native Kreyòl, and he trusts that this agreement will help ensure that all Haitian students have the same opportunity to succeed in school.

As a member of the administrative council of AKA, I am helping set up a workshop series on the standardization of Kreyòl writing. We’ve had an official Kreyòl alphabet since 1979. But there are many loose threads remaining when it comes to establishing a standard writing system. Once these conventions are set in place — a major task that will necessarily take time — then we’ll start working on teacher-training workshops to spread the standardized writing system among teachers, students, and the general population.

Q. How does your understanding of Kreyòl as a linguist undercut some of the justifications offered in the past for French-language use and instruction?

A. One reason that has been offered to justify excluding Kreyòl from formal education is the claim that Kreyòl is a structurally lesser language that does not afford the same capacity as French to express complex concepts in science, mathematics, philosophy, and so on. One dogma in linguistics is that Creole languages are the world’s “simplest” languages because of their origins from “Pidgin” languages. Some linguists have even gone so far as to compare Creole languages to the earliest human languages spoken by Homo sapiens.

My linguistic research has argued against such claims, which I’ve given the umbrella term of “Creole exceptionalism.” I’ve shown in a series of research articles that such claims are empirically and theoretically untenable. The development paths and structures of Creole languages are on a par with their counterparts for languages such as English and French. My linguistics research shows that English and French, given their “hybridity” and structural distance from their respective ancestor languages (Proto-Germanic and Latin), could be considered more “Creole” than Haitian Kreyòl! Really, there is no linguistic reason why Creole languages should be excluded from the classroom — or from the family of “normal” human languages.

In addition, the MIT-Haiti Initiative has provided living proof that Kreyòl is perfectly usable as a language of instruction for advanced mathematics, physics, biology, and more. Better yet, the use of Kreyòl in the classroom improves the quality of teaching. We’ve been documenting such improvement with Haitian students and faculty who have participated in our NSF-funded work in Haiti since 2010.

So, indeed, the use of Kreyòl should be embraced as a powerful tool for development at all levels of Haiti’s education system and beyond, in every sector of Haitian society.

A champion of Creole