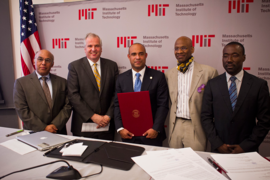 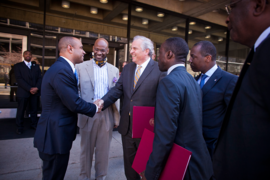 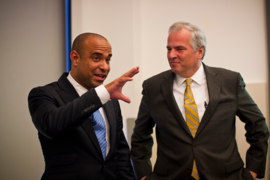 MIT and Haiti signed a new joint initiative today to promote Kreyòl-language education in the science, technology, engineering and math (STEM) disciplines, part of an effort to help Haitians learn in the language most of them speak at home.

“This government will make every effort to make this initiative a big success,” Haitian Prime Minister Laurent Lamothe said at the signing ceremony in MIT’s Vannevar Bush Room. “Haiti is moving forward.”

The project is taking MIT-developed and technologically based open education resources, translating those materials into Kreyòl, disseminating them in Haiti, and evaluating the materials’ effectiveness. The work is being done in conjunction with professors and educators from a variety of institutions in Haiti, including the State University of Haiti, Université Caraïbe, École Supérieure d’Infotronique d’Haïti, Université Quisqueya, NATCOM and the Foundation for Knowledge and Liberty.

“MIT folks are very collaborative,” MIT Provost Chris Kaiser said at the event. The initiative, he added, represented MIT’s “desire to do good in the world.”

The idea that more Haitian education should occur in Kreyòl is a longtime belief of MIT linguistics professor Michel DeGraff, a native of Haiti, who has contended that Kreyòl has been improperly marginalized in the Haitian classroom. DeGraff’s extensive research on public perceptions of Kreyòl, and on the language itself, has led him to assert that its perception as a kind of exceptionally simplified hybrid tongue, in comparison to English or French, unfairly diminishes the language.

The initiative is meant not to replace French, DeGraff added, but to help Kreyòl-speaking students “build a solid foundation in their own language.”

The technology-based open education resources, he noted, are meant to promote “active learning,” as opposed to drill-based rote learning techniques.

The initiative is being funded by the U.S. National Science Foundation and by MIT.

Alongside DeGraff, the project has been developed with the guidance of Vijay Kumar, a principal investigator of the MIT-Haiti Initiative for Kreyòl-based and technology-enhanced STEM education and director of the MIT Office of Educational Innovation and Technology, and Thomas Kochan, the George Maverick Bunker Professor of Management at the MIT Sloan School of Management and co-director of MIT's Initiatives in Haiti, coordinating such efforts across the Institute.

New educational resources are badly needed in Haiti, especially after the January 2010 earthquake that devastated the country, Lamothe noted. Rebuilding with Kreyòl-language educational tools will help provide “access to quality education for all,” given that 97 percent of Haitians speak Kreyòl. About 50 percent of Haitians have an income of less than $1 per day.

Lamothe added: “The most productive partnership for Haiti [is] about empowering Haitians to fly with their own wings.”

In a piece for The New York Times, Prof. Michel DeGraff and Molly Ruggles write of the need for Haitian students to learn in their native Creole, as opposed to French. “Creole holds the potential to democratize knowledge, and thus liberate the masses from extreme poverty,” DeGraff and Ruggles explain.

Professors Michel Degraff and Deborah Ancona speak with NECN about MIT’s initiative to support Haiti’s development of science, technology, engineering, and math curricula. Since 2010 the initiative has hosted four workshops and trained more than 100 teachers.