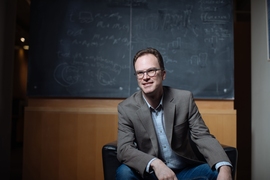 ↓ Download Image
Caption: Professor Jesse Thaler, who recently was granted tenure as an associate professor in MIT’s Department of Physics, is applying his theoretical insights to interpret data from current experiments and guide the design of future experiments.

Caption:
Professor Jesse Thaler, who recently was granted tenure as an associate professor in MIT’s Department of Physics, is applying his theoretical insights to interpret data from current experiments and guide the design of future experiments.

Jesse Thaler was a high school student in 1995, when a pivotal discovery in science turned his life’s path toward particle physics.

That year, physicists at the Fermi National Accelerator Laboratory confirmed that its Tevatron particle accelerator had detected, for the first time, a subatomic particle known as the top quark. This particle had been a missing piece in the Standard Model of particle physics — a theory that describes all the known elementary particles and several major, fundamental forces governing the universe.

“I remember my physics teacher had a big poster of the Standard Model on the wall, with a question mark next to the top quark,” says Thaler, who recently was granted tenure as an associate professor in MIT’s Department of Physics. “When it was discovered, I remember him writing down the mass of that top quark where there used to be a question mark. I thought discoveries must happen all the time. Little did I know that particle physics is a decades-long, even centuries-long, endeavor to try to understand the fundamental nature of matter, and that I would eventually become a part of that.”

Thaler, a member of MIT’s Center for Theoretical Physics and the Laboratory for Nuclear Science, is a self-described “pencil and paper, chalk and chalkboard” theorist, and works to derive theoretical insights to characterize the behavior of subatomic particles, and the fundamental forces that give structure to the universe.

He’s applying his theories to describe in greater detail the particles that are already known to the Standard Model, as well as predict the behavior of those beyond the Standard Model, which scientific theory cannot quite yet describe — namely, dark matter, which is thought to make up more than a quarter of the total mass-energy of the universe but has yet to be directly detected.

Thaler is collaborating with experimental physicists on projects ranging from small tabletop detectors to massive collaborations such as the Large Hadron Collider, and applying his theoretical insights to interpret data from current experiments and guide the design of future experiments.

“My research is always a balance between exploring what could, but might not, be there, and what must be there,” Thaler says. “Some would say everything should be beautiful and elegant and mathematical, and others would say the world is messy; you just have to study it. But at this boundary, it’s true some things are messy, and others are elegant, and living at that boundary is where I feel most comfortable.”

Thaler grew up in York, Maine, where his mother worked as a high school guidance counselor, and his father practiced family medicine. For high school, he attended Phillips Exeter Academy, where he quickly learned to think his way through tricky mathematical problems on his own.

“There wasn’t a textbook,” Thaler recalls. “You showed up the first day, they gave you a relatively thin stack of problems, and you went to class and had discussions but basically had to teach yourself. It was a very humanities-minded way of thinking of mathematics, which could also apply to physics.”

Thaler went on to Brown University, where he pursued a degree in math and physics, doing research into the formation of black holes, while also taking courses in the humanities, from Japanese theatre, to the role of women in Islamic society, to race relations in Brazilian history.

“Those classes helped me see that there is nuance, even in cases where you think things might be clear-cut,” Thaler says. “In physics, there are similar types of subtleties at play, where you can take different views on the same problem, and the answer comes from the full synthesis of those views. I try to take that approach in the physics research I do.”

To blow off some academic steam, Thaler picked up the electric bass as part of an eight-piece ’70s funk band, and put in late-night hours at the college radio station, playing jazz records under the pseudonym Lester, after legendary jazz saxophonist Lester Young.

From Brown, he went on to graduate school at Harvard University, with the intention of studying string theory, which at the time was thought to uniquely explain the synthesis of gravity and quantum mechanics, in one unifying theory.

“Now I know that to be not quite the right story,” Thaler says. “The modern view of string theory is not that there’s one theory of everything, but many different theories that come out of string theory, and it’s a challenge to figure out which one of those corresponds to our universe, if any. So there’s not inevitability built in.”

During his second-semester quantum field theory course, Thaler’s professor, who would become his thesis advisor, helped him redirect his focus toward another theory, not of everything, but of almost everything: the Standard Model of particle physics. It was in this class that Thaler began to see this model as something that could predict, with 100 percent certainty, that many things in the universe, such as the universal strength of gravity, would always be true. He also started to appreciate that there were limits to the Standard Model, and that there are some things about the universe, such as dark matter, that the theory so far has failed to describe in any organized, mathematical way.

“This represented a totally new, flexible way of thinking of quantum field theory where you really poked and prodded it from all angles and figured out where it really breaks down,” Thaler says. “So you have these twin realizations: that certain aspects of the Standard Model are fixed and inevitable, and certain aspects are not fixed and are therefore a source of confusion and a target for future research. Those twin aspects really inspired me.”

Thaler spent three and a half years in Berkeley, California, after graduating from Harvard, working as a postdoc at the Miller Institute for Basic Research in Science at the University of California at Berkeley, and at the Lawrence Berkeley National Laboratory, which was just up the hill from the university. At the time, he was wrestling with whether to concentrate on the dynamics of behaviors that are known in the Standard Model, or explore phenemona beyond the Standard Model.

He was able to get a taste of both sides at Berkeley. On campus, he found that researchers tended to theorize about the more speculative, uncertain parts of the Standard Model, while researchers at the laboratory were looking in detail at more fixed phenomena.

“I would spend half my time on campus and half at the lab, and got the synthesis of the two, taking the shuttle bus up and down the hill,” Thaler says. “And sometimes the most exciting things are at the intersection of those two perspectives.”

In 2009, he applied for a faculty position at MIT and while interviewing got to talking with physics professor Richard Milner about ways to test for the existence of dark matter. From that conversation, Thaler proposed an experimental design, which has since evolved to become DarkLight, an MIT-led experiment that aims to look for “dark forces,” or interactions that are thought influence dark matter.

In January 2010, Thaler moved, “in the dead of winter,” as he recalls, from Berkeley to Cambridge, as an assistant professor in MIT’s Department of Physics. He expected a steep curve in learning how to juggle the various teaching and research responsibilities that come with being a professor. What he didn’t anticipate was how difficult it would be for him to hand over some of those responsibilities, particularly in research, to his students.

“Learning to let go and trust my students was eye-opening,” Thaler says. “The students at MIT are fantastically brilliant, and oftentimes I would have the wrong idea of how something should work. But my students have wonderfully stuck to their guns, even if I was skeptical of their results, and convinced me that they were right.”

At MIT, Thaler’s research has made a major impact on several areas of physics, most notably on understanding the structure and behavior of jets produced from the collision of protons at high energies. Protons are made from accumulations of subatomic particles called quarks and gluons, which are held together by a glue-like interaction called the strong force. When protons collide at significant speeds, they release sprays or jets of quarks and gluons, which can rebind into collections of subatomic particles such as pions and kaons.

Thaler has developed theoretical techniques to study the strong force and the structure of these jets in detail. His techniques are now being applied at the Large Hadron Collider — the largest, most powerful particle accelerator in the world, based in Geneva, Switzerland — to look for interesting physics, and even signs of dark matter.

“Studying these jets is a messy business,” Thaler says. “They look like they’re just chaos. But if you work your way up to the boundary of theoretical insights, you realize within that messiness, there’s structure, and you can exploit that structure to figure out what’s going on. We haven’t yet discovered dark matter in this way, but we have been able to search for it in more exquisite detail than in the past.”

Looking to the future, Thaler is eager to explore more uncharted territories beyond the Standard Model, and is working on theoretical designs for other experiments to detect dark matter.

“I have a responsibility to push on whatever I think I can make an impact on, and push it forward,” Thaler says. “For that, I can’t think of a better place to be than MIT, for the next however many decades.”