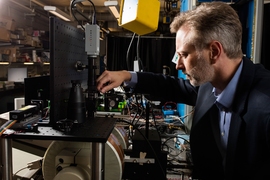 ↓ Download Image
Caption: “There are many thousands of combinations of materials and interfaces that we can create,” says associate professor Geoffrey Beach. “So with this wealth of material structures, rather than relying on the few materials that nature has given us, we can now design materials and their magnetic properties to exhibit the characteristics that we want.” 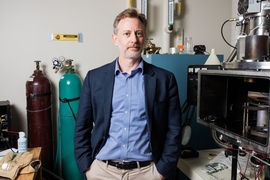 ↓ Download Image
Caption: “There are many thousands of combinations of materials and interfaces that we can create,” says associate professor Geoffrey Beach. “So with this wealth of material structures, rather than relying on the few materials that nature has given us, we can now design materials and their magnetic properties to exhibit the characteristics that we want.”

Caption:
“There are many thousands of combinations of materials and interfaces that we can create,” says associate professor Geoffrey Beach. “So with this wealth of material structures, rather than relying on the few materials that nature has given us, we can now design materials and their magnetic properties to exhibit the characteristics that we want.”

Geoffrey Beach has been tinkering and building things most of his life, including some 50 model rockets that he built and launched while in high school in Oklahoma. But it wasn’t until his undergraduate studies in physics that he zeroed in on the topic that has dominated his research ever since: the study of magnetism and how to control it.

In his work, Beach combines the deep, theoretical understanding of a physicist with an engineer’s passion for building and refining the devices needed to carry out his investigations.

“In high school and college, I was always interested in physics,” says Beach, who is an associate professor in MIT’s Department of Materials Science and Engineering, where he earned tenure in 2015. He received his bachelor’s degree from Caltech, where his interest in magnetism first came into focus.

During those college years studying physics, “everyone there wanted to work on gravity,” he says. “I liked the theoretical aspect, but I’ve always been a very hands-on person. I always liked to build things, and I really like to see how things work.”

Beach had an extra incentive to pursue his chosen field of physics: His father, a paper-industry executive, put Beach to work at a paper mill during his summer vacations, and chose for his son the hardest and dirtiest jobs to ensure he wasn’t getting any special treatment. “So I ended spending the summer up on the roof, cleaning out air-conditioning units in 100-degree heat,” Beach recalls.

Looking for a more career-building alternative, he sent out “a lot of requests” to many faculty members, seeking a summer job. One of those requests struck paydirt — and opened up a whole new avenue of study for Beach. “There was a professor working on condensed matter and magnetic materials, who responded,” he says. She set him up in a lab that gave him his introduction to the study of exotic magnetic processes.

Beach learned a variety of lab techniques and how to use specialized equipment, and then proceeded to figure out how to modify the equipment and develop new methods. “I realized that doing these things, I really could get my hands into every aspect” of the research, trying to unravel the properties of various newly developed materials, he says. “I loved it. I had found what I enjoyed doing.”

Beach went to the University of California at San Diego for his doctorate, working in the industry-sponsored Center for Magnetic Recording Research, which covered all aspects of digital data storage, from the magnetic materials themselves to the signal-processing technology needed to process the data. “I was very intrigued by the magnetism problems,” he says, “but also by the utility of what I would do there, to address a real, pressing problem,” since magnetic recording is such a fundamental part of everything from computers to entertainment systems.

One of the key insights he gained from that work was the crucial role of boundaries between materials. “Interfaces control everything,” he says. “If you want to control and design material properties, you don’t start with the bulk material, you put dissimilar materials adjacent to one another.” Such interfaces that don’t occur naturally are “the interesting places where things can happen.”

While at UCSD, he worked on developing novel thin-film magnetic nanocomposites, with interfaces between metals and oxides, which turned out to have exceptionally fast response times for data recording.

He met his wife Kanna Shimizu as an undergraduate, and they got married while they were in graduate school. After they both earned their PhDs, she found a job with IBM in Austin, Texas, and he looked for a position in the area. He quickly found a postdoc opening at the University of Texas that fit his interests, working on thin-film magnetism.

He and Shimizu “finally got to live together, for the first time since we got married,” he says, after having spent their graduate school years commuting to be together on weekends. (She had been at Stanford University, about 470 miles away from San Diego). While in Texas, they had their first child, Emma. Alyssa, their second daughter, was born the day before Beach had his first interview at MIT. Shimizu is now an engineer working at Amazon.

It was at UT Austin that Beach began in earnest his investigation of how fast the poles of a magnetic material can be reversed — a key objective for enabling next-generation data systems for computers whose processing speeds continue to increase at a rapid pace. “That’s where I started to get into magnetization dynamics: How do materials respond to stimuli? How fast can magnetic materials respond?” he says. These dynamic effects turned out to work very differently as materials get down to nanoscale (billionths of a meter) sizes, Beach found.

While in Texas, he studied new materials whose magnetic properties could be altered electrically — a field now known as spintronics. Until that time, “In all of history, if you wanted to control a magnetic material, you needed another magnet,” he says, but these new materials could be changed by just applying a voltage. “Once you can do things electrically, you can wire these things together into a circuit, and you can start to manipulate information this way without anything physically moving, and without using magnets.”

That’s a big advantage, because it’s very hard to make very small, useful magnets; the magnetic field disperses around them. At the time, “these ideas of using electron properties in a material to control magnetism were just coming into fruition,” he says.

His experiments with tiny wires, just a few nanometers in diameter, showed that when the wire was composed of two oppositely magnetized segments joined together, interesting things could happen at the boundary where the two segments meet. That boundary could be pushed and pulled one way or the other by passing current through the wire — changes that could be used to encode data.

What’s more, he found that wires could be made with many segments in a row, and all the boundaries could be controlled in this way, so this could provide a way of encoding a number of data bits in a single, minuscule wire. But there were limitations: The system required too much current to be practical.

When Beach was hired for a faculty position at MIT in 2008, these kind of moving magnetic domains quickly became a major focus of his research. “The crux of my research now is to design more complex materials in which we can go around what seemed to be fundamental simple principles, by using the complexity of materials, and properties that emerge at designed interfaces, to really use materials science to overcome these limits and really explore new physics in materials,” he says.

For example, Beach and his co-workers have found that a kind of magnetic virtual particle can be created in these designed interfaces, and can be used to store and retrieve data at rates that are already comparable to those of conventional systems, but whose variants may have the potential to be much faster.

“There are many thousands of combinations of materials and interfaces that we can create,” he says. “So with this wealth of material structures, rather than relying on the few materials that nature has given us, we can now design materials and their magnetic properties to exhibit the characteristics that we want.”

That’s just one of many projects that Beach and his students continue to work on, in which creating and manipulating the interfaces between “simple, boring” materials can produce properties that are exciting, novel, and potentially useful for a wide variety of applications. “The possibilities are more or less endless, as far as we’re concerned,” he says.

Oscillating microscopic beads could be key to biolab on a chip