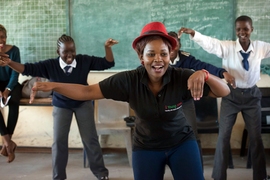 ↓ Download Image
Caption: The non-profit Young 1ove designed a course for Botswana schools called “No Sugar” that teaches young girls the high likelihood of contracting HIV from older men called "sugar daddies." Classes begin with ice breakers, such as singing and dancing exercises (shown here). The remainder of the class teaches students risk factors associated with sugar daddies and how to seek help. The course has reached more than 35,000 students in more than 350 schools. 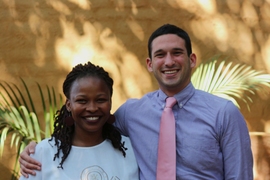 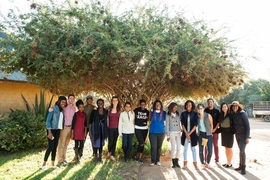 ↓ Download Image
Caption: MIT graduate Noam Angrist ’13, second from left, started the non-profit Young 1ove in Botswana to “connect youth to proven life-saving information by taking evidence off the shelf and scaling it up in health and education.”

Caption:
The non-profit Young 1ove designed a course for Botswana schools called “No Sugar” that teaches young girls the high likelihood of contracting HIV from older men called "sugar daddies." Classes begin with ice breakers, such as singing and dancing exercises (shown here). The remainder of the class teaches students risk factors associated with sugar daddies and how to seek help. The course has reached more than 35,000 students in more than 350 schools.
Credits:
Courtesy of Young 1ove

Caption:
MIT graduate Noam Angrist ’13, second from left, started the non-profit Young 1ove in Botswana to “connect youth to proven life-saving information by taking evidence off the shelf and scaling it up in health and education.”
Credits:
Courtesy of Young 1ove

After graduating from MIT, Noam Angrist ’13 was conducting economics research at the University of Botswana on a Fulbright Scholarship, where he witnessed firsthand a widespread problem.

The university provides its students monthly stipends. When funds run low at the end of each month, groups of “sugar daddies” — older men who offer girls gifts and money in exchange for sexual relationships — linger near the university to attract female students.

“This phenomenon [happens] every month like clockwork,” Angrist says. “Guys in fancy cars waiting and younger girls getting their high heels on and walking to the edge of university.”

In a country with the third-highest HIV prevalence among adults worldwide, at 24 percent, it’s estimated that more than 40 percent of sugar daddies have HIV. And for each year older a male partner is than the female, the risk of unprotected sex increases 28 percent. Yet these risks were virtually unknown among Botswanan girls.

In his MIT days, Angrist, whose studies focused on analyzing the efficacy of global education programs, had read a study by the Abdul Latif Jameel Poverty Action Lab (J-PAL) about sugar-daddy-risk education in Africa. The study estimated that a 40-minute course about the risks of sugar daddies, presented at more than 70 schools in Kenya, had reduced teen pregnancy by 28 percent over two years. But that course hadn’t been implemented beyond the trial.

Compelled by that research, and using the course as a template, Angrist and his co-founders designed a course for Botswana schools called “No Sugar” that teaches girls about the high likelihood of contracting HIV from these older men.

So far, the course, developed and delivered by Angrist’s nonprofit, Young 1ove, has reached more than 35,000 students in more than 350 schools across the country. Results of the initial study in Kenya were promising, so Young 1ove recently ran a randomized trial of its own course in Botswana, measuring its impact on pregnancy reduction. Because results were mixed, the organization is using that data to further refine the course, with aims of testing it again — this time for its direct impact on HIV reduction — before scaling up.

“The mission is to connect youth to proven life-saving information by taking evidence off the shelf and scaling it up in health and education,” Angrist says.

No Sugar classes begin with ice breakers, such as singing and dancing exercises. The instructor, a local young woman, then presents pictures of men, aged early 20s to late 40s. Students are asked who they think is most likely to have HIV, “which is the crux of the intervention [because] about 90 percent of the students get this wrong,” Angrist says.

Generally, the students see older men as less risky, because they appear mature or financially secure, or are married or have sex less often. The instructor then reveals a graph showing that 43 percent of men over 40 in Botswana carry HIV, while the infection rate for men in their teens and early 20s stands at 4 to 5 percent. “There are often gasps in the room, because it’s so startling,” Angrist says.

After, a 15-minute animated video produced by UNICEF is shown that depicts the struggles of a young girl who is approached by a sugar daddy, and there’s a discussion about how to avoid older men and where to get help.

A key notion behind the course — and the J-PAL study it’s based on — is showing the true costs of engaging in sexual relationships with older men, Angrist says. Students initially believe relationships with older men offer benefits with little to no downside. Once it’s revealed they carry a high HIV risk, however, “we raise the cost of dating older guys dramatically,” Angrist says.

Another important feature is the course’s youth-to-youth model, which the organization established early on. Initially, Angrist or his co-founder, Moitshepi Matsheng, a University of Botswana graduate, and training manager Thato Letsomo ran the course. But bringing in local young adults as teachers immediately made the students feel more comfortable and involved. “It wasn’t enough to teach the content. We realized we needed a young, female Botswana woman who was a role model to come in and empower the young women,” Angrist says.

Until now, Angrist says, most schools in Botswana taught an abstinence-only curriculum. But the government is now pushing for more comprehensive programs that teach students to practice safe sex and with people their own age. Young 1ove receives approval of the nation’s government before it brings its course to any school. “We know over half of adolescence in Botswana will have sex,” Angrist says. “In that context, a safer option is saying, ‘It’s much safer with guys your own age.’”

Recently, Young 1ove analyzed the results of a randomized trial across its 360 schools that revealed the course’s efficacy and other valuable insights.

One component of the trial measured drops in teen pregnancy as a proxy for HIV, as both are risks of unprotected sex. The organization tracked students for a year after taking the No Sugar course to see if they had dropped out of school because of pregnancy. Those numbers were then compared with past teen pregnancy rates. In schools where the course was taught, the main measure of pregnancy dropped 30 to 40 percent. While promising, other measures indicated this effect might have been short-lived, perhaps providing only a three-month delay in pregnancy.

Surveys and other methods revealed further insights. One is that sugar daddies are, in Botswana, much younger than the Young 1ove team initially thought. In Botswana, sugar daddies were not just in their 40s, but the youngest were in their mid-20s. Now the course teaches that every older man is riskier for HIV.

Another insight was that girls are, in fact, far more frightened of becoming pregnant than contracting HIV. Pregnancy is more visible and stigmatized, and there is no legal abortion in Botswana, unless it will save the mother’s life. Now the course highlights the risks of both HIV and pregnancy that accompany sex with sugar daddies.

Ultimately, Angrist says, the course is proving it can help change sexual behaviors. But the efficacy for preventing HIV isn’t yet crystal clear, so the organization is now conducting a new trial study to directly measure the impact the course has on HIV reduction.

“We put the stake in the ground here, saying it’s promising, but needs to be rigorously researched in the context of Botswana, and we need to measure HIV directly before we decide to scale up,” Angrist says.

Once that trial is completed over the next couple of years, and if it shows positive impact, the organization hopes to scale the course to reach 1 million students, expanding beyond Botswana into Zambia, Zimbabwe, and South Africa.

With its No Sugar course showing promising early results, Young 1ove is also hoping to adapt other successful educational programs for Botswana schools. The organization is currently piloting a program, called Teach at the Right Level, pioneered by a large nonprofit organization in India. The concept is to teach children at grade level they’re at, instead of the one they’re assigned. This means, if students struggle in a grade, Young 1ove pulls them out, tutors them privately for several weeks, and brings them back into the class, where they can catch up.