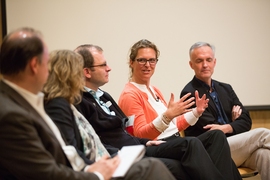 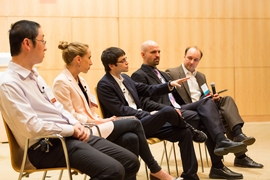 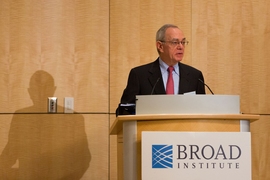 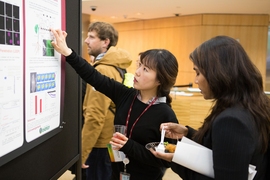 ↓ Download Image
Caption: Conference participants discussed research presented in a poster session, during a break in the daylong SENSE.nano conference, which marked the launch of a new “center of excellence” for MIT research.
Credits: Photo: Michael D. Spencer

Caption:
Conference participants discussed research presented in a poster session, during a break in the daylong SENSE.nano conference, which marked the launch of a new “center of excellence” for MIT research.

In anticipation of the official opening of the new MIT.nano building — which will house some of the world’s leading facilities supporting research in nanoscience and nanotechnology — MIT last week officially launched a new “center of excellence” called SENSE.nano, which is dedicated to pushing the frontiers of research in sensing technologies.

Like the new building, which is slated to open a year from now, SENSE.nano is an endeavor that cuts across the divisions of departments, labs, and schools, to encompass research in areas including chemistry, physics, materials science, electronics, computer science, biology, mechanical engineering, and more. Faculty members from many of these areas spoke about their research during a daylong conference on May 25 that marked the official launch of the new center.

Introducing the event, MIT President L. Rafael Reif said that “[MIT.nano] will create opportunities for research and collaboration for more than half our current faculty, and 67 percent of those recently tenured. In fact, we expect that it will serve — and serve to inspire – more than 2,000 people across our campus, from all five MIT schools, and many more from beyond our walls.”

Explaining the impetus for creating this new center, Reif said that MIT is “famous for making — because we have a community of makers — a concentration of brilliant people who are excited to share their experience and their ideas, to teach you to use their tools and to learn what you know, too. On a much bigger scale, this is the same magic we hope for in creating SENSE.nano. As MIT.nano’s first ‘center of excellence,’ SENSE.nano will bring together a wide array of researchers, inventors, and entrepreneurs fascinated by the potential of sensors and sensing systems to transform our world.”

The development of new kinds of connected, inexpensive, and widespread sensing devices, harnessing the power of nanoscale imaging and manufacturing systems, could impact many of the world’s most pressing problems, said Vincent Roche, president of Analog Devices, who gave the opening keynote talk. Such new technology “has the potential to solve problems that have plagued humanity for millennia, including food and water security, health care, and environmental degradation.”

The 200,000-square-foot facility, in addition to more than doubling the amount of clean-room imaging and fabrication space available to MIT researchers, also contains “one of the quietest spaces on the eastern seaboard,” said Brian Anthony, co-leader of the new center of excellence and a principal researcher in the mechanical engineering department, referring to an exceptionally vibration-free environment created on the new building’s basement level, where the most sensitive of instruments, that require a perfectly stable base, will be housed.

To show by example what some of that cross-disciplinary work will look like, several faculty members described the research they are doing now and explained how its scope and capabilities will be greatly enhanced by the new imaging and fabrication tools that will become available when MIT.nano officially opens for research.

Tim Swager, the John D. MacArthur Professor of Chemistry, described ongoing work that he and his students have been doing on developing tiny, low-cost sensors that can be incorporated in the packaging of fruits and vegetables. The sensors could detect the buildup of gases that could lead to premature ripening or rotting, as a way to reduce the amount of food wasted during transportation and storage. Polina Anikeeva, the Class of 1942 Career Development Associate Professor in Materials Science and Engineering, talked about developing flexible, stretchable fibers for implantation in brain and spinal cord tissues, which could ultimately lead to ways of restoring motion to those with spinal cord injuries.

Others described large-area sensing systems that could incorporate computation and logic so that only the most relevant data would need to be transmitted, helping to curb a data overload; and sensors built from nanotubes that could be bent, twisted, or stretched while still gathering data. Still others described ways of integrating electronics with photonic devices, which use light instead of electrons to carry and manipulate data. Also presented was work on using fluorescing quantum-dot particles to provide imaging of living tissues without the need for incisions, and building sensors that can continuously monitor buildings, bridges, and other structures to detect signs of likely failure long before disaster strikes.

“The future will be measured in nanometers,” said MIT Professor Vladimir Bulovic, in a panel discussion at the end of the conference, moderated by Tom Ashbrook, host of NPR’s “On Point.” Bulovic, who is the faculty lead for the MIT.nano building and the Fariborz Maseeh Chair in Emerging Technology, added, “We are right now at the renaissance age of nano.” He noted that devices all around us — and in our pockets — are constantly sensing, recording, and sometimes transmitting data about our surroundings.

“We can access data on how the world around us really functions, and with that data, we can take the next step of influencing the environment” to improve our health, protect our natural environment, and monitor our buildings, structures, and devices to make sure they are working as they should, he said. “The opportunity is vast.”

In his introduction, Reif also hailed the potential of what’s sometimes called “ubiquitous sensing”: “Tomorrow’s optical, mechanical, electrical, chemical, and biological sensors, alone and networked together, offer a huge range of new possibilities in terms of understanding and controlling the world around us. Sensors will change how we protect our soldiers and keep our bridges safe. How we monitor the polar ice caps, and monitor how children learn. Sensors will change how we keep our water clean, our patients healthy, and our energy supply secure. … In short, sensors and sensing systems will be the source of new products, new capabilities — and whole new industries. And we should not be surprised if some of them are deeply disruptive.”

Disruption, of course, can be a two-edged sword. So, Reif said, one of the challenges facing those who innovate in this field, “as technology races to the future, is how to help society navigate its unintended impacts. … If we can make this a first concern, and not an afterthought, I have no doubt that this community will continue to be a major force in making a better world.”

Welcome to the nano age