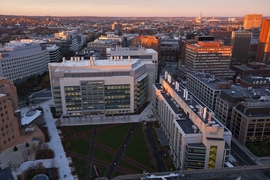 ↓ Download Image
Caption: Since 2014, total campus emissions have dropped by 7 percent. Ninety-seven percent of the Institute’s emissions are associated with the operation of labs, offices, residences, and other building facilities across campus. 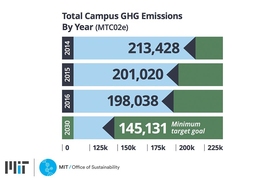 ↓ Download Image
Caption: MIT set a goal to reduce campus emissions by at least 32 percent by 2030 with a plan toward achieving carbon neutrality as soon as possible. 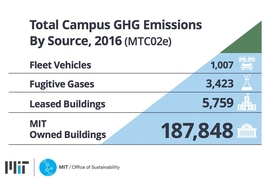 ↓ Download Image
Caption: The largest source of campus emissions is the energy used to heat, cool, and power buildings, followed by fugitive gases and fleet vehicles.

Caption:
Since 2014, total campus emissions have dropped by 7 percent. Ninety-seven percent of the Institute’s emissions are associated with the operation of labs, offices, residences, and other building facilities across campus.
Credits:
Photo: MIT Image Library

Caption:
MIT set a goal to reduce campus emissions by at least 32 percent by 2030 with a plan toward achieving carbon neutrality as soon as possible.

Caption:
The largest source of campus emissions is the energy used to heat, cool, and power buildings, followed by fugitive gases and fleet vehicles.

MIT’s total campus emissions have dropped by 7 percent since 2014, according to MIT’s second annual greenhouse gas inventory. The inventory, whose results were released by the MIT Office of Sustainability in collaboration with the Department of Facilities and the Environment, Health and Safety Office, measured campus emissions in fiscal year 2016, which runs from July 2015 through June 2016. The analysis provides a wealth of data to inform MIT’s carbon-reduction strategies going forward.

“Step by step, we are making encouraging progress across the Institute,” says Don Holmes, director of maintenance and utilities in MIT’s Department of Facilities. “Teams from across the departments are employing creative energy-saving strategies that help optimize building performance, including upgrades to systems and lighting, improved insulation, and higher-efficiency materials and equipment. We are also investing in an upgrade to our power plant that will achieve additional emissions reductions.”

One year ago, when President L. Rafael Reif announced MIT’s five-year Plan for Action on Climate Change, the Institute committed to being a leader in solving the complex, global challenge of climate change. The announcement galvanized the already-engaged MIT community to take direct action to meet the plan’s goals.

One such goal is to use the campus as a “test bed” for climate action, and develop solutions to reduce campus emissions by at least 32 percent by 2030 with a plan toward achieving carbon neutrality as soon as possible. The inventory is being used to inform MIT’s carbon reduction plans and as a tool for campus learning and engagement.

“The greenhouse gas inventory is an indispensable tool for tracking and managing our efforts to reduce MIT’s campus carbon emissions. Just as importantly, by making the data publicly available, the inventory serves as a critical tool for engaging more members of the MIT community in reducing consumption and achieving our campus carbon emissions goals,” says Vice President for Research Maria Zuber.

With the underlying energy and greenhouse gas (GHG) data publicly available, staff, students, and faculty can use the inventory to support the Institute’s efforts to identify ways to reduce MIT’s emissions, understand related energy and emission trends, and refine data collection methods.

A greenhouse gas inventory assesses the quantity of greenhouse gases the Institute produces, and identifies the emissions’ sources. The team used the Campus Carbon Calculator — the most commonly used inventory tool for universities — to convert data from the MIT campus into a single unit: metric tons of carbon dioxide equivalent (MTCO2e). For this inventory, MIT measured its campus greenhouse gas (GHG) emissions associated with burning fossil fuels, and the emissions of noncombusted GHGs used in research, refrigeration, and electrical insulation. The MIT Office of Treasury and Planning then audited the findings for accuracy.

The 2016 inventory builds on the findings of the first inventory, released in January 2016, which reported campus emissions from 2014 and 2015 and established the 2014 emissions as a baseline for tracking changes. In 2016, MIT continued to measure its greenhouse gas emissions from three areas (as it did in 2014 and 2015): building energy use for Cambridge-based academic purposes, fugitive gases, and campus-owned vehicles.

“The data from our latest GHG inventory affirm that the strategies we have put in place are beginning to show results,” says Office of Sustainability Project Manager Steven Lanou, who managed the development of the inventory.

As in previous inventories, the largest source of campus emissions is the energy used to heat, cool, and power buildings. Ninety-seven percent of the Institute’s emissions are associated with the operation of labs, offices, residences, and other building facilities across campus. MIT leases approximately 515,000 gross square feet to accommodate departments in Cambridge, which account for 3 percent of these building-related emissions.

The inventory revealed that fugitive emissions, GHGs that are emitted on campus through noncombustion processes used in research, refrigeration, and electrical insulation, account for 2 percent of campus emissions.

Finally, campus-owned vehicles, MIT’s fleet of over 160 shuttles and departmental vehicles, account for 1 percent of emissions through their fuel combustion.

Between 2014 and 2016, the campus achieved a 7 percent reduction in overall emissions, from 213,428 MTCO2e in 2014 to 198,038 MTCO2e in 2016. The majority of the change came from the reduction of emissions in MIT-owned buildings, followed by reductions in fugitive gases, and fleet vehicle emissions. While there was an overall increase in leased space in 2016, increased emissions associated with leased space are primarily the result of better data tracking and collection practices.

Changes in emissions are expected to fluctuate year-to-year. For example, between 2014 and 2015, MIT recognized a 5.8 percent net reduction in emissions, while between 2015 and 2016 a net reduction of 1.4 percent was realized. Changes in space use, operations at MIT’s central utility plant, and weather can all influence emissions.

MIT achieved this reduction in its GHG emissions from 2014 through several strategies, including investing in energy efficiency and use of cleaner fuels, while also benefiting from relative improvements in grid-purchased electricity. Successful energy efficiency strategies included investments in new construction and renovation, upgrades in space lighting, building retro- and monitoring based-commissioning to optimize building performance, mechanical system upgrades, and utility distribution system insulation. Since FY2014, it is estimated that MIT’s investments in building energy efficiency lowered MIT’s annual total emissions by 8,400 metric tons of greenhouse gases — an amount equal to over half of the measured reductions.

While the 2016 GHG inventory shows encouraging results, there is still significant work to be done in achieving the Climate Action Plan goal of at least a 32 percent reduction in emissions. Shaped by past experience and new knowledge, MIT is already looking ahead to reduce its climate impact through several strategies.

MIT will look to reduce the emission of fugitive gases through chemical substitution, enhanced material capture and reuse, and possible process redesign in its laboratories. For its campus vehicle fleet, MIT seeks to expand of the use of alternative fuels, optimize vehicle sizes for required duty, and improve transit routing and scheduling. As for the buildings MIT leases in Cambridge, emissions reduction strategies will require partnerships with leasing companies to advance energy efficiency and renewable energy sources in non-MIT owned properties.

Looking forward, MIT recognizes that investing in renewable energy by deploying additional renewable energy systems on campus and enabling off-site renewable energy production is a key component of the plan. In October 2016, MIT committed to partnering and investing in the development of the Summit Farms Solar Project in North Carolina, a 60 megawatt solar photovoltaic farm. When this project is completed in 2017, MIT will purchase solar energy equivalent to 40 percent of its current electricity use, which will neutralize emissions by 17 percent. This alliance with Boston Medical Center and Friends of Post Office Square is an additional demonstration that MIT is prepared to take large-scale action on climate change.

Cogeneration: A bridge to the future