Blood testing via sound waves may replace some tissue biopsies 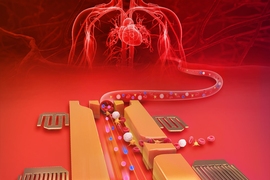 ↓ Download Image
Caption: This schematic shows a microfluidic device that uses sound waves to separate exosomes (pink spheres) from other components of blood. 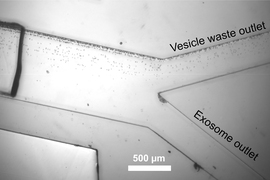 ↓ Download Image
Caption: Exosomes are separated from other vesicles as they flow through a microfluidic channel, guided by sound waves.

Caption:
This schematic shows a microfluidic device that uses sound waves to separate exosomes (pink spheres) from other components of blood.

Caption:
Exosomes are separated from other vesicles as they flow through a microfluidic channel, guided by sound waves.

Cells secrete nanoscale packets called exosomes that carry important messages from one part of the body to another. Scientists from MIT and other institutions have now devised a way to intercept these messages, which could be used to diagnose problems such as cancer or fetal abnormalities.

Their new device uses a combination of microfluidics and sound waves to isolate these exosomes from blood. The researchers hope to incorporate this technology into a portable device that could analyze patient blood samples for rapid diagnosis, without involving the cumbersome and time-consuming ultracentrifugation method commonly used today.

“These exosomes often contain specific molecules that are a signature of certain abnormalities. If you isolate them from blood, you can do biological analysis and see what they reveal,” says Ming Dao, a principal research scientist in MIT’s Department of Materials Science and Engineering and a senior author of the study, which appears in the Proceedings of the National Academy of Sciences the week of Sept. 18.

In 2014, the same team of researchers first reported that they could separate cells by exposing them to sound waves as they flowed through a tiny channel. This technique offers a gentler alternative to other cell-sorting technologies, which require tagging the cells with chemicals or exposing them to stronger mechanical forces that may damage them.

Since then, the researchers have shown that this technology can be used to isolate rare, circulating tumor cells from a blood sample. In their new study, they set out to capture exosomes. These vesicles, which are usually about 30 to 150 nanometers in diameter, can carry proteins, RNA, or other important cellular molecules.

Previous studies have revealed that exosome contents can serve as markers for disorders such as cancer, neurodegenerative disease, and kidney disease, among others. However, existing methods for isolating exosomes require high-speed centrifugation, which takes nearly 24 hours to perform, using a large machine that is not portable. The high centrifugal forces can also damage vesicles.

“Acoustic sound waves are much gentler,” Dao says. “These particles are experiencing the forces for only a second or less as they’re being separated, which is a big advantage.”

The researchers’ original acoustic cell-sorting device consists of a microfluidic channel exposed to two tilted acoustic transducers. When sound waves produced by these transducers encounter one another, they form standing waves that generate a series of pressure nodes. Each time a cell or particle flows through the channel and encounters a node, the pressure guides the cell a little further off center. The distance of cell movement depends on size and other properties such as compressibility, making it possible to separate cells of different sizes by the time they reach the end of the channel.

Using this device, it takes less than 25 minutes to process a 100-microliter undiluted blood sample.

“The new technique can address the drawbacks of the current technologies for exosome isolation, such as long turnaround time, inconsistency, low yield, contamination, and uncertain exosome integrity,” Huang says. “We want to make extracting high-quality exosomes as simple as pushing a button and getting the desired samples within 10 minutes.”

“This work provides a novel way to capture exosomes from human fluid samples through a unique combination of microfluidics and acoustics, using state-of-the-art microfabrication technologies,” Suresh says. “The capability of this method to separate these nanoscale vesicles, essentially without altering their biological or physical characteristics, offers appealing possibilities for developing new ways of assessing human health as well as the onset and progression of diseases.”

This new method of exosome isolation “may usher a new paradigm in disease diagnosis and prognosis,” says Taher Saif, a professor of mechanical science and engineering at the University of Illinois at Urbana-Champaign. “This paper presents a noninvasive, label-free, biocompatible, on-chip method to isolate exosomes rapidly from blood with ultrahigh precision,” says Saif, who was not involved in the research.

The research team now plans to use this technology to seek biomarkers that can reveal disease states. They have a joint grant from the National Institutes of Health to look for markers related to abnormal pregnancy, and they believe the technology could be used to help diagnose other health conditions as well.

“The new acoustofluidic technology has the potential to dramatically improve the process of isolation of exosomes and other extracellular vesicles from blood and other bodily fluids,” Sadovsky says. “This will add a new dimension to research into ‘liquid biopsy,’ and facilitate the clinical use of extracellular vesicles to inform the physiology and health of organs that are hard to access, such as the placenta during human pregnancy.”