The art and science of polymer chemistry 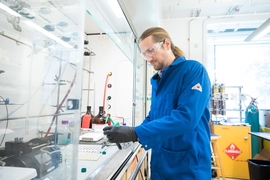 As a sophomore at Washington University, Jeremiah Johnson was offered a choice of three work-study jobs: checking IDs at the athletic center, working the circulation desk at the library, or washing glassware in a chemistry lab. The latter sounded the most interesting, so he ended up working in the lab of Karen Wooley, a well-known polymer chemist.

“I spent a month or two washing the glassware, but I was watching the students in the lab and would ask what they were doing,” Johnson says. “Eventually I asked Karen if it would be possible for me to get promoted from glass washer to helping out a graduate student or a postdoc on a project. Thankfully she said yes. If she said no, I don’t know where I would be today.”

Johnson is now a newly tenured associate professor in MIT’s Department of Chemistry, where he develops novel polymeric materials for drug delivery, energy, and other applications. He still vividly recalls the first chemical reaction he performed in Wooley’s lab — reduction of an ester using lithium aluminum hydride to produce a building block which could then be formed into a polymer.

“Maybe because it’s the first thing I worked on, but I’ve always liked polymers,” says Johnson, who is the Roger and Georges Firmenich Associate Professor of Natural Product Chemistry. “I’ve been studying them ever since.”

In high school, Johnson had two main interests: music and baseball. Raised by a single mother who worked as many as three jobs at a time, he grew up in a suburb of Tulsa, Oklahoma. At first, the only college he thought about attending was the University of Oklahoma, but when he learned about Washington University, which combined outstanding academics with the possibility of continuing his baseball career, Johnson decided it was the place for him.

Starting in middle school, he played in several bands and wrote his own music. “It was the grunge era,” he says. “I got my first guitar and thought I wanted to be Kurt Cobain.” He also played classical piano, which he began studying at age 4, and played the guitar in a jazz combo at Washington University.

Arriving at college, Johnson initially wanted to pursue an electrical engineering major, which he planned to leverage to build home recording studios one day. That interest morphed in biomedical engineering, until Johnson became interested in chemistry during his sophomore year. Most of his friends at school were pre-med, so he decided to take the required premed courses too, including organic chemistry. “I heard it was terrifying but I took it, and that ended up being my favorite class by far,” he says.

Around the same time, he started spending more time in Wooley’s polymer chemistry lab. “I just loved going to the lab. When I was not in class, I was in the lab running experiments,” he says. “Sometimes I would even skip class to go run experiments.”

He ended up leaving the baseball team midway through his sophomore year and added a chemistry major to the biomedical engineering major he was already working on. After graduating from college, he went to Columbia University, where he pursued his PhD with a physical organic chemist named Nicholas Turro, who was a pioneer in developing reactions induced by light. There, Johnson worked on creating polymers that can respond to light by growing or changing their shape.

After earning his PhD, Johnson went to Caltech for a postdoctoral fellowship, where he began developing polymers that would respond to light by releasing drug molecules. When applying for faculty jobs, he says he was drawn to MIT by the high quality of the students and faculty, which he found similar to Caltech.

In his research at MIT, Johnson focuses on developing new methods for synthesizing large molecules (“macromolecules”), and combining those methods in novel ways to come up with entirely new polymeric materials. For some of his projects, he has a specific application in mind from the beginning, but he also enjoys coming up with new kinds of molecules and then figuring out what they might be useful for.

“I sometimes view what I do as more of an art than a science,” he says. “I like to create beautiful, complicated molecules for the sake of pushing the limits of what we think is possible. It is like honing a craft. What we learn in this process can be applied to other situations and can allow us to solve important problems in new ways.”

One aspect of his research focuses on the challenge of making synthetic polymers with precise molecular structures. Most polymers consist of many chains with slightly different lengths, or different stereochemistry (the orientation of molecules attached to the polymer chains).

“It’s still not really possible for people to make purely synthetic polymers where every molecule in the sample is the same,” Johnson says. One strategy he is developing to enable more control over chain length is performing synthetic reactions that double the chain length with each reaction, instead of adding the monomer building blocks one by one.

In another area of research, he has developed polymers with a novel structure, known as brush arm star polymers, which can be loaded with precise ratios of different agents, including drugs. He has shown that nanoparticles consisting of many of these polymers can be used to deliver several drugs at once, which could be useful for carrying combination therapies for cancer. A pharmaceutical company that has licensed the technology hopes to test the particles in clinical trials next year.

Since joining the MIT faculty Johnson has had little time for music, but he says that the creative process he employs in his chemistry research stimulates the same part of his mind that was once devoted to music.

“I believe that I have a reservoir of creativity. Let’s say there are 100 units of creativity in me. In high school, 100 or 95 of those units were put into thinking about music. And over time, the units have shifted and now pretty much 100 percent of my creativity is put into chemistry. But it doesn’t feel like I’ve lost anything,” he says. “It’s a similar process.”