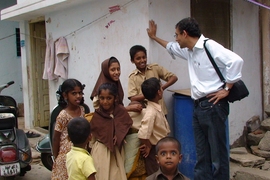 ↓ Download Image
Caption: A new study of rural India shows that modest levels of medical training can improve the quality of health care furnished by informal health care providers. The study was co-authored by Abhijit Banerjee, the Ford International Professor of Economics at MIT and a co-author of the study, pictured here on the right during a visit to India. 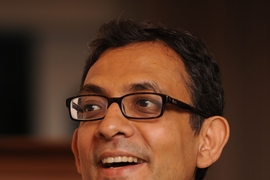 ↓ Download Image
Caption: A new study of rural India shows that modest levels of medical training can improve the quality of health care furnished by informal health care providers. The study was co-authored by Abhijit Banerjee, the Ford International Professor of Economics at MIT and a co-author of the study.

Caption:
A new study of rural India shows that modest levels of medical training can improve the quality of health care furnished by informal health care providers. The study was co-authored by Abhijit Banerjee, the Ford International Professor of Economics at MIT and a co-author of the study, pictured here on the right during a visit to India.
Credits:
Courtesy of Abhijit Banerjee

More specifically, the study, in the form of a novel field experiment conducted in the state of West Bengal, India, shows that informal care providers are more likely to handle cases correctly and compile basic checklists of patient information after undergoing about 150 hours of training over a period of months.

“They do seem to be learning, and they are using this knowledge,” says Abhijit Banerjee, the Ford International Professor of Economics at MIT and a co-author of the study.

The experiment analyzed whether unlicensed health care providers could act adequately when faced with information pertaining to three types of illness — chest pain, breathing problems, and diarrhea — that require different types of responses. Some cases require referrals to other providers; in other cases the primary-care providers can at least offer advice to help reduce the apparent medical problems at hand.

The low-cost experiment is now being scaled up by the state of West Bengal, to see if this approach can improve care for segments of the population that do not regularly access formal medical providers. About 54 percent of primary-care medical visits in West Bengal occur in these informal settings. That figure ranges as high as 75 percent in some other Indian states.

The paper, “The Impact of Training Informal Healthcare Providers in India: A Randomized Controlled Trial,” is being published Friday in the journal Science.

The co-authors are Banerjee; Jishnu Das of the World Bank; Abhijit Chowdhury of the Institute of Post Graduate Medical Education and Research at SSKM Hospitals in Kolkata, India; and Reshmaan Hussam PhD ’15, a postdoc at Yale University.

The study was conducted with the cooperation of 304 informal health care providers in West Bengal; the 150 hours of training the participants received was divided into 72 sessions over a nine-month period. The researchers used “standardized patients” to conduct the study — that is, people playing the role of patients who had symptoms consistent with angina, asthma, and diarrhea.

The results reveal that providers with training increased, by 4.1 percentage points, how often they developed a checklist of medical data relevant to the patients’ conditions — a standard medical practice that helps with diagnoses and patient assessments over time.

Similarly, informal providers increased their “correct case management,” an overall measure of their decision making in a given situation, by 7.9 percentage points. While trained informal providers still lag formally trained doctors in the region’s public clinics in this statistic, the training essentially cuts that gap in half.

To this end, the training course was not specifically focused on just the three illnesses but tried to improve diagnostic medical skills and decision-making more broadly.

“It evaluates your general skill as a health care provider,” Banerjee says. In daily medicine, he notes, “We [can’t] predict what condition [providers] will have to look at. A doctor deals with whatever occurs.”

The training did not have any effect in reducing the overprescription of medicine and antibiotics among informal providers.

As the researchers note, government policies vary globally when it comes to the roles that clinicians without full medical degrees can assume. In 25 of 47 sub-Saharan countries in Africa, as the paper observes, there is an officially sanctioned role for such clinicians.

Since the 1940s, India has discouraged an active role for providers without full medical training. However, such caregivers do exist because of the limited reach of formal medical providers.

Given this reality, the state of West Bengal helped provide funding for the current study, in order to see what impact it might have. The experiment was explicitly designed so that informal providers were not being required to provide immediate doses of medicine to the “standardized patients” they encountered.

“It was a state-government sponsored effort,” notes Banerjee. “These people exist, so the question is: What do you do about it?”

Banerjee acknowledges that the project simply represents one study, and thinks more on-the-ground research will be needed. West Bengal’s scale-up of the program is being launched this fall.

‘They are going to start training everybody,” Banerjee says, adding that the state government has “the aim of figuring out if this is a worthwhile investment for them.”

The study was supported by the West Bengal National Rural Health Mission, the World Bank’s Knowledge for Change program, and a Bristol Myers Squibb award.

BBC News reporter Atish Patel reports on a new study, co-authored by Prof. Abhijit Banerjee, that found informal health care providers in India can improve with modest training. The researchers found that those who had undergone training were more likely to “adhere to checklists after training and made big improvements in providing correct treatments.”