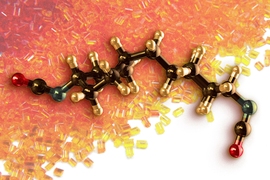 ↓ Download Image
Caption: Polymers, or long chains of repeating molecules, are found in many objects that we encounter every day, including anything made of plastic or rubber. These chains form networks in which each chain would ideally would bind to only one other chain. However, in real-life materials, a significant fraction of these chains bind to themselves, forming defects — floppy loops that weaken the network. 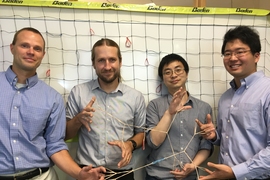 Caption:
Polymers, or long chains of repeating molecules, are found in many objects that we encounter every day, including anything made of plastic or rubber. In many materials, however, a significant fraction of these chains bind to themselves, forming defects.
Credits:
Image: Jose-Luis Olivares/MIT

Caption:
MIT researchers used specially designed polymers to demonstrate that they can count the number of defects in a material, allowing them to predict its elasticity.

All polymers have a distinctive degree of elasticity — how much they will stretch when a force is applied. However, for the past 100 years, polymer scientists have been stymied in their efforts to predict polymers’ elasticity, because the materials usually have structural flaws at the molecular level that impact elasticity in unknown ways.

By coming up with a way to measure these structural defects, MIT researchers have now shown that they can accurately calculate the elasticity of polymer networks such as hydrogels.

“This is the first time anyone has developed a predictive theory of elasticity in a polymer network, which is something that many have said over the years was impossible to do,” says Jeremiah Johnson, the Firmenich Career Development Associate Professor of Chemistry at MIT.

This theory could make it much easier for scientists to design materials with a specific elasticity, which is now more of a trial-and-error process.

Bradley Olsen, an associate professor of chemical engineering, and Johnson are the senior authors of the new study, which appears in the Sept. 15 online edition of Science. The paper’s lead authors are former MIT postdoc Mingjiang Zhong, postdoc Rui Wang, and graduate student Ken Kawamoto.

Polymers, or long chains of repeating molecules, are found in many objects that we encounter every day, including anything made of plastic or rubber. These chains form networks in which each chain would ideally bind to only one other chain. However, in real-life materials, a significant fraction of these chains bind to themselves, forming defects — floppy loops that weaken the network.

These loops also make it impossible to accurately calculate the material’s elasticity, because existing formulas for this calculation assume that the material has no defects.

In 2012, Johnson and Olsen published a paper in which they demonstrated a technique for counting these defects — the first time that had ever been achieved. The researchers designed polymer chains that incorporate at a specific location a chemical bond that can be broken using hydrolysis. Once the polymers link to form a gel, the researchers cleave the bonds and measure the quantity of different types of degradation products. By comparing that measurement with what would be seen in a defect-free material, they can figure out how much of the polymer has formed loops.

In the new study, the researchers built on that work by developing a way to determine how these defects influence the material’s elasticity. First, they calculated how a single defect would alter the elasticity. This number can then by multiplied by the total number of defects measured, which yields the overall impact on elasticity.

“We do one complicated calculation for each type of defect to calculate how it perturbs the structure of the network under deformation, and then we add up all of those to get an adjusted elasticity,” Olsen says.

After testing this approach on several materials, the researchers devised a theory that allows them to predict the elasticity of any polymer material. This theory proved to be much more accurate than the two existing approaches to calculating polymer elasticity (known as the affine network theory and phantom network model), both of which assume an ideal, defect-free network.

This model should be applicable to any type of polymer, says Sanat Kumar, a professor of chemical engineering at Columbia University, who was not involved in the research.

“They have taken an age-old problem and done very clear experiments and developed a very nice theory that moves the field up a whole quantum leap,” Kumar says.

The MIT team is now working on expanding this approach to other polymers. “I think within a few years you’ll see it broaden rapidly to cover more and more types of networks,” Olsen says.

The researchers are also interested in exploring other features of polymers that affect their elasticity and strength, including a property known as entanglement, which occurs when polymer chains are wound around each other like Christmas tree lights without chemically binding to each other.

The research was funded by the Designing Materials to Revolutionize and Engineer our Future (DMREF) program of the National Science Foundation (NSF), as well as the U.S. Army Research Office through MIT’s Institute for Soldier Nanotechnologies and the Materials Research Science and Engineering Centers Program of the NSF.