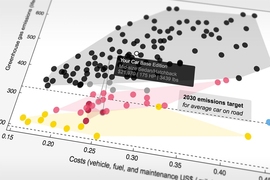 ↓ Download Image
Caption: Geoffrey Supran PhD ’16 says “there are a lot of myths floating around about hybrid and electric cars,” for example concerning the manufacture of those vehicles, or their reliance on conventional electricity sources. This often leads people to claim that “they’re no better than your average gasoline vehicle. Our study shows that’s just not true.”
Credits: Image courtesy of the researchers.

Caption:
Geoffrey Supran PhD ’16 says “there are a lot of myths floating around about hybrid and electric cars,” for example concerning the manufacture of those vehicles, or their reliance on conventional electricity sources. This often leads people to claim that “they’re no better than your average gasoline vehicle. Our study shows that’s just not true.”
Credits:
Image courtesy of the researchers.

You might think cars with low carbon emissions are expensive. Think again. A newly-published study by MIT researchers shows that when operating and maintenance costs are included in a vehicle’s price, autos emitting less carbon are among the market’s least expensive options, on a per-mile basis.

“If you look in aggregate at the most popular vehicles on the market today, one doesn’t have to pay more for a lower carbon-emitting vehicle,” says Jessika Trancik, the Atlantic Richfield Associate Professor in Energy Studies at the Institute for Data, Systems, and Society (IDSS) at MIT, and the study’s senior author. “In fact, the group of vehicles at the lower end of costs are also at the lowest end of emissions, even across a diverse set of alternative and conventional engines.”

The study also evaluates the U.S. automotive fleet — as represented by these 125 model types — against emissions-reduction targets the U.S. has set for the years from 2030 to 2050. Overall, the research finds, the average carbon intensity of vehicles that consumers bought in 2014 is more than 50 percent higher than the level it must meet to help reach the 2030 target. However, the lowest-emissions autos have surpassed the 2030 target.

“Most hybrids and electric vehicles on the road today meet the 2030 target, even with today’s electricity supply mix,” Trancik observes.

The new paper, “Personal Vehicles Evaluated against Climate Change Mitigation Targets,” is being published in the latest issue of the journal Environmental Science and Technology. The research group is also releasing the results in the form of an app that consumers can use to evaluate any or all of the 125 vehicle types.

A group of MIT researchers took a detailed look at 125 U.S. auto models and found those emitting less carbon are the least expensive to drive overall. Their CarbonCounter app allows you to look up emissions rates for your vehicle or one you are considering buying or leasing.

“Private citizens are the investors that will ultimately decide whether a clean-energy transition occurs in personal transportation. It’s important to consider the problem from the viewpoint of consumers on the ground,” Trancik says. “The goal here is to bring this information on the performance of cars to people’s fingertips, to empower them with the information needed to make emission- and energy-saving choices.”

In order to estimate the cost of the vehicles, the researchers accounted for both the sticker price and the operating costs over the vehicle lifetime. When estimating emissions, the calculations included emissions from each vehicle’s operations and the emissions stemming from manufacturing it, and producing its fuel.

The study takes a further step in calculating how far along today’s passenger-vehicle fleet is in relation to the pledged U.S. emissions reductions goals. To do so, the researchers looked at overall amount of reduction needed in the 2030-2050 time period, the fraction of it likely to come from LDVs, and incorporated the total distance these vehicles are estimated to travel in those years.

“To enable a fair comparison between cars of all technologies, we include all emissions coming from the fuel, electricity, and vehicle production supply chains,” Miotti says.

The researchers’ chart yields some clear trends among the vehicles. Smaller hybrids and electric vehicles such as the Toyota Prius and Nissan Leaf fare very well and are among the cheapest per mile driven. Small combustion-engine cars are also low in cost, but emit up to 40 percent more greenhouse gases than their hybrid and electric counterparts. The Chevrolet Suburban, by contrast, is among the most expensive and highest-emitting popular vehicles. Luxury sedans such as the Mercedes E350, the study found, are the one vehicle that is more expensive per mile than the Suburban, but emits about two-thirds as much carbon.

“Our results show that popular alternative-technology cars such as the Nissan Leaf can already save a considerable amount of emissions today, while being quite affordable when operating costs are considered,” Miotti observes. “Notably, the benefit of the efficient electric powertrain far outweighs the added emissions of manufacturing a battery.”

Supran says that “there are a lot of myths floating around about hybrid and electric cars,” for example concerning the manufacture of those vehicles, or their reliance on conventional electricity sources. This often leads people to claim that “they’re no better than your average gasoline vehicle. Our study shows that’s just not true.”

The enduring popularity of trucks and SUVs, Supran adds, shows that “[w]e’ve got a long way to go. Obviously the best option is to use public transport and, when possible, to not drive at all. But for those who have to, hopefully our work can help inform a generation of more climate-conscious car buyers.”

To be sure, as Trancik notes, larger vehicles such as the Suburban may also be transporting more people around, and thus may fare better when measured on a per-passenger-mile basis. But a central aim of the study, she adds, is to let consumers access more data, from which they can make their own additional assessments about their vehicle needs.

“There are a lot of opportunities for decarbonization in the transportation sector,” Trancik says. “It’s fairly easy to buy a lower-emissions vehicle if you have easy access to this information.”

To reach a wider audience, the team developed an app with which people can look up their current car, or a car they are considering buying or leasing, and see how it performs in terms of costs and carbon emissions.

Vehicle costs and emissions also vary regionally, as the study notes. For instance: Western states draw from renewable energy sources (mostly solar and wind) to a greater extent than, say, states in the Midwest. On aggregate, therefore, plug-in electric vehicles will draw upon cleaner sources of electricity in the West than in the Midwest, and produce lower emissions overall.

On a national basis, though, the study reinforces the need to continue modernizing the country’s vehicle fleet and decarbonizing it in the next few decades.

“To meet mid-century climate policy targets, what we would likely need to see is a near-complete electrification of vehicles within a few decades, alongside a decarbonization of electricity,” Trancik says.

In a letter to The Financial Times, Prof. Jessika Trancik, postdoc Geoffrey Supran, and graduate student Marco Miotti clarify results from a study the lab released last year that compares emissions of gas and electric vehicles. “Not only do electric cars usually emit less than petrol ones already, but over time, as the carbon footprint of electricity continues to fall, that gap will widen,” the researchers explain.

A study by MIT researchers finds that low-emissions vehicles are more cost effective when operating and maintenance costs are included in the price, writes Rae Ellen Bichell for NPR. The study also found that many battery electric and hybrid cars “already meet the global emissions goals the U.S. recently agreed to meet by the year 2030,” explains Bichell.

MIT researchers have developed an app that compares automobile emissions and emissions reduction targets to allow consumers to find the most affordable and climate-friendly vehicles, reports Dana Nuccitelli for The Guardian. The app “allows consumers to check how their own vehicles – or cars they’re considering purchasing – stack up on the carbon emissions and cost curves.”

MIT researchers have found that low-emissions vehicles are among the least expensive to drive. Based off their findings, the researchers developed an app that helps consumers evaluate a car’s carbon impact, reports John Schwartz for The New York Times.  “Consumers can save money and save emissions at the same time,” explains Prof. Jessika Trancik.