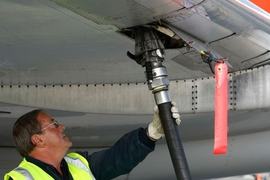 Caption:
“I see environmental issues as the largest existential threat to aviation; however I also see aviation as a critical link in solving worldwide environmental challenges,” John Hansman says.

Last month, the United States and 22 other countries agreed to the first-ever global carbon emissions standards for commercial aircraft. The standards, set by the United Nations’ International Civil Aviation Organization (ICAO), are estimated to reduce carbon emissions by more than 650 million tons between 2020 and 2040 — roughly equal to the emissions produced by 140 million cars in a single year.

John Hansman, professor of aeronautics and astronautics at MIT, led the MIT technical analysis that contributed to setting the standard. MIT News spoke with Hansman about MIT’s role in the international negotiations and whether a less polluting fleet will look much different from today’s aircraft designs.

Q: What technological and regulatory changes will have to be made in order to meet these aircraft emissions standards?

A: If (the standard) is adapted, basically new airplanes in the future will have to be at the state of the art of fuel efficiency. What that means is, the engines and the aerodynamics of the airplanes will have to be efficient, and the targets for efficiency will vary depending on the size or weight of the airplane: more aggressive for larger airplanes that fly longer distances — those would be Boeings, Airbus, et cetera — not as tight for small corporate jet airplanes.

Because fuel, particularly in the past few years, has been expensive, aircraft manufacturers have already been trying to make their planes as efficient as possible. This means the current airplanes that are the most efficient, like the Boeing 787 and the Airbus A350, will not change — they already meet the standard. But airplanes we’ve been producing for a long time, that are older designs, would have to be upgraded. So [the standard] puts a limit on how long those airplanes will be able to be produced before you have to modernize the design.

The airplanes will not look that different from the outside. Most of the changes are subtle and have to do with the engines, like the size of the fan in the engines, internal parts of the engine, the weight of the components, and the aerodynamics. You might see some external shape changes such as winglets, but many aircraft have already incorporated them for efficiency improvements.

Q: Does the technology exist today to meet these standards?

A: Yes. When you determine standards like this, there’s always a tension, which is, you’d like to make them as aggressive as possible. But if you make them unrealistically tough, people can’t [meet the standard]. So part of the analysis is to determine what’s feasible. When the standards were being evaluated, you couldn’t assume magic changes in technology. You tend to use the best demonstrated or available technology and aircraft as the existence proof for what you can get.

It’s possible that 10 or 20 years from now there will be new technologies. In fact we’re working on some, like the D8, Double Bubble [aircraft], which would be an improvement in efficiency well past what this standard would require. But at this point, the D8 is considered an unproven technology.

What we’re really doing is bringing everybody up to the level of technology that we know we can meet. There’s sort of a sweet spot of pushing the technology enough, but not pushing it so far that people are disincentivized to actually create new designs.

Q: What was MIT’s role within this international process?

A: About eight years ago, there was a subcommittee set up within the ICAO’s Committee on Aviation Environmental Protection to look at this with members from around the world. We were asked as part of the FAA’s Center of Excellence to come on this team to help do technical analysis and modeling of how good the technologies could be, how much improvement you could get, and what the impact would be on certain aircraft designs.

The first phase was to come up with the right metric. We were interested in CO2, but the amount of CO2 you generate is proportional to the amount of fuel you burn. So the ultimate metric became an equivalent to the miles per gallon you’d have for a car, and it’s called the Specific Air Range, versus the takeoff weight of the airplane. It was recognized that for higher takeoff weights, you’d have higher performance requirements.

Once the metric was agreed upon, it was then necessary to determine what the target levels would be — basically, what mile-per-gallon performance would be required to certify an aircraft. This will force some aircraft to have to be redesigned. As you can imagine, your view of where to draw the line depends on what country you are and what manufacturers are within your country.

Within MIT, we had worked on developing tools that could model both environmental and cost impacts of policy changes. One is the Aircraft Environmental Design Tool. What it does is to model all the aircraft flights around the world.  We can input the performance of each aircraft including its environmental performance. As the aircraft fly, we track the amount and location of emissions of CO2 and other effluents like sulfur dioxide. We can also look at noise impacts. Using the tool, we modeled the impact of the current fleet and then the impact of potential levels of the new standard. For a given level, of the airplanes that didn’t meet the standard, we created new designs for those airplane types, and flew the new designs, and modeled what the changed standard’s overall environmental impact would be. At the same time we modeled how much it would cost the industry to do this.

Q: This whole process sounds very similar to the wider climate talks that happened in Paris, which did not address aircraft emissions. What do these new standards say about the aviation industry’s contribution to and potential mitigation of global CO2?

A: Part of the reason aircraft were not specifically addressed [in Paris] is because they’re addressed within the ICAO process. Aviation is one of the few areas for which there is a well-established international process for a common set of operational rules and standards, because airplanes commonly fly around the world. So a system already exists; however, even with our current international aviation processes, agreeing on a CO2 standard was a major challenge.

I also want to say, aviation represents about 2 percent of man-made or anthropogenic CO2 emissions.  However, aviation does not have the alternatives (e.g. solar, nuclear, wind) that other emitters such as electrical power generation have. Aircraft have to lift their fuel source, so high energy-density fuels are important. Fossil fuels are currently the most practical. There is much work going on to develop biofuels, but aviation will be just one of the interested users if biofuels can be produced at scale.

I see environmental issues as the largest existential threat to aviation; however I also see aviation as a critical link in solving worldwide environmental challenges. Aviation allows and enables the connections between people around the world, which we need to agree to and implement worldwide solutions to these global challenges.