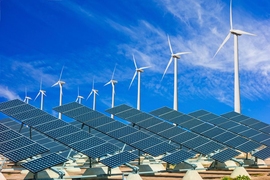 ↓ Download Image
Caption: “Researchers and practitioners have struggled to compare the costs of different [energy] storage technologies, because of the multiple dimensions of cost and the fact that no technology dominates along all dimensions," says Jessika Trancik, the Atlantic Richfield Career Development Assistant Professor of Energy Studies at MIT.

Caption:
“Researchers and practitioners have struggled to compare the costs of different [energy] storage technologies, because of the multiple dimensions of cost and the fact that no technology dominates along all dimensions," says Jessika Trancik, the Atlantic Richfield Career Development Assistant Professor of Energy Studies at MIT.

Utility companies or others planning to install renewable energy systems such as solar and wind farms have to decide whether to include large-scale energy storage systems that can capture power when it’s available and release it on demand. This decision may be critical to the future growth of renewable energy.

The choices can be complicated: Would such a system actually pay for itself through increased revenues? If so, which kind of system makes the most sense, and which features of the system are most important? If not, how much cheaper do storage technologies need to be?

A new study by researchers at MIT shows how to evaluate the technology choices available, including batteries, pumped hydroelectric storage, and compressed air energy storage, and demonstrates that even with today’s prices for these technologies, such storage systems make good economic sense in some locations, but not yet in others. The study, by Jessika Trancik, the Atlantic Richfield Career Development Assistant Professor of Energy Studies at MIT, and graduate students William Braff and Joshua Mueller, was just published in the journal Nature Climate Change.

“Researchers and practitioners have struggled to compare the costs of different storage technologies,” Trancik explains, “because of the multiple dimensions of cost and the fact that no technology dominates along all dimensions. Storage technologies can only be compared by looking at the contexts in which they are going to be used.” But the study  found that regardless of the particular circumstances at a given location, certain features of how electricity prices fluctuate are common across locations and do favor some specific types of storage solutions over others.

Selling at the peak price

For example, the team found that in Texas today, pumped hydro systems can provide added value today for solar or wind installations. In these systems, excess power is used to pump water uphill to a reservoir for storage, and then the water is released through a turbine to generate power when it is needed. The increased revenue the plant can produce, by waiting to sell the power into the grid until spot-prices for electricity — the constantly-changing market rate that electricity distributors pay to producers — are at their peak, would exceed the costs of the added storage system.

Further, they found that such pumped hydro storage provides more value than a storage system using lead-acid batteries even though its power capacity components would cost several times more. This is because a pumped hydro system has lower energy-capacity costs than lead-acid battery system. (Energy capacity refers to the overall amount of energy that can be stored in the system, and power capacity refers to how much energy can be delivered at a given moment from that system). A compressed air storage system could also add value comparable to that of the pumped hydro system. However, batteries are attractive, the researchers note, because they can be installed essentially anywhere and do not rely on natural features that exist only in some locations.

The researchers point out that much research on storage systems for renewable energy sources has focused on using the systems to smooth out the intermittent outputs to better match fluctuating demand. But in practice, most of these wind or solar farms are feeding into the grid, so what matters to potential investors is the price curve rather than the demand curve.

Surprisingly, it turned out that despite wide regional variations in the average prices and the amount of variability in demand and pricing, “the best storage technology in one location is also the best in the other,” Trancik says. “This is because of the similarity across locations in the distribution of the duration of electricity price spikes. This pattern likely emerges because of constraints imposed by the daily cycle, and similarities in when people go to work and go home, and generally how they spend their time.”

Whether an energy storage system is worth the cost today varies widely by location, because of large variations in the frequency and magnitude of spikes in the price and how the solar and wind resources fluctuate over time, she says. But the cost characteristics of the optimal storage systems are similar in all locations, the researchers found, because of certain common, emergent properties of electricity price fluctuations.

“This means that these results can be used to inform investments in storage technology development by the private sector and government, and can inform engineering efforts in the lab,” Trancik says. “The results would have been less general and less useful to technology development efforts if we’d found that the direction of optimal cost improvement, trading off energy capacity and power capacity costs, was different across locations.”

At this time, the study found, the costs of such systems don’t yet make them profitable enough without policy support to enable the kind of widespread adoption that is needed to make a large dent in global greenhouse gas emissions. But, Trancik says, this study does suggest that market adoption already makes sense in some locations, and could be boosted with modest public policy support, which in turn would stimulate technological improvement in storage to encourage further growth. The study also provides guidance on how much the costs of a given technology need to be brought down in order to enable such deployment, and which aspects of the system need the greatest improvement — and thus, where research needs to be focused. For example it provides cost targets for various flow batteries that are in development.

For this study, the team examined three states: Texas, California, and Massachusetts. They found storage systems make economic sense today in Texas and California but not yet in Massachusetts. They plan to broaden the study to more locations to see if their overall conclusions apply more widely.

In one somewhat counterintuitive finding, they say that as the cost of wind and solar power systems comes down, the cost of storage systems will need to come down as well or they will no longer be profitable. That’s because at some point it would be more profitable to simply add more generating capacity rather than more storage capacity. The researchers note that there is a window of opportunity now for storage to be adopted in the marketplace. But they warn that the incentives will diminish over time if no action is taken now, and if wind and solar costs fall further.

Trancik says this research falls in an area she refers to as “directed innovation,” in which decisions about what areas of research, technology designs, and policies are most needed in order to achieve specific societal goals can be based on clearly quantifiable criteria. “The idea is to use data and models to accelerate energy technology development,” she says.

“Since storage involves both energy and power characteristics, among others, improving these technologies involves targeting multiple criteria. If a utility, researcher, or technology investor were considering which research directions would be most likely to increase the value of storage, this method would be a great place to start,” says Gregory Nemet, an associate professor of environmental studies at the University of Wisconsin at Madison who was not involved in this work.

“A strength of the study is the extensive sensitivity analysis. It takes several factors into account and then uses alternative assumptions for each factor to see if that changes the results,” Nemet adds. “It is thus impressive that after doing that, they find that existing storage technologies, such as pumped hydro and compressed air, can already add value to wind and solar.  Storage adds value to renewables today, even in very different locations.”

This work was supported by the MIT Portugal Program, Lockheed Martin, and the SUTD-MIT International Design Center.

Shedding light on the future of photovoltaics

Innovation in renewable-energy technologies is booming