Needles that hit the right mark 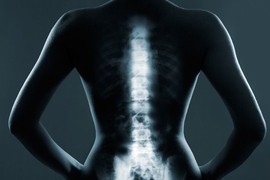 ↓ Download Image
Caption: Researchers designed and tested several types of optical sensors that could be placed at the tip of an epidural needle and determined that the best is one that relies on Raman spectroscopy. This technique, which uses light to measure energy shifts in molecular vibrations, offers detailed information about the chemical composition of tissue.

Caption:
Researchers designed and tested several types of optical sensors that could be placed at the tip of an epidural needle and determined that the best is one that relies on Raman spectroscopy. This technique, which uses light to measure energy shifts in molecular vibrations, offers detailed information about the chemical composition of tissue.

More than 13 million pain-blocking epidural procedures are performed every year in the United States. Although epidurals are generally regarded as safe, there are complications in up to 10 percent of cases, in which the needles are inserted too far or placed in the wrong tissue.

A team of researchers from MIT and Massachusetts General Hospital hopes to improve those numbers with a new sensor that can be embedded into an epidural needle, helping anesthesia doctors guide the needle to the correct location.

Currently, anesthesiologists must guide a four- to six-inch needle through multiple layers of tissue to reach the epidural space surrounding the spinal cord. They know when the needle has reached the right spot based on how the tissue’s resistance changes. However, some patients’ tissues vary from the usual pattern, which can make it more difficult to determine whether the needle is in the right place.

“The needle is placed essentially blindly,” says T. Anthony Anderson, an anesthesiologist at MGH and an assistant professor at Harvard Medical School. “The needle can go too far or into the wrong tissue, which means the patient doesn’t get the positive effect that you want or is injured.”

In most cases, these complications lead to reduced effectiveness of the pain-killing drug, or an excruciating post-procedure headache. In rare cases in which the needle goes too far or into a blood vessel, a stroke or spinal cord injury can occur.

To improve the accuracy of epidural needle placement, Anderson teamed up with researchers at MIT’s Laser Biomedical Research Center, headed by Peter So, a professor of mechanical engineering and biological engineering.

So and MIT research scientist Jeon Woong Kang designed and tested several types of optical sensors that could be placed at the tip of an epidural needle and determined that the best is one that relies on Raman spectroscopy. This technique, which uses light to measure energy shifts in molecular vibrations, offers detailed information about the chemical composition of tissue. In this case, the researchers measured the concentrations of albumin, actin, collagen, triolein, and phosphatidylcholine to accurately identify different tissue layers.

This sensor, which the researchers described in the journal Anesthesiology, provides immediate feedback telling the anesthesiologist which tissue the needle is in. As an epidural needle is inserted, it passes through five layers — skin, fat, supraspinous ligament, interspinous ligament, and ligamentum flavum — before reaching the epidural space, which is the target. Beyond that space lies the dura mater, a stiff membrane that surrounds the spinal cord and cerebrospinal fluid.

The researchers have tested the sensor in pig tissue and now plan to do further animal studies before testing it in human patients. They also plan to reduce the diameter of the sensor slightly, from 2 millimeters, which is too large to fit in the most commonly used epidural needles, to 0.5 mm.

Jeanine Wiener-Kronish, chief of anesthesia and critical care at MGH, says this type of sensor could greatly improve safety for epidurals, as well as other procedures involving needles.

“The era of blind procedures is one we need to move away from, because we’re very interested in improving safety and quality,” says Wiener-Kronish, who was not involved in the research. “This sensor could allow us to take a fairly blind procedure and be able to get more information about where the needle is.”

The researchers have started a company, Medisight Corp., to continue developing the technology, which they believe could also be applied to medical procedures, such as cancer biopsies or injecting drugs into the joints, which can be difficult to do accurately. This commercialization effort is supported by MIT entrepreneurship programs, including the MIT Translational Fellows Program, MIT Venture Mentoring Service, and MIT Innovation Initiative. The team also received support from the National Science Foundation in the form of a Small Business Technology Transfer program grant.

In addition to So, Kang, and Anderson, authors of the paper include Tatyana Gubin, an MIT undergraduate, and Ramachandra Dasari, a principal research scientist in MIT’s Department of Chemistry.

Cells get ready for their close-up

Improving the accuracy of cancer diagnoses

How to reverse general anesthesia