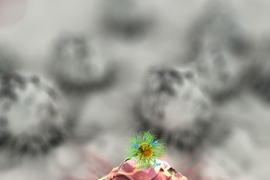 ↓ Download Image
Caption: Researchers at MIT are developing an adhesive patch that can stick to a tumor site, either before or after surgery. The patch delivers a triple-combination of drug, gene, and photo (light-based) therapy via specially designed nanospheres and nanorods, shown here attacking a tumor cell.

Caption:
Researchers at MIT are developing an adhesive patch that can stick to a tumor site, either before or after surgery. The patch delivers a triple-combination of drug, gene, and photo (light-based) therapy via specially designed nanospheres and nanorods, shown here attacking a tumor cell.
Credits:
Image: Ella Maru

Approximately one in 20 people will develop colorectal cancer in their lifetime, making it the third-most prevalent form of the disease in the U.S. In Europe, it is the second-most common form of cancer.

The most widely used first line of treatment is surgery, but this can result in incomplete removal of the tumor. Cancer cells can be left behind, potentially leading to recurrence and increased risk of metastasis. Indeed, while many patients remain cancer-free for months or even years after surgery, tumors are known to recur in up to 50 percent of cases.

Conventional therapies used to prevent tumors recurring after surgery do not sufficiently differentiate between healthy and cancerous cells, leading to serious side effects.

In a paper published today in the journal Nature Materials, researchers at MIT describe an adhesive patch that can stick to the tumor site, either before or after surgery, to deliver a triple-combination of drug, gene, and photo (light-based) therapy.

Releasing this triple combination therapy locally, at the tumor site, may increase the efficacy of the treatment, according to Natalie Artzi, a principal research scientist at MIT’s Institute for Medical Engineering and Science (IMES) and an assistant professor of medicine at Brigham and Women’s Hospital, who led the research.

The general approach to cancer treatment today is the use of systemic, or whole-body, therapies such as chemotherapy drugs. But the lack of specificity of anticancer drugs means they produce undesired side effects when systemically administered.

What’s more, only a small portion of the drug reaches the tumor site itself, meaning the primary tumor is not treated as effectively as it should be.

Indeed, recent research in mice has found that only 0.7 percent of nanoparticles administered systemically actually found their way to the target tumor.

“This means that we are treating both the source of the cancer — the tumor — and the metastases resulting from that source, in a suboptimal manner,” Artzi says. “That is what prompted us to think a little bit differently, to look at how we can leverage advancements in materials science, and in particular nanotechnology, to treat the primary tumor in a local and sustained manner.”

The researchers have developed a triple-therapy hydrogel patch, which can be used to treat tumors locally. This is particularly effective as it can treat not only the tumor itself but any cells left at the site after surgery, preventing the cancer from recurring or metastasizing in the future.

Firstly, the patch contains gold nanorods, which heat up when near-infrared radiation is applied to the local area. This is used to thermally ablate, or destroy, the tumor.

These nanorods are also equipped with a chemotherapy drug, which is released when they are heated, to target the tumor and its surrounding cells.

Finally, gold nanospheres that do not heat up in response to the near-infrared radiation are used to deliver RNA, or gene therapy to the site, in order to silence an important oncogene in colorectal cancer. Oncogenes are genes that can cause healthy cells to transform into tumor cells.

The researchers envision that a clinician could remove the tumor, and then apply the patch to the inner surface of the colon, to ensure that no cells that are likely to cause cancer recurrence remain at the site. As the patch degrades, it will gradually release the various therapies.

The patch can also serve as a neoadjuvant, a therapy designed to shrink tumors prior to their resection, Artzi says.

When the researchers tested the treatment in mice, they found that in 40 percent of cases where the patch was not applied after tumor removal, the cancer returned.

But when the patch was applied after surgery, the treatment resulted in complete remission.

Indeed, even when the tumor was not removed, the triple-combination therapy alone was enough to destroy it.

The technology is an extraordinary and unprecedented synergy of three concurrent modalities of treatment, according to Mauro Ferrari, president and CEO of the Houston Methodist Research Institute, who was not involved in the research.

“What is particularly intriguing is that by delivering the treatment locally, multimodal therapy may be better than systemic therapy, at least in certain clinical situations,” Ferrari says.

Unlike existing colorectal cancer surgery, this treatment can also be applied in a minimally invasive manner. In the next phase of their work, the researchers hope to move to experiments in larger models, in order to use colonoscopy equipment not only for cancer diagnosis but also to inject the patch to the site of a tumor, when detected.

“This administration modality would enable, at least in early-stage cancer patients, the avoidance of open field surgery and colon resection,” Artzi says. “Local application of the triple therapy could thus improve patients’ quality of life and therapeutic outcome.”

Artzi is joined on the paper by João Conde, Nuria Oliva, and Yi Zhang, of IMES. Conde is also at Queen Mary University in London.