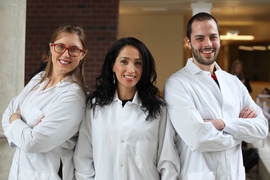 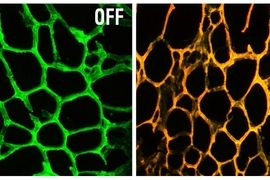 ↓ Download Image
Caption: At left is the new nanodevice, consisting of a hydrogel embedded with gold nanoparticles coated with DNA targeting a gene called MRP-1. At right, the device fluoresces after encountering the target gene sequence.
Credits: Courtesy of the researchers

Caption:
At left is the new nanodevice, consisting of a hydrogel embedded with gold nanoparticles coated with DNA targeting a gene called MRP-1. At right, the device fluoresces after encountering the target gene sequence.
Credits:
Courtesy of the researchers

Chemotherapy often shrinks tumors at first, but as cancer cells become resistant to drug treatment, tumors can grow back. A new nanodevice developed by MIT researchers can help overcome that by first blocking the gene that confers drug resistance, then launching a new chemotherapy attack against the disarmed tumors.

The device, which consists of gold nanoparticles embedded in a hydrogel that can be injected or implanted at a tumor site, could also be used more broadly to disrupt any gene involved in cancer.

“You can target any genetic marker and deliver a drug, including those that don’t necessarily involve drug-resistance pathways. It’s a universal platform for dual therapy,” says Natalie Artzi, a research scientist at MIT’s Institute for Medical Engineering and Science (IMES), an assistant professor at Harvard Medical School, and senior author of a paper describing the device in the Proceedings of the National Academy of Sciences the week of March 2.

To demonstrate the effectiveness of the new approach, Artzi and colleagues tested it in mice implanted with a type of human breast tumor known as a triple negative tumor. Such tumors, which lack any of the three most common breast cancer markers — estrogen receptor, progesterone receptor, and Her2 — are usually very difficult to treat. Using the new device to block the gene for multidrug resistant protein 1 (MRP1) and then deliver the chemotherapy drug 5-fluorouracil, the researchers were able to shrink tumors by 90 percent in two weeks.

MRP1 is one of many genes that can help tumor cells become resistant to chemotherapy. MRP1 codes for a protein that acts as a pump, eliminating cancer drugs from tumor cells and rendering them ineffective. This pump acts on several drugs other than 5-fluorouracil, including the commonly used cancer drug doxorubicin.

“Drug resistance is a huge hurdle in cancer therapy and the reason why chemotherapy, in many cases, is not very effective”, says João Conde, an IMES postdoc and lead author of the PNAS paper.

To overcome this, the researchers created gold nanoparticles coated with strands of DNA complementary to the sequence of MRP1 messenger RNA — the snippet of genetic material that carries DNA’s instructions to the rest of the cell.

These strands of DNA, which the researchers call “nanobeacons,” fold back on themselves to form a closed hairpin structure. However, when the DNA encounters the correct mRNA sequence inside a cancer cell, it unfolds and binds to the mRNA, preventing it from generating more molecules of the MRP1 protein. As the DNA unfolds, it also releases molecules of 5-fluorouracil that were embedded in the strand. This drug then attacks the tumor cell’s DNA, since MRP1 is no longer around to pump it out of the cell.

“When we silence the gene, the cell is no longer resistant to that drug, so we can deliver the drug that now regains its efficacy,” Conde says.

When each of these events occurs — sensing the MRP1 protein and releasing 5-fluorouracil — the device emits fluorescence of different wavelengths, allowing the researchers to visualize what is happening inside the cells. Because of this, the particles could also be used for diagnosis — specifically, determining if a certain cancer-related gene is activated in tumor cells.

The DNA-coated gold nanoparticles are embedded in an adhesive gel that stays in place and coats the tumor after being implanted. This local administration of the particles protects them from degradation that might occur if they were administered throughout the body, and also enables sustained drug release, Artzi says.

In their mouse studies, the researchers found that the particles could silence MRP1 for up to two weeks, with continuous drug release over that time, effectively shrinking tumors.

This approach could be adapted to deliver any kind of drug or gene therapy targeted to a specific gene involved in cancer, the researchers say. They are now working on using it to silence a gene that stimulates gastric tumors to metastasize to the lungs.

“This is an impressive study that harnesses expertise at the interface of materials science, nanotechnology, biology, and medicine to enhance the efficacy of traditional chemotherapeutics,” says Jeffrey Karp, an associate professor of medicine at Harvard Medical School and Brigham and Women’s Hospital, who was not involved in the research. “Hopefully this approach will perform in studies beyond 14 days and be translatable to patients, who are desperate for new and more effective treatment regimens.”

Graduate student Nuria Oliva is also an author of the paper. The research was funded by the National Cancer Institute and a Marie Curie International Outgoing Fellowship.