Pick an issue and dive in! 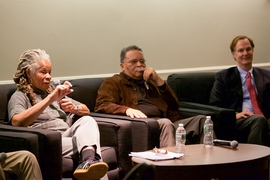 ↓ Download Image
Caption: The 1960s were “a heady time for the nation,” recalled civil rights activist Janet Moses, left, at a luncheon celebrating “Activism in the Era of MLK.” Topper Carew, middle, a filmmaker originally from Boston’s Roxbury neighborhood and a principal investigator at MIT’s Media Lab, was also on the panel led by Institute Community and Equity Officer Edmund Bertschinger, right.
Credits: Photo: Jose-Luis Olivares/MIT 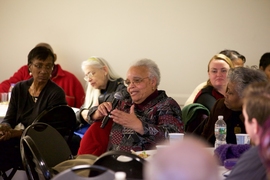 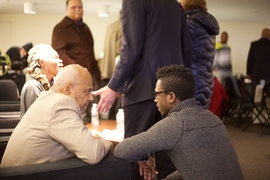 Caption:
The 1960s were “a heady time for the nation,” recalled civil rights activist Janet Moses, left, at a luncheon celebrating “Activism in the Era of MLK.” Topper Carew, middle, a filmmaker originally from Boston’s Roxbury neighborhood and a principal investigator at MIT’s Media Lab, was also on the panel led by Institute Community and Equity Officer Edmund Bertschinger, right.

Caption:
Robert Moses, left, who co-founded the Algebra Project with his wife, Janet Moses, speaks with an audience member after the luncheon.

At a luncheon on Wednesday at MIT celebrating “Activism in the Era of MLK,” three iconic figures from the civil rights movement in the 1960s recalled their experiences during those turbulent and dangerous times as they worked alongside Martin Luther King Jr. and other leaders of the movement. They urged today’s students to continue to fight in a struggle that they say has really never ended.

The 1960s were “a heady time for the nation,” recalled Janet Moses, a physician who worked at MIT Medical and was a co-founder, with her husband Robert Moses, of the Algebra Project, which teaches math skills to inner-city youths. For Janet Moses, who was born and raised in New York City’s South Bronx at a time when career opportunities for women of color were highly limited, the murder of black teenager Emmett Till in 1955 was a big turning point. Two years after that horrific event, “I decided to go to Mississippi,” she said. “I realized I couldn’t look at myself in the mirror if I didn’t go.” That was the beginning of years of demonstrating and organizing for voter rights in the South.

Topper Carew, a filmmaker originally from Boston’s Roxbury neighborhood, who is a principal investigator at MIT’s Media Lab, recalled growing up in a highly segregated Boston area and attending schools that were predominantly white: “There was not one friend of mine who had not been chased in Boston” and in some cases punched without provocation. Carew’s commitment to the growing civil rights movement gained urgency during demonstrations against Alabama governor George Wallace’s 1964 campaign for the presidency, on an overtly racist platform. As Carew worked on voter registration in the South during that campaign, he realized “there were people gunning for you” simply for trying to get black people registered to vote. “My life was changed forever,” he says.

Carew, who attended Howard University, became involved with a student group there called the Nonviolent Action Group (NAG), which also included civil rights activist Stokely Carmichael, who later became one of the founders of the Black Panthers. The group’s members decided that in the midst of rampant segregation and racial violence “their lives in this country didn’t mean anything unless they could struggle” for significant change, he said.

Robert Moses, who was raised in Harlem, New York, and earned his doctorate at Harvard University, said that when segregationists in the South complained that voter registration efforts were, in effect, “taking illiterates down to vote,” it brought home the fact of this nation’s highly unequal education system. “The problem in this country was that we ran a sharecropper education. And we still run a sharecropper education,” aimed at preparing people of color for lifetimes of menial jobs, he said.

The focus on Mississippi during those early voter registration efforts was no accident, Moses said. “In some sense, Mississippi chose itself,” he said, because of its intransigent resistance to the implementation of civil rights laws. When people from the North traveled there to help with registration drives, they faced arrest and jail terms. But the protesters had one trump card: Federal law provided specific protection for registering to vote or helping others to do so.

“Every time we were arrested, the justice department would come and get us out. So every time, we would just stay in jail a couple of days,” Moses said. “It blew my mind,” he recalled, when he realized there were Congressional districts there whose populations were overwhelmingly black but had never elected a black Congressman. At a time when the “Iron Curtain” still dominated international affairs, he recognized that the U.S. had its own “cotton curtain” blocking the voting rights of blacks in the South.

A turning point for the movement came at the 1964 Democratic National Convention, when a “Freedom Delegation” challenged the all-white official Mississippi delegation. Though the challenge was unsuccessful, it drew more national attention to the movement. Martin Luther King was at the convention, but it was another voice that especially galvanized the nation’s attention, Moses said: “It was Fannie Lou Hamer, who had the message in her bones. When she spoke, no one could deny her.”

When a student at Wednesday’s luncheon asked the speakers what young people today should focus on in carrying the movement for equality forward, Carew said that Howard University’s NAG provides a useful example. Even though the group only involved about 30 students, “what it said to me is you don’t always need substantial numbers of people to strongly influence social change.”

“Black Lives Matter is the beginning of the kind of messaging approach we need,” Carew said.

Janet Moses pointed out that the public today is mostly unaware of significant struggles that are still taking place. “Prisoners in this country have been on strike since September 19,” protesting what amounts to a modern form of involuntary servitude, she said. “It’s important to listen, because there are rumblings all over.”

She said that back in the ’60s, “at some point in our journey, we had decided that our individual lives were not important,” and that what mattered was to make a difference in fighting injustice. For today’s youth, she said, the question is “what are you willing to give up” in order to bring about social change.

As for the most important areas that activists for equal rights today should focus on, she quoted a parable cited by Julius Nyerere, the first prime minister of Tanzania when the country gained its independence: “A baby caterpillar asks its mother, ‘Which leg should I move first?’ and the mother caterpillar says ‘It doesn’t matter, you just need to move!’”

Moses added, “if you’re diving into any issue, it’s all the same pool. Pick a movement, pick an issue that you’re passionate about, and dive deeply into that!”