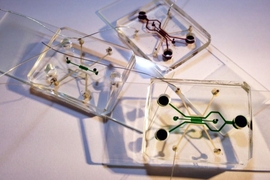 ↓ Download Image
Caption: A photo of three microfluidic devices filled with food color dyes. The device, about the size of a credit card, is designed to help scientists narrow in on safe ranges of electric fields that might be used to noninvasively treat breast, lung, and other forms of cancer. 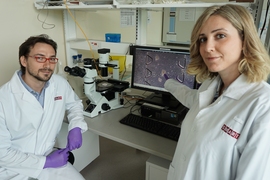 Caption:
A photo of three microfluidic devices filled with food color dyes. The device, about the size of a credit card, is designed to help scientists narrow in on safe ranges of electric fields that might be used to noninvasively treat breast, lung, and other forms of cancer.

Researchers at MIT’s research center in Singapore have developed a new microfluidic device that tests the effects of electric fields on cancer cells. They observed that a range of low-intensity, middle-frequency electric fields effectively stopped breast and lung cancer cells from growing and spreading, while having no adverse effect on neighboring healthy cells.

The device, about the size of a U.S. dollar coin, is designed to help scientists narrow in on safe ranges of electric fields to noninvasively treat breast, lung, and other forms of cancer. The results are published online in Scientific Reports.

“We hope this device will increase interest by researchers who are exploring the effect of electric fields on different types of cancer,” Adriani says. “In our study, we noticed the effect was limited to the cancer cell at the tested frequencies and intensities, but we really need to explore other cells and parameters.”

For the past decade, scientists have been experimenting with the use of electric fields to treat malignant cells, in an alternative cancer treatment called tumor treating field, or TTF. The therapy stems from the interaction between key cellular structures in tumors, and an external electric field.

In general, an electric field is a field of forces that act on objects that have an electric charge. An electric field can also influence the alignment of polar molecules in tumor cells, such as microtubules. Normally, these molecules are crucial for cell division, which, when it goes into overdrive, leads to tumor growth. When microtubules line up end to end to form a mitotic spindle, the cell’s genetic material attaches to the spindle fibers, pulling and splitting the cell into two cells.

In the past, scientists have observed that these charged molecules respond to a low-frequency electric field, between 100 and 300 kilohertz and with an intensity as strong as the field strength of a mixer or toaster. Instead of forming mitotic spindles, the microtubule alignment is disrupted in such a way that it prevents cell division and tumor growth.

“Scientists have been trying to figure out a lot of different recipes to try to stimulate the cell with an electric field,” Pavesi says. “By tweaking the intensity and frequency, you can have an effect only on the cancer cells, leaving the other type of cells unaltered, without destroying them. That’s the key concept.”

A company, Novocure, has since been founded to develop TTF therapies for people with brain and lung cancer. Pavesi, who has been helping to design microfluidic devices with Kamm, came up with the idea for a device to test TTF after watching a TED talk by Novocure’s founder.

“Immediately, I was thinking to myself, ‘This is an easy thing I can replicate in one of my devices,’” Pavesi recalls.

The researchers fabricated the device from PDMS, a widely used, gel-like polymer, and patterned small channels across the device. They then developed a conductive mixture made from micron-sized silver flakes and PDMS, which they cured, then injected into two channels in the device to form two tiny, separate electrodes. In the region between the electrodes, they injected hydrogels with breast or lung cancer cells as well as small tumor masses. The researchers also injected healthy human endothelial cells. The hydrogels created a three-dimensional matrix to mimic the extracellular environment.

The team subjected each cell type in the 3-D matrix to alternating electric fields at frequencies of 150 or 200 kilohertz, continuously, at an intensity of 1.1 volts per centimeter.

In the absence of an electric field, Pavesi says the cancer cells begin to proliferate and spread within two days. However, he and Adriani observed a significant slowdown in tumor progression after three days of continuous electric field stimulation: Proliferation was markedly reduced, while small masses of lung cancer cells did not disperse indicating an inhibition of their metastatic potential. What’s more, healthy endothelial cells in the same device were left unaffected. The researchers hypothesize that healthy cells may require different frequencies to be influenced by an electric field, as their size and electrical properties are far different from that of cancer cells.

Adriani hopes the microfluidic device can help scientists test a wide range of electric field intensities and frequencies on other cancer cell types. While TTF therapy has been approved by the Food and Drug Administration for treating brain tumors, that approval process took years to test electric fields, first in vitro, then in animals and in humans. Pavesi says a microfluidic device could speed up that process.

“Maybe by screening TTF to optimize frequency and intensity, you can at least reduce the time it takes for in vivo studies,” Pavesi says. “There may be thousands of variables, but you could first try them in this device. If you find 10 that work, you can go ahead and try those 10 in the animal model.”

Ultimately, the device may be used to identify the most effective electric field to treat cancer cells taken directly from a patient, says Chwee Teck Lim, a professor of biomedical engineering at the National University of Singapore, who did not participate in the study.

“One step forward that the group can take is to start testing on cancer patient-derived cells either obtained from tumor or liquid biopsy, such as circulating tumor cells, and to see if there are particular types of cancer cells that will succumb to or be more resistant to such TTF treatment,” Lim says.

“For personalized medicine, you can test if a recipe works for a specific person,” Adriani says. “In three days, you can have an answer. And for many cancer patients who are dying of metastasis, time is everything.”

This research was supported, in part, by the National Research Foundation of Singapore through the Singapore-MIT Alliance for Research and Technology BioSystems and Micromechanics interdisciplinary research group.

A microchip for metastasis