A microchip for metastasis 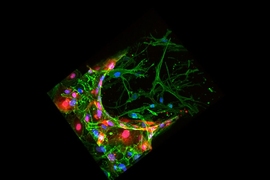 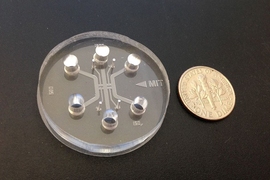 Nearly 70 percent of patients with advanced breast cancer experience skeletal metastasis, in which cancer cells migrate from a primary tumor into bone — a painful development that can cause fractures and spinal compression. While scientists are attempting to better understand metastasis in general, not much is known about how and why certain cancers spread to specific organs, such as bone, liver, and lungs.

Now researchers from MIT, Italy, and South Korea have developed a three-dimensional microfluidic platform that mimics the spread of breast cancer cells into a bonelike environment.

The microchip — slightly larger than a dime — contains several channels in which the researchers grew endothelial cells and bone cells to mimic a blood vessel and bone side-by-side. They then injected a highly metastatic line of breast cancer cells into the fabricated blood vessel.

Twenty-four hours later, the team observed that twice as many cancer cells had made their way through the vessel wall and into the bonelike environment than had migrated into a simple collagen-gel matrix. Moreover, the cells that made it through the vessel lining and into the bonelike setting formed microclusters of up to 60 cancer cells by the experiment’s fifth day.

“You can see how rapidly they are growing,” says Jessie Jeon, a graduate student in mechanical engineering. “We only waited until day five, but if we had gone longer, [the size of the clusters] would have been overwhelming.”

The team also identified two molecules that appear to encourage cancer cells to metastasize: CXCL5, a protein ligand secreted by bone cells, and CXCR2, a receptor protein on cancer cells that binds to the ligand. The preliminary results suggest that these molecules may be potential targets to reduce the spread of cancer.

Jeon says the experiments demonstrate that the microchip may be used in the future to test drugs that might stem metastasis, and also as a platform for studying cancer’s spread to other organs.

She and her colleagues, including Roger Kamm, the Cecil and Ida Green Distinguished Professor of Mechanical and Biological Engineering at MIT, have outlined the results of their experiments in the journal Biomaterials.

“Currently, we don't understand why certain cancers preferentially metastasize to specific organs,” Kamm says. “An example is that breast cancer will form metastatic tumors in bone, but not, for example, muscle. Why is this, and what factors determine it? We can use our model system both to understand this selectivity, and also to screen for drugs that might prevent it.”

Through a wall and into bone

The process by which cancer cells form secondary tumors requires the cells to first survive a journey through the circulatory system. These migrating cells attach to a blood vessel’s inner lining, and ultimately squeeze through to the surrounding tissue — a process called extravasation, which Kamm’s research group modeled last fall using a novel microfluidic platform.

Now the group is looking to the next step in metastasis: the stage at which a cancer cell invades a specific organ. In particular, the researchers designed a microchip in which they could observe interactions between specific cancer cells and a receptive, organlike environment. They chose to work first with osteo-differentiated cells, as bone is a major target of metastasizing breast cancer cells.

Jeon and her colleagues captured images of the metastatic process: Cancer cells pushed through the vessel wall, spread into the bonelike environment, and clustered deep in the bone matrix to form tiny tumors.

In particular, they found that twice as many cancer cells spread to the bonelike environment as to a standard collagen matrix; these also spread deeper into the bone matrix, forming microclusters of up to 60 cells after five days.

To see what molecular signals might explain the difference in metastatic rate, the team focused on CXCL5 and CXCR2. While these two proteins are known to have a role in metastasis, it’s not clear whether they promote it in specific organs.

The researchers incubated cancer cells with an antibody that blocked CXCR2, and found that these cells were less able to break through the blood vessel lining. They also tried injecting CXCL5 into a collagen-gel matrix without bone cells, and found that the ligand-seeded environment encouraged breast cancer cells to invade. The results suggest these two proteins may be targets for preventing or mitigating cancer metastasis not just in bone, but in other organs as well.

“The beauty of this system lies in its simplicity and elegance,” says Muhammad Zaman, an associate professor of biological engineering at Boston University who was not involved in the research. “I believe that this microfluidic system will be easy to scale to study processes that are important yet have been too difficult to quantify. Overall, I think this is a major breakthrough to understand complex processes, underscore the importance of mechanics and identify novel pathways for treatment.”

The team plans to explore cancer metastasis in other organs, such as muscle — an organ in which cancer cells do not easily spread.

“There are some organs known to be more or less metastatic, and if we can add two different organ types, we can see what kind of differences there are,” Jeon says.

Kamm adds that in the future, such a platform may be used in personalized medicine to determine the best cancer therapy for a given patient.

“One might envision using cells from the cancer patient to produce models of different organs, then using these models to determine the optimal therapy from a variety of available drugs,” Kamm says.

This research was supported by the National Cancer Institute and the Italian Ministry of Health.