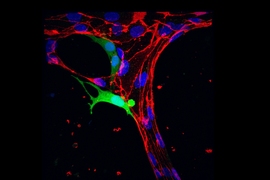 Caption:
A tumor cell (green) pushes halfway through a blood vessel (red).
Credits:
Image: Michelle Chen
Cancer cells metastasize in several stages — first by invading surrounding tissue, then by infiltrating and spreading via the circulatory system. Some circulating cells work their way out of the vascular network, eventually forming a secondary tumor.

While the initial process by which cancer cells enter the bloodstream — called intravasation — is well characterized, how cells escape blood vessels to permeate other tissues and organs is less clear. This process, called extravasation, is a crucial step in cancer metastasis.

Now researchers at MIT have developed a microfluidic device that mimics the flow of cancer cells through a system of blood vessels. Using high-resolution time-lapse imaging, the researchers captured the moments as a cancer cell squeezes its way through a blood vessel wall into the surrounding extracellular matrix. The process is “highly dynamic,” as they write in a paper published in the journal Integrative Biology; a better understanding of it may help scientists identify therapies to prevent metastasis.

“Now that we have a model for extravasation, you can think about using it as a screen for drugs that could prevent it,” says Roger Kamm, the Cecil and Ida Green Distinguished Professor of Biology and Mechanical Engineering at MIT. “We could take circulating tumor cells from a patient and subject those cells to a handful of factors or drugs. That’s ultimately what we’d like to do, but in the process we’re learning a lot as we go along.”

As tumor cells make their way through the circulatory system, some “arrest,” or pause at a particular location, adhering to a blood vessel’s wall — the first stage of extravasation. Scientists have thought that this cell arrest occurs in one of two ways: A cell may send out sticky projections that grab onto the vessel lining, or it may be too big to pass through, literally becoming trapped within the vessel.

To investigate which possibility is more likely, the researchers grew a network of tiny blood vessels from a solution of human umbilical-cord endothelial cells. They injected a solution containing vascular cells into a small microfluidic device containing a reservoir of hydrogel, along with growth factors normally present in the developing circulatory system. Within days, an intricate system of microvessels took shape, with each about one millimeter long and 10 to 100 microns in diameter — dimensions similar to the body’s small capillaries.

The group then pumped tumor cells through the vascular network, using a line of breast cancer cells known to be particularly invasive. Using high-resolution confocal microscopy, the team watched as tumor cells flowed through the miniature circulatory system. They observed that the majority of cells that arrested along a vessel did so due to entrapment — that is, they simply became stuck.

A tumor cell finds a way out

With time-lapse images, the researchers took a closer look at the progression of events following cell arrest. Once a tumor cell becomes trapped, they observed that it sends out long, thin filaments that push against a vessel wall, eventually creating a small hole in the endothelial lining. More and more of the cell squeezes through as the holes give way, and eventually, even the cell’s nucleus — thought to be a relatively rigid, nondeformable structure — is able to escape.

To their surprise, the researchers found that the nucleus made it through the vessel wall earlier and more quickly than they anticipated, squeezing through in about 15 minutes — “a tiny chunk of the time it takes for this entire cell to extravasate,” Chen notes.

Interestingly, Chen points out, once a tumor cell has completely exited a blood vessel, the endothelium appears to heal itself, closing the gaps that the cell initially created. “That suggests that the endothelial barrier has some kind of active role in repairing itself after this invasion by the tumor cell,” Chen says.

In addition to observing the extravasation of single tumor cells, the group also looked at the behavior of cell clusters — two or more cancer cells that accumulate in a blood vessel. From their observations, the researchers found that almost 70 percent of cell clusters broke through a blood barrier, compared with less than 10 percent of single cells.

But some cells that make it out of the circulatory system may still fail to metastasize. To see whether a cell’s ability to extravasate correlates with its metastatic potential, the group compared the efficiency of extravasation of different cancer cell lines. The lines included breast cancer cells, cells from fibrosarcoma (a cancer of the connective tissue), and a line of nonmetastatic cancer cells.

Sure enough, the team observed that the most metastatic cells (fibrosarcoma cells) were also the most likely to extravasate, compared with breast cancer and nonmetastatic cells — a finding suggesting that targeting drugs to prevent extravasation may slow cancer metastasis.

Going forward, the group is looking into how likely a given cancer cell is to proliferate and aggregate with others once it has exited into the surrounding tissue. The researchers are modeling various tissues within the microfluidic platform, including bone, to study how cancer cells form the beginnings of a secondary tumor.

“Although this platform isn’t an in-vivo platform and obviously can’t capture all the aspects that happen in vivo, we’ve come a lot closer to creating an in-vitro platform that’s even more physiologically relevant, high-resolution and high-throughput than a lot of previous platforms,” Chen says.

Muhammad Zaman, an associate professor of biomedical engineering at Boston University, says that tumor intravasation is a major step in metastasis that has been poorly understood due to a lack of robust and scalable tools.

“The work by Kamm and co-workers has provided a highly innovative, controlled and robust system to analyze this key process in exquisite detail,” says Zaman, who was not involved in this research. “This significantly reduces costs with animal models, addresses issues seen in typical in-vitro cultures and, above all, provides quantitative detail.”

“The impact of this work will be profound,” Zaman adds. “I anticipate that both researchers and [pharmaceutical companies] will use this tool to characterize and analyze complex processes of tumor extravasation.”