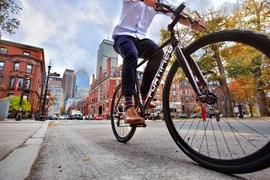 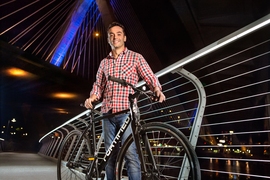 Avid cyclist and serial entrepreneur Slava Menn MBA ’11, an MIT Sloan School of Management alumnus, is racing ever closer to fulfilling a personal — and professional — mission to make it safer to own a bike in the city.

Menn co-founded Fortified Bicycle in 2011, after a friend was struck by a car while riding at night. His bike light had been stolen earlier that day. For years, the startup has developed and sold theft-resistant lights, locks, seats, and other bike components.

Now Fortified Bicycle — which launched with help from MIT’s entrepreneurial ecosystem — has developed “theft-proof and weatherproof” bikes that are currently shipping across the nation.

Aptly called “Invincible,” the bike includes puncture-resistant tires and a rust-proof frame and chain. It’s equipped with custom, theft-resistant components, including a U-lock, lights, handlebars, wheels, and seats — all attached with custom bolts that can only be removed with a special screwdriver, instead of a typical Allen wrench.

Additionally, all bikes are registered to their owners, like cars, through serial numbers. If a bike is stolen, the startup will work with authorities and trawl Craigslist or eBay, where most stolen bikes end up. If all else fails, the startup will replace any stolen bike in 24 hours for free.

With a safer bike, the startup aims to promote cycling in cities as a faster, greener, and healthier mode of transportation, says Menn, now Fortified Bicycle’s chairman. “What we’re trying to do is alleviate the struggle [of bike ownership] and make it easier, and get more people into biking,” he says.

“Force of nature” in entrepreneurship

Both Menn’s parents are engineers, along with all of his uncles and a grandfather. When his family emigrated from the former Soviet Union to the United States when Menn was eight, his father took him to visit MIT’s campus. “He told me, ‘Slava, this is the best university in all of America,’ and I believed him,” Menn says.

Menn applied to MIT’s undergraduate and graduate engineering programs but was rejected. After founding a couple of Web startups, Menn was accepted to MIT Sloan in 2009, with a very specific goal: “All I wanted to do was find a co-founder, graduate, and start a company,” he says.

Enrolling in the MIT Sloan entrepreneurship and innovation track, Menn hit the ground running. In his first semester, he co-founded the now-defunct MIT IdeaStorm, a biweekly brainstorming session in the Cambridge Innovation Center, with classmates Adam and Morgan Blake, both MBA ’11. Hundreds of students from many MIT departments would gather for the sessions to generate ideas relating to businesses and technologies. In his second year, he became president of the MIT Sloan Entrepreneurship Club. Along with MIT Sloan classmates, he also helped develop Socrative, an education app that’s now being used by 800,000 teachers and students worldwide.

Bill Aulet, managing co-director of the Martin Trust Center for MIT Entrepreneurship and an MIT Sloan senior lecturer, remembers Menn as “a force of nature on campus when it came to entrepreneurship — and a very positive one.”

“[Slava] knew he wanted to start a company,” Aulet continues, “he just didn’t know which one, and he was wedded not to a specific idea but to exploring multiple ideas and then finding teammates who had a common vision, shared values, and complementary skills.”

Indeed, Menn says MIT Sloan was “a magical place at a magical time” for starting a company. “I was surrounded by super talented classmates who were as hungry as I was, as passionate as I was, as tech savvy, and dying to start a business,” he says.

In 2011, Menn got his inspiration for what would become a successful business. On a summer night in Boston, the cyclist friend of Menn’s was struck by a car while riding at night, after his light had been stolen.

Working all hours of the day — sometimes until around 4 a.m. — in an MIT lab, the team built prototypes for their now-popular theft-proof bike light, called “The Defender.” Resembling a chamber of a revolver, the battery-charged light locks onto a bike’s handlebars, attached with the startup’s custom bolts. On the business side, they reached out to mentors of the Venture Mentoring Service (VMS). “In the first years, we were constantly reliant on the MIT ecosystem,” Menn says.

What followed was a string of wildly successful Kickstarter campaigns for The Defender and other products.

The company also created several other “indestructible” components, including fenders more resistant to water damage, weatherproof and durable seats, custom seat-post clamps, and a theft-resistant U-lock — which needs to be cut from both ends to be removed.

Tens of thousands of these products have sold worldwide, through Fortified Bicycle and other stores, and less than 1 percent have ever been stolen, according to the company.

Around 2013, Fortified Bicycle decided to combine all their previous components, and some new ones, into the Invincible. This February, a Kickstarter for the bike earned more than $178,000, beating its goal of $100,000.

Since January, Fortified Bicycle has allowed anyone to visit its headquarters in Boston’s Chinatown to test the bikes. Now, they’re shipping thousands of orders across the nation, including many around Boston, where Fortified Bicycle hopes to foster a community of cyclists, Menn says.

But as a thriving startup, Fortified Bicycle’s connection to MIT hasn’t ceased. The startup still reaches out to the VMS for advice, hires MIT engineers and interns, and gains exposure through MIT events such as product expos.