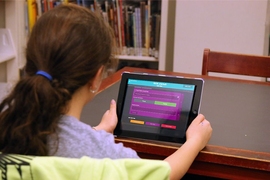 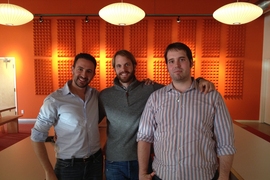 As a teaching assistant at the MIT Sloan School of Management in 2010, Amit Maimon MBA ’11 witnessed the origins of a technological phenomenon: Smartphones and tablets had started creeping into the classroom in the hands of students.

But instead of dismissing these devices as distractions, Maimon saw a way to leverage them to help teachers get a better idea of what students grasp during lectures.

That year, Maimon co-developed Socrative, an app that lets teachers design or select premade quizzes for students to answer, publicly or anonymously, on personal mobile devices during lectures. The app is now being used by about 1.1 million teachers and millions of students across the globe.

The idea is that students respond better to quizzes deployed via mobile devices — “which they’re already staring at,” Maimon says — and many feel more comfortable answering questions anonymously. For the teacher, the accumulated data gives immediate feedback on student comprehension — allowing tailoring of lectures to address problematic material — and tracks student or class progress over time.

“Teachers benefit tremendously by having knowledge of what their students find easy or difficult, what they’re understanding or not, in the moment, in class,” says Maimon, who co-founded a startup, also called Socrative, to commercialize the app. “Teachers [with Socrative] can see how well the class is doing in a very detailed way, and see who’s struggling more, what the class doesn’t understand, and even which students can help others.”

Quizzes can be designed, using a “teacher” app, on any mobile device — either as one-off questions or as a series of true-or-false, multiple-choice, or open-ended questions. In the classroom, students can punch in a class’s identification number on their “student” apps and answer away. Color-coded results for each student and question pop up instantly in the teacher app in rows and columns, with green boxes indicating correct responses, and red boxes indicating incorrect responses.

Importantly, the app is a time-saver — grading is automatic, and there’s a growing database of premade quizzes designed and shared by teachers — which has contributed to its wide adoption, Maimon says. In June, after accumulating 750,000 teacher users worldwide, Socrative sold for $5 million in stock and cash to MasteryConnect, a company that provides digital student-assessment tools to around 85 percent of U.S. school districts.

Current Socrative employees — including two co-founders, Benjamin Berte and Michael West — are further developing the app under MasteryConnect. (After the acquisition, Maimon is no longer part of the company.)

Socrative was conceived and trialed in course 15.060 (Data, Models, Decisions), where Maimon served as a teaching assistant. Frequently, after lectures, students would pose questions about certain aspects of material that were not fully addressed in class, reflecting an understanding that was very different from what he might have expected.

Back then, the only real-time student-response systems were “clickers” — remote-control-like devices with buttons students can press to answer questions or vote in class. But teachers usually rent those systems, which can be expensive, and the systems are difficult to implement.

When he used the app in class a few days later, Maimon saw the potential power of gathering anonymous, real-time data. First, his students voted on answers to lesson-based questions by a show of hands. Then the students weighed in anonymously on the same questions on the prototype app. Maimon saw that certain answers received more votes anonymously than by a show of hands. One reason, he posits: Students may be uncomfortable admitting they don’t understand, so they don’t ask for clarification.

“That’s when the power of real-time anonymity came in, which is fantastic because it changes the social layout,” he says. “If you’re afraid of asking a question because you think you’re the only one who doesn’t understand it, and then suddenly you remove that barrier, you see many others don’t understand as well, and it changes people’s comfort levels.”

In 2010, Maimon recruited Berte and West, and turned to mentors in MIT’s Venture Mentoring Service and Martin Trust Center for MIT Entrepreneurship for advice on marketing and financing, among other things. In 2011, they joined the Imagine K-12 startup accelerator in Palo Alto, Calif., and grew out their team.

“It was internal and external momentum,” Maimon says. “The more we saw people being excited about it from the outside, and the more we brought in team members who were excited about carrying this forward internally, the more we realized this is turning into an actual company.”

That momentum carried Socrative through to the 2012-13 academic year, when the app saw 278,000 quizzes created and shared by more than 3 million teachers and students worldwide, with more than 1,000 teacher users joining per day.

The experience of teachers

Today, other companies have released similar student-response tools. But what sets Socrative apart, Maimon says, is a core focus on K-12 teachers, which informs its simple design.

The app, for instance, has dedicated K-12 features, making it accessible to a broad audience, Maimon says. Apart from quizzes, a “space race” feature lets students compete for the most correct responses; “exit tickets” let students weigh in on what they learned — and what they’d like to learn — as they’re leaving the class.

This simplicity is especially important for teachers trying to educate dozens of students — sometimes very young — without disrupting class. “The experience of the teachers in the class became core to everything we do: making sure that it’s seamless. We knew that if we can’t make it simple enough for core users, we aren’t going to intro more teachers into our system,” Maimon says.

Today, testimonials on the company’s website — and countless online reviews from K-12 teachers of all disciplines — laud the app for its simplicity, as well as for saving time, helping students better understand material, and providing clear data analysis on student progress.

Having reached so many teachers, Socrative is expanding its mission — such as by using data to improve and personalize K-12 education. For instance, Maimon says, should some students learn by video or by lecture? What lessons should be taught by hands-on, experiential methods? Overall, how can we provide better tools for teachers to help every student based on individual needs?

“We need a body of data that is available to start deriving meaningful insights about how to tailor learning methods to students,” Maimon says. “That’s the lofty objective.”