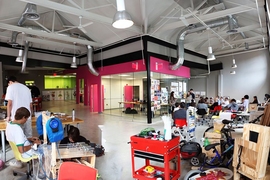 ↓ Download Image
Caption: At NuVu Studio, local high school students get out of the classroom to design robots, websites, board games, medical devices, and clothing, among other things.
Credits: Photo: Liz Linder 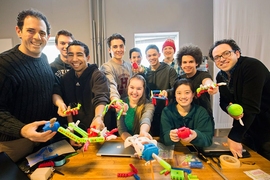 ↓ Download Image
Caption: Saeed Arida (far right) with students who participated in the “do-it-yourself prosthetics” studio (and some of their inventions)
Credits: Photo: Liz Linder 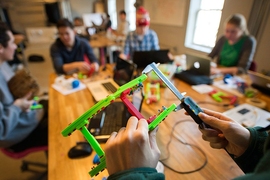 Caption:
At NuVu Studio, local high school students get out of the classroom to design robots, websites, board games, medical devices, and clothing, among other things.
Credits:
Photo: Liz Linder

Caption:
Saeed Arida (far right) with students who participated in the “do-it-yourself prosthetics” studio (and some of their inventions)
Credits:
Photo: Liz Linder

Down an alley off Massachusetts Ave. in Cambridge, there’s a “maker space” called NuVu Studio, where local high school students leave their classrooms behind to design robots, websites, board games, medical devices, and clothing, among other things. But they’re not playing hooky — in fact, it’s part of their education.

The brainchild of MIT alumnus Saeed Arida PhD ’10, NuVu (pronounced “new view”) enrolls students from local schools — both during the academic year and the summer — to focus on real-world projects. In so doing, they’re exposed to the collaborative, experimental, and demanding design process typical of architectural design studios.

“We walk students through a rigorous process to get to this real, final product,” says Arida, who modeled NuVu after design studios in MIT’s School of Architecture and Planning, where he studied design and computation and taught several studios.

Over the course of 11 weeks, students choose to attend a selection of two-week studios under themes such as “science fiction,” “health,” “home of the future,” or this summer’s theme, “fantasy.” Sometimes, studios even bring students to international destinations — such as India and Brazil — for research.

During studios, NuVu coaches present students with real-world problems to solve; the coaches include full-time employees and local experts such as doctors, engineers, and graduate students from MIT and Harvard University.

A brief research period gives way to the bulk of the two-week studio — the rigorous design process — that includes prototyping, critiques from the coach, and constant documentation of progress. Students have full use of NuVu’s equipment, including 3-D printers, designing software, art and photography equipment, and other machines.

At the end of each studio, students present finished projects to guest experts — including professors, practitioners, entrepreneurs, and designers — for evaluation. The rapid design process is “intense,” but beneficial, Arida says.

“Students come in at the beginning of two weeks, and it’s all sketches and scraps of paper. They come out at the end of two weeks and you see results,” Arida explains. “We have this culture here, where you can have an idea, but if you don’t go through this rigorous process, you have nothing.”

Students hail from partner schools around the Boston area, including Beaver Country Day School in Brookline, Phoenix Charter Academy in Chelsea, and Inly School in Scituate.

Such programs are difficult to implement broadly, Arida admits, and private institutions tend to favor them, rather than public schools. But this fall, NuVu is entering its first public-school partnership, with Cambridge Rindge and Latin School, which will send 10 students for the entire semester — and those 10 students will earn credit. It’s a step in the right direction, Arida says.

“Within a year, we hope to have three to five centers opening in different places in United States and internationally,” he adds. “There’s been a lot of interest from people in this educational model.”

NuVu arose from Arida’s 2010 PhD dissertation, which suggested that architectural design studios train youth in “learning by doing” at an accelerated pace. The idea is that in design studios, students spend the bulk of the semester focused on building one project over multiple iterations, receiving constant feedback from professors and other students.

For a case study, Arida approached Beaver Country Day School, which allowed 20 students to participate in a pilot program on its campus, with two-week studios that centered on alternative energy, balloon mapping, interactive music, and filmmaking.

Among other things, Arida’s dissertation suggested that NuVu’s model could help students, in a two-month timespan, understand complex systems and recognize the importance of rapid prototyping. It also helped inform NuVu’s current model of combining instructors with mixed backgrounds — such as pairing a filmmaker with an engineer, or a doctor with an architect — for more effective teaching.

After the pilot, with help from an advisory board of Media Lab instructors — including Edith Ackermann, a visiting researcher; Joost Bonsen, a lecturer; and George Stiny, a professor of computation and design — NuVu set up a second program in Kendall Square with 25 more Beaver students. In 2012, NuVu relocated to its current headquarters.

For students like Liam Brady, a recent Beaver graduate, going from a classroom setting to NuVu was like “night and day.”

“With studio-based learning, we can see the application,” says Brady, who in a 2011 studio designed an interactive floor projection for playing games such as soccer. “As a result, I tend to remember things I learned in a studio environment rather than a classroom environment.”

Brady is one of 10 NuVu alumni returning as interns this summer; another is Cambridge School of Weston junior Harper Mills. As part of a NuVu studio, Mills traveled to Rio de Janeiro for 10 days to research urban inclusivity, and designed an interactive website that laid out prominent challenges facing the city.

For Mills, who enrolled in many studios over the course of an entire year, one benefit of the studio was the time pressure. “You’re constantly asking yourself if you’re being as productive and efficient as possible, and you’re also forced to be self-driven,” she says. “There is no bell or strict schedule moving you through your day, just you and your determination to create the best product you possibly can.”

Another perk, she says, is the iterative design process, where “failure is an integral part of success.”

“In school you get one shot and if you blow it, then that's the end,” Mills says. “At NuVu, when you show the first iteration of your project, it’s to say, ‘I know this isn’t great; how can I make it better?’”

At NuVu, students aren’t graded. “But they end up with a really rich portfolio,” Arida says. “This is important, as portfolios are increasingly becoming integral to the college application process.”

Some projects have found life outside the studio. An interactive music installation one group of students helped design with an MIT architecture student is now on display at the MIT Museum. Other students produced animations explaining social-media phenomena including “selfies” and the “deep Web” that were presented at a conference on youth and media at Harvard.

Last winter, two students created a medical device that expands and improves upon research to reduce tremors caused by Parkinson’s disease. The device measures, in real-time, the frequency and amplitude of a patient’s tremors, creating and sending a feedback signal to the brain that helps suppress the tremors. Being developed further by Wang, the device will begin clinical trials at Beth Israel Hospital this summer.

And in a recent “do-it-yourself prosthetics” studio, two students developed a 3-D printed “artistic” prosthetic hand for children under age 12. Using an online open-source design called “Robo Hand,” they built a hand with interchangeable cylinders to fit a brush, pencils, and other artistic utensils.

Now the student inventors are organizing prosthetic design events next fall at NuVu, where students creating prostheses can display their inventions at the studio and share their knowledge.

“You can really see the impact on these kids,” Arida says. “It’s phenomenal.”

Power (of electronics) to the people

Where the ‘beaver works’