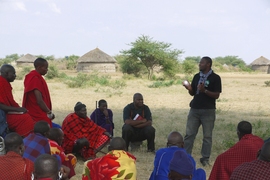 Easily attached to a bike and powered by pedaling, the low-cost, cast-iron sheller allowed farmers to process their corn 10 times faster — in one day, as opposed to weeks when done by hand. The sheller could also be shared among a number of farms.

By 2011, GCS had sold shellers to more than 1,000 farmers. But its products still weren’t moving fast enough to fund product development, marketing, and sales. Sensing the startup’s danger of decline, the GCS board gave Wu an ultimatum: “They said, ‘You have to choose [research and development] or distribution — you can’t do both.’”

From this arose an entirely new, and more efficient, business model. Knowing that about 82 percent of Tanzanians — more than 35 million households — live off-grid, GCS began going to the villages and selling solar-powered lamps, which also charge cellphones.

Suddenly, its product started moving — and fast. “That’s when we realized we’re not facing a technology problem in the field; we’re facing a distribution problem,” says Wu, who studied mechanical engineering at MIT and is CEO of GCS.

GCS has since been a technology-agnostic, product-distribution firm whose employees visit villages across three regions of Tanzania — Arusha, Morogoro, and Mwanza — to research the most-needed and cost-effective technologies for the villagers, and to seek entrepreneurs to distribute those products.

So far, GCS has sold more than 35,000 solar lamps — 15,000 in the past year alone — and 5,000 other products to families across 500 villages. (The startup still sells maize shellers upon request, but doesn’t advertise them.)

The solar lamps, Wu says, have helped replace thousands of kerosene lanterns usually burned in homes for lighting; such lanterns spew out black carbon that contributes to global warming and indoor air pollution. These solar lamps save customers — who make about $2 per day, on average — roughly $70 apiece annually. GCS alone has provided more than $4 million in energy savings since it started selling solar lanterns three years ago.

In December, GCS started selling cooking stoves with insulation that retains more heat than traditional cookers used in the region. These stoves, Wu says, cook twice as fast, with half the charcoal.

Moreover, Wu says, GCS’s business model has helped create jobs for more than 150 Tanzanian entrepreneurs, who collectively have earned an additional $50,000 in income. As most are farmers, she adds, the $6 in margin they earn from selling a single lamp during non-harvest months is enough to feed their family for a few days.

“It’s really about creating a win-win-win situation,” Wu says. “We win in terms of bringing in profits, consumers win because they have products that help them save costs, and entrepreneurs are getting money to put food on the table. We’re doing good through business.”

A “universal adapter” for farmers

In 2008, Wu was taking course 2.722J (D-Lab: Design), taught by senior lecturer Amy Smith, when she learned about the plight of 500 million small-scale farmers around the world still using only their hands and hoes for farming. To shell corn, these farmers traditionally fill bags with cobs and beat them to loosen the kernels, or simply remove the kernels by hand — both of which could take weeks.

As part of the class, Wu traveled to Tanzania to introduce farmers to a pedal-powered sheller developed by a Guatemalan organization called MayaPedal. This machine resembles a stationary bike, with a wooden seat and a hand-cranked sheller at its side. Cobs are fed into the sheller’s opening, as someone pedals, and the kernels are quickly stripped into a bucket, while the bare cobs are ejected backward.

But this machine cost about $200 and weighed over 100 pounds, meaning villagers couldn’t easily afford or transport it. Moreover, it required dismantling used bikes, which are valuable commodities for Tanzanians.

That’s when Wu engineered a solution. “We were building this pedal-powered machine, when really all we needed was that hand-cranked device on the side. We were turning a $25 product into a $200 product,” she says.

In D-Lab, she modified the sheller into a $30 “add-on” for a bike by constructing a bike stand and attaching a carrier to the back pedal that could accommodate the sheller and other devices — such as the cellphone charger that GCS later developed. “We called it our universal adapter,” Wu says.

That summer, Wu traveled to Tanzania with a grant from MIT’s Public Service Center, showing villagers how to build and use the new maize sheller: Farmers need only change a sprocket on the wheel and gears on the upper part of the bike to attach and detach devices. Now not only could farmers process all their maize in one day, but they also retained their bikes for other uses.

Participating in the $100K — with help from fellow students in engineering and in the MIT Sloan School of Management, lawyers, and accountants — also showed Wu some significant errors in her financial planning. “My first executive plan said I needed $20,000 to start my company,” Wu says, laughing: The ultimate figure should have been closer to $1 million. “I learned a lot from the $100K.”

Wu launched GCS in Tanzania with only a few local employees, and has grown the startup to more than 35 employees, most of them Tanzanian. Still, GCS’s connections to MIT have endured — and at times have, in fact, helped the startup thrive in spite of difficulties.

In 2012, for instance, Wu received a $20,000 D-Lab Scale-Ups fellowship. “That came at a very useful time, because I couldn’t even pay for my work permit to stay in Tanzania,” Wu says.

And over the years, D-Lab students have frequently traveled to Tanzania to help with product development, conduct field research, and sometimes design new product prototypes. Some projects didn’t quite pan out — such as a rice-threshing machine that had mechanical issues, or a bike-powered butter churner that couldn’t find a market.

But GCS is now furthering development on a motorized multicrop thresher —developed by a team of students — that the Bill and Melinda Gates Foundation has since backed with $100,000. The product design is currently led by alumnus Elliot Avila ’14, who started working on the thresher in 2013.

The current iteration of the 6-horsepower thresher — which has evolved extensively after years of field-testing — is a wheeled cylinder thresher that can both be adjusted to handle a variety of crops. Traditional threshing methods include beating the plant on the ground or having animals walk over it, which takes hours and produces contaminated grain. GCS’s thresher speeds up the process, can be transported around to other farms, and reduces the strenuous labor associated with these traditional methods.

With a majority of farmers still threshing by hand, Wu says, “this could potentially transform the industry.”

In 2012, Avila and two MIT students also fixed issues with the threads on the sheller’s drive shaft: Sometimes maize wasn’t ejecting properly, and the machine would jam, coming to a sudden halt and putting stress on the threads, causing them to fail. The students discovered the issue and used longer bolts with springs to secure the sheller — so when the maize jammed, the sheller stopped at a more gradual pace, reducing thread stress. All shellers could then be modified, instead of recalled. “D-Lab has really been a great place to get talent,” Wu says.

Today, Wu spends her days overseeing operations at GCS, focusing on identifying products that will improve village life and generate sales. However, one day she hopes to return to her design roots: “My goal is to be at a point where we’ll be distributing to millions of customers, where the sheer numbers of our sales and deep understanding of customer needs will incentivize manufacturers to collaborate with us to make truly transformative products for the people we work with,” she says.

An a-maize-ing path out of poverty

In the World: A better way to beat around the bush

MIT researchers develop a new way to control and measure energy levels in a diamond crystal; could improve qubits in quantum computers.

Graduate student Nicholas Kamp describes the MicroBooNE experiment and its implications for our understanding of fundamental particles.

A new RNA-based control switch could be used to trigger production of therapeutic proteins to treat cancer or other diseases.