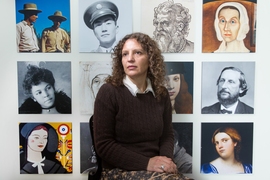 ↓ Download Image
Caption: “I was always very interested in current events and fascinated by what was happening in the world around me,” MIT historian Tanalís Padilla says. “My parents were very political. I considered myself quite a political being. … I think [living in] Mexico and the United States and seeing the contrast to be so great, especially in rural Mexico, made me aware [of politics] early on.”

Caption:
“I was always very interested in current events and fascinated by what was happening in the world around me,” MIT historian Tanalís Padilla says. “My parents were very political. I considered myself quite a political being. … I think [living in] Mexico and the United States and seeing the contrast to be so great, especially in rural Mexico, made me aware [of politics] early on.”
Credits:
Photo: Bryce Vickmark

The murder of Rubén Jaramillo caused a brief international sensation in 1962. Jaramillo was a veteran of Mexico’s revolution, which lasted from 1910 to 1920. Yet by the 1940s, he had become the leader of a regional protest movement in Mexico that, after being stymied by the government, wavered between legal and violent tactics. Although he had been issued an official pardon by the Mexican president, Jaramillo, his wife, and three sons were subject to a gruesome execution by assailants who were never formally identified.

Beyond the headlines surrounding this grisly event lay a deeper story: How had a revolutionary who had fought to establish Mexico’s government become an enemy of the state? And why were armed guerillas fighting in an otherwise placid country, such as postwar Mexico?

To MIT historian Tanalís Padilla, the answers lie in recognizing that midcentury Mexico, known for its one-party state and economic growth, was a different place underneath the surface. It had an active culture of political dissent, fueled by a failure to realize all the promises of its revolution. In her 2008 book about Jaramillo’s movement, “Rural Resistance in the Land of Zapata” (Duke University Press), Padilla examines how Jaramillo and his followers fought for rights, battled state repression, and proposed what they considered a more just path for national development.

“People fought for, among other things, land reform, educational reform, social services, and the [1917] constitution decreed a lot of these demands as rights,” Padilla says. “And many of them were implemented in the 1930s. But some of them withered away, and people kept fighting for them.”

Jaramillo’s guerillas “weren’t inherently radical, trigger-happy people,” Padilla says. They were more like heirs of Emiliano Zapata, the Mexican revolutionary leader from the same state, Morelos, who himself was murdered in 1919.

So while there was once a prominent image of a politically stable and economically prosperous Mexico, which was ruled by one party — the PRI — until 2000, that picture no longer holds.

“If you look at the historiography of Mexico now, no one would say the 20th century was stable,” Padilla says.

Padilla’s work on Mexican political history has helped create this transformation in perceptions of 20th-century Mexico, and made her a significant voice in her field. She recently joined MIT as an associate professor of history, moving from Dartmouth College.

Through history, seeing the world as it is

Padilla was born in Mexico City and spent much of her childhood Tapaxco, Mexico, a small town a couple hours’ drive away. When she finished elementary school, her family immigrated to the U.S., settling in Culver City, California, a town adjacent to Los Angeles that is home to some movie studios. Her own interests, however, centered less on the fictions being filmed on nearby lots than on the realities of Latin American politics.

“I was always very interested in current events and fascinated by what was happening in the world around me,” Padilla says. “My parents were very political. I considered myself quite a political being. … I think [living in] Mexico and the United States and seeing the contrast to be so great, especially in rural Mexico, made me aware [of politics] early on.”

Attending Pomona College as an undergraduate, Padilla expected to study political science or international relations. But her intellectual worldview shifted after taking history classes from professors such as Sidney Lemelle and Miguel Tinker Salas, of Pomona, and Cindy Forster of nearby Scripps College. Suddenly, grasping the historical evolution of contemporary political conflicts began to seem essential to Padilla.

“It was really in my history classes that I saw the explanation of the world as it was,” Padilla says.

That aim of seeing political events in a historical light has never left Padilla, who went on to earn her PhD at the University of California at San Diego. After receiving her doctorate she taught as a visiting professor at Pomona, was a postdoc at Yale University, and then took her faculty position at Dartmouth.

The "long struggle" for justice

Now at MIT, Padilla says she has quickly grown acclimated to her new surroundings and colleagues. “The department is great,” Padilla says. Of MIT in general, she adds, “There is an interest here in public impact, and that to me is so important.”

In addition to her scholarly activities, Padilla writes opinion pieces in the Mexican media and engages in public debates over politics and society, at a time when Mexico’s politics have become rather less placid; the country’s drug violence notwithstanding, the struggle to preserve constitutional rights persists, as she notes. And her research continues apace: Padilla is now writing her second book, about the politics of education in 20th-century Mexico. Specifically, she is looking at the political role of rural teacher-training schools known as “rural normales,” whose students have a long tradition of political activism, especially in constitutional matters.

“They were really a thorn in the government’s side, this group of people throughout the country with a great organizing network, constantly protesting [the rollback of rights],” Padilla says. “It didn’t mesh well with the logic of the state that was trying to keep the population from protesting.”

More generally, Padilla observes, “The process of education can be a tool to create conformity, but it can also be a tool to create resistance.” Governments around the world often wrestle with the implications of this, she adds. Resistance to prevalent political and social ideologies, Padilla believes, is worth studying, because it is through concerted battles that change is most likely to occur.