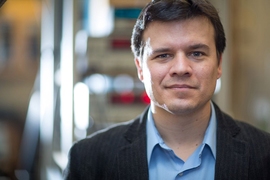 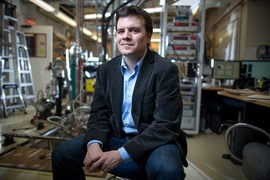 Scotch tape is a staple in Pablo Jarillo-Herrero’s lab. The sticky material is surprisingly effective at isolating graphene, a delicate lattice of carbon atoms that is both the thinnest and toughest material in the world. Since its discovery in 2005, graphene has been hailed as something of a miracle material, with the potential to revolutionize whole industries, from energy and electronics to health care and construction.

Jarillo-Herrero sees graphene as a wild frontier, with endless opportunities to explore and exploit the material’s exceptional properties. With tape in hand and plenty of patience, Jarillo-Herrero peels off layers of graphite — the same stuff of pencil lead — in hopes of isolating a single, gossamer sheet of graphene, just a single atom thick. Then, the fun begins.

“For a good fraction of our time, my grad students and I are just sort of playing, seeking to discover,” says Jarillo-Herrero, who was granted tenure this year, as associate professor of physics.

Jarillo-Herrero studies the electrical and optical properties of graphene and other atomically thin materials such as transition metal dichalcogenides and topological insulators. These ultrathin materials exhibit quantum mechanical properties that can induce extraordinary behaviors in any electrons flowing through them. For example, electrons that flow through graphene can do so across long distances without colliding with obstacles — a quality that makes graphene the best electrical conductor in the world and a possible successor to silicon.

Jarillo-Herrero is exploring the flow of electrons through single sheets of graphene as well as stacked configurations, and in combination with other ultrathin materials. He subjects these “graphene nanodevices” to a range of environmental conditions, including strong magnetic fields and ultracold temperatures. To do all this, he has equipped his lab with powerful magnets, cryostats of liquid helium, and ovens in which to grow new materials.

In describing his experimental approach, Jarrillo-Herrero says that often, “we have something in mind, and we aim at that, but we’re secretly hoping something more interesting will happen, and we have fun exploring the unexpected behavior.”

From theory to experiment

Experimentation was far from his mind when Jarillo-Herrero was first contemplating a career in physics. As a high school student in Valencia, Spain, he participated in an international physics Olympiad and quickly took to the theoretical problems that the challenge posed. Later, when enrolling at the University of Valencia, he chose to study theoretical physics.

“In Spain, the theorists were the professors who had more prestige,” Jarillo-Herrero recalls. “High-energy theoretical physics was the cool thing to do.”

A professor suggested applying to graduate programs in the United States, and Jarillo-Herrero, following his advice, was accepted to the University of California at San Diego. He went with the intention of pursuing a PhD in theoretical physics. However, once there, he began attending seminars outside his concentration and was fascinated with research advances in experimental physics, in particular condensed matter physics, in which scientists attempt to manipulate matter to explore principles of quantum mechanics.

With this newfound direction, Jarillo-Herrero headed to the Delft University of Technology in the Netherlands, where he earned a PhD in condensed matter physics.

A little luck, a lot of work

“For the first two-and-a-half years, I had zero results, no prospects of any results, and was constantly asking myself if maybe this was a mistake, maybe I should be a theorist after all,” Jarillo-Herrero says. “Then one day, in one experiment, we discovered something completely unexpected, and there was this explosion of results.”

That one experiment, in which he suspended a carbon nanotube between two electrodes and observed the symmetric behavior of electrons and holes in quantum dots, led to Jarillo-Herrero’s first publication, in the journal Nature.

“People say, luck has to catch you working,” Jarillo-Herrero says. “When you’re working around things you think are interesting, surprises happen often. And in condensed matter physics, things are often surprising. I would say that’s been a theme throughout my career.”

Playing with the unexpected

In 2008, he joined the MIT faculty as an assistant professor of physics, after a one-year fellowship at Columbia University. That first year, Jarillo-Herrero remembers being overwhelmed by the demands of teaching, research, and setting up his lab space.

“I tend to think of myself as a pretty slow starter,” Jarillo-Herrero says. “Like my PhD, MIT was similar: a little struggle to get started, not much happening, and then, vroom, things picked up, and things have been going quite well. It’s funny how things evolve sometimes.”

Indeed, his experimental work has earned him numerous awards, including a Presidential Early Career Award for Scientists and Engineers, which gave him the opportunity to meet briefly with President Obama and tour the White House.

“As a foreigner, it’s relatively hard to actually visit the White House, so it was very inspiring,” Jarillo-Herrero says.

He and his group are experimenting with new combinations of ultrathin materials, which may ultimately lead to more powerful computer chips and efficient solar cells. But for now, what motivates Jarillo-Herrero is the trove of basic knowledge yet to be discovered.

“Now there are many materials similar in spirit to graphene, meaning they can be obtained in atomically thin dimensions,” Jarillo-Herrero says. “We’re just playing with all of them, and combining them into interesting structures. The properties of those materials are hard to predict and unexpected. And that’s exciting.”

Four professors granted tenure in the School of Science