A new player in appetite control 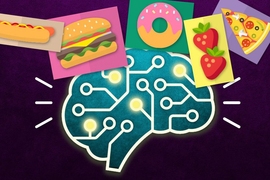 Caption:
Scientists have identified two key groups of neurons within the hypothalamus that help regulate appetite.

MIT neuroscientists have discovered that brain cells called glial cells play a critical role in controlling appetite and feeding behavior. In a study of mice, the researchers found that activating these cells stimulates overeating, and that when the cells are suppressed, appetite is also suppressed.

The findings could offer scientists a new target for developing drugs against obesity and other appetite-related disorders, the researchers say. The study is also the latest in recent years to implicate glial cells in important brain functions. Until about 10 years ago, glial cells were believed to play more of a supporting role for neurons.

“In the last few years, abnormal glial cell activities have been strongly implicated in neurodegenerative disorders. There is more and more evidence to point to the importance of glial cells in modulating neuronal function and in mediating brain disorders,” says Guoping Feng, the James W. and Patricia Poitras Professor of Neuroscience. Feng is also a member of MIT’s McGovern Institute for Brain Research and the Stanley Center for Psychiatric Research at the Broad Institute.

It has long been known that the hypothalamus, an almond-sized structure located deep within the brain, controls appetite as well as energy expenditure, body temperature, and circadian rhythms including sleep cycles. While performing studies on glial cells in other parts of the brain, Chen noticed that the hypothalamus also appeared to have a lot of glial cell activity.

“I was very curious at that point what glial cells would be doing in the hypothalamus, since glial cells have been shown in other brain areas to have an influence on regulation of neuronal function,” she says.

Until recently it has been difficult to study the role of glial cells in controlling appetite or any other brain function, because scientists haven’t developed many techniques for silencing or stimulating these cells, as they have for neurons. Glial cells, which make up about half of the cells in the brain, have many supporting roles, including cushioning neurons and helping them form connections with one another.

In this study, the research team used a new technique developed at the University of North Carolina to study a type of glial cell known as an astrocyte. Using this strategy, researchers can engineer specific cells to produce a surface receptor that binds to a chemical compound known as CNO, a derivative of clozapine. Then, when CNO is given, it activates the glial cells.

The MIT team found that turning on astrocyte activity with just a single dose of CNO had a significant effect on feeding behavior.

“When we gave the compound that specifically activated the receptors, we saw a robust increase in feeding,” Chen says. “Mice are not known to eat very much in the daytime, but when we gave drugs to these animals that express a particular receptor, they were eating a lot.”

The researchers also found that in the short term (three days), the mice did not gain extra weight, even though they were eating more.

“This raises the possibility that glial cells may also be modulating neurons that control energy expenditures, to compensate for the increased food intake,” Chen says. “They might have multiple neuronal partners and modulate multiple energy homeostasis functions all at the same time.”

When the researchers silenced activity in the astrocytes, they found that the mice ate less than normal.

Suzanne Dickson, a professor of neuroendocrinology at the University of Gothenburg in Sweden described the study as part of a “paradigm shift” toward the idea that glial cells have a less passive role than previously believed.

“We tend to think of glial cells as providing a support network for neuronal processes and that their activation is also important in certain forms of brain trauma or inflammation,” says Dickson, who was not involved in the research. “This study adds to the emerging evidence base that glial cells may also exert specific effects to control nerve cell function in normal physiology.”

Still unknown is how the astrocytes exert their effects on neurons. Some recent studies have suggested that glial cells can secrete chemical messengers such as glutamate and ATP; if so, these “gliotransmitters” could influence neuron activity.

Another hypothesis is that instead of secreting chemicals, astrocytes exert their effects by controlling the uptake of neurotransmitters from the space surrounding neurons, thereby affecting neuron activity indirectly.

“We really know very little about how astrocytes contribute to the modulation of appetite, eating, and metabolism,” he says. “In the future, dissecting out these functional difference will be critical for our understanding of these disorders.”

Andres Sevtsuk’s new work estimates foot traffic in cities — so planners and developers can study the flow of people, not just vehicles.