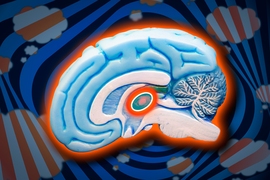 ↓ Download Image
Caption: The brain’s thalamic reticular nucleus (TRN), highlighted in the center, is responsible for blocking out distracting sensory input. "For autism, schizophrenia, and other neurodevelopmental disorders, it seems like TRN dysfunction may be involved in some patients,” Guoping Feng says.

Caption:
The brain’s thalamic reticular nucleus (TRN), highlighted in the center, is responsible for blocking out distracting sensory input. "For autism, schizophrenia, and other neurodevelopmental disorders, it seems like TRN dysfunction may be involved in some patients,” Guoping Feng says.
Credits:
Illustration: Jose-Luis Olivares/MIT

More than 3 million Americans suffer from attention deficit hyperactivity disorder (ADHD), a condition that usually emerges in childhood and can lead to difficulties at school or work.

A new study from MIT and New York University links ADHD and other attention difficulties to the brain’s thalamic reticular nucleus (TRN), which is responsible for blocking out distracting sensory input. In a study of mice, the researchers discovered that a gene mutation found in some patients with ADHD produces a defect in the TRN that leads to attention impairments.

The findings suggest that drugs boosting TRN activity could improve ADHD symptoms and possibly help treat other disorders that affect attention, including autism.

“Understanding these circuits may help explain the converging mechanisms across these disorders. For autism, schizophrenia, and other neurodevelopmental disorders, it seems like TRN dysfunction may be involved in some patients,” says Guoping Feng, the James W. and Patricia Poitras Professor of Neuroscience and a member of MIT’s McGovern Institute for Brain Research and the Stanley Center for Psychiatric Research at the Broad Institute.

Feng and Michael Halassa, an assistant professor of psychiatry, neuroscience, and physiology at New York University, are the senior authors of the study, which appears in the March 23 online edition of Nature. The paper’s lead authors are MIT graduate student Michael Wells and NYU postdoc Ralf Wimmer.

Feng, Halassa, and their colleagues set out to study a gene called Ptchd1, whose loss can produce attention deficits, hyperactivity, intellectual disability, aggression, and autism spectrum disorders. Because the gene is carried on the X chromosome, most individuals with these Ptchd1-related effects are male.

In mice, the researchers found that the part of the brain most affected by the loss of Ptchd1 is the TRN, which is a group of inhibitory nerve cells in the thalamus. It essentially acts as a gatekeeper, preventing unnecessary information from being relayed to the brain’s cortex, where higher cognitive functions such as thought and planning occur.

“We receive all kinds of information from different sensory regions, and it all goes into the thalamus,” Feng says. “All this information has to be filtered. Not everything we sense goes through.”

If this gatekeeper is not functioning properly, too much information gets through, allowing the person to become easily distracted or overwhelmed. This can lead to problems with attention and difficulty in learning.

At the cellular level, the researchers found that the Ptchd1 mutation disrupts channels that carry potassium ions, which prevents TRN neurons from being able to sufficiently inhibit thalamic output to the cortex. The researchers were also able restore the neurons’ normal function with a compound that boosts activity of the potassium channel. This intervention reversed the TRN-related symptoms but not any of the symptoms that appear to be caused by deficits of some other circuit.

“The authors convincingly demonstrate that specific behavioral consequences of the Ptchd1 mutation — attention and sleep — arise from an alteration of a specific protein in a specific brain region, the thalamic reticular nucleus. These findings provide a clear and straightforward pathway from gene to behavior and suggest a pathway toward novel treatments for neurodevelopmental disorders such as autism,” says Joshua Gordon, an associate professor of psychiatry at Columbia University, who was not involved in the research.

Most people with ADHD are now treated with psychostimulants such as Ritalin, which are effective in about 70 percent of patients. Feng and Halassa are now working on identifying genes that are specifically expressed in the TRN in hopes of developing drug targets that would modulate TRN activity. Such drugs may also help patients who don’t have the Ptchd1 mutation, because their symptoms are also likely caused by TRN impairments, Feng says.

The researchers are also investigating when Ptchd1-related problems in the TRN arise and at what point they can be reversed. And, they hope to discover how and where in the brain Ptchd1 mutations produce other abnormalities, such as aggression.

The research was funded by the Simons Foundation Autism Research Initiative, the National Institutes of Health, the Poitras Center for Affective Disorders Research, and the Stanley Center for Psychiatric Research at the Broad Institute.

MIT researchers have found a possible link between attention deficit disorders and autism, reports Lindsay Kalter for The Boston Herald. “One of the long-term goals is gene therapy where we can actually introduce genetic material that might be missing from the human,” explains grad. student Michael Wells.

Popular Science reporter Claire Maldarelli writes that researchers from MIT have identified how sensory overload occurs for people with neurodevelopmental disorders. Based off their findings, the researchers hope they can "classify these disorders in a better way, but also develop therapies that alleviate or diminish the symptoms.”