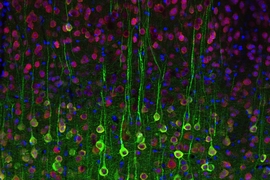 Caption:
MIT neuroscientists used calcium imaging to label these pyramidal cells in the brain.
Credits:
Image: Qian Chen
A team led by MIT neuroscientists has developed a way to monitor how brain cells coordinate with each other to control specific behaviors, such as initiating movement or detecting an odor.

The researchers’ new imaging technique, based on the detection of calcium ions in neurons, could help them map the brain circuits that perform such functions. It could also provide new insights into the origins of autism, obsessive-compulsive disorder and other psychiatric diseases, says Guoping Feng, senior author of a paper appearing in the Oct. 18 issue of the journal Neuron.

“To understand psychiatric disorders we need to study animal models, and to find out what’s happening in the brain when the animal is behaving abnormally,” says Feng, the James W. and Patricia Poitras Professor of Neuroscience and a member of the McGovern Institute for Brain Research at MIT. “This is a very powerful tool that will really help us understand animal models of these diseases and study how the brain functions normally and in a diseased state.”

Performing any kind of brain function requires many neurons in different parts of the brain to communicate with each other. They achieve this communication by sending electrical signals, triggering an influx of calcium ions into active cells. Using dyes that bind to calcium, researchers have imaged neural activity in neurons. However, the brain contains thousands of cell types, each with distinct functions, and the dye is taken up nonselectively by all cells, making it impossible to pinpoint calcium in specific cell types with this approach.

To overcome this, the MIT-led team created a calcium-imaging system that can be targeted to specific cell types, using a type of green fluorescent protein (GFP). Junichi Nakai of Saitama University in Japan first developed a GFP that is activated when it binds to calcium, and one of the Neuron paper authors, Loren Looger of the Howard Hughes Medical Institute, modified the protein so its signal is strong enough to use in living animals.

The MIT researchers then genetically engineered mice to express this protein in a type of neuron known as pyramidal cells, by pairing the gene with a regulatory DNA sequence that is only active in those cells. Using two-photon microscopy to image the cells at high speed and high resolution, the researchers can identify pyramidal cells that are active when the brain is performing a specific task or responding to a certain stimulus.

In this study, the team was able to pinpoint cells in the somatosensory cortex that are activated when a mouse’s whiskers are touched, and olfactory cells that respond to certain aromas.

This system could be used to study brain activity during many types of behavior, including long-term phenomena such as learning, says Matt Wachowiak, an associate professor of physiology at the University of Utah. “These mouse lines should be really useful to many different research groups who want to measure activity in different parts of the brain,” says Wachowiak, who was not involved in this research.

The researchers are now developing mice that express the calcium-sensitive proteins and also exhibit symptoms of autistic behavior and obsessive-compulsive disorder. Using these mice, the researchers plan to look for neuron firing patterns that differ from those of normal mice. This could help identify exactly what goes wrong at the cellular level, offering mechanistic insights into those diseases.

“Right now, we only know that defects in neuron-neuron communications play a key role in psychiatric disorders. We do not know the exact nature of the defects and the specific cell types involved,” Feng says. “If we knew what cell types are abnormal, we could find ways to correct abnormal firing patterns.”

The researchers also plan to combine their imaging technology with optogenetics, which enables them to use light to turn specific classes of neurons on or off. By activating specific cells and then observing the response in target cells, they will be able to precisely map brain circuits.

The research was funded by the Poitras Center for Affective Disorders Research, the National Institutes of Health and the McNair Foundation.