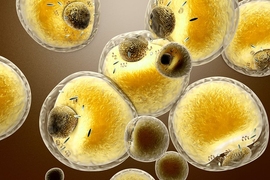 Obesity is one of the biggest public health challenges of the 21st century. Affecting more than 500 million people worldwide, obesity costs at least $200 billion each year in the United States alone, and contributes to potentially fatal disorders such as cardiovascular disease, type 2 diabetes, and cancer.

But there may now be a new approach to prevent and even cure obesity, thanks to a study led by researchers at MIT and Harvard Medical School and published today in the New England Journal of Medicine. By analyzing the cellular circuitry underlying the strongest genetic association with obesity, the researchers have unveiled a new pathway that controls human metabolism by prompting our adipocytes, or fat cells, to store fat or burn it away.

“Obesity has traditionally been seen as the result of an imbalance between the amount of food we eat and how much we exercise, but this view ignores the contribution of genetics to each individual’s metabolism,” says senior author Manolis Kellis, a professor of computer science and a member of MIT’s Computer Science and Artificial Intelligence Laboratory (CSAIL) and of the Broad Institute.

The strongest association with obesity resides in a gene region known as “FTO,” which has been the focus of intense scrutiny since its discovery in 2007. However, previous studies have failed to find a mechanism to explain how genetic differences in the region lead to obesity.

“Many studies attempted to link the FTO region with brain circuits that control appetite or propensity to exercise,” says first author Melina Claussnitzer, a visiting professor at CSAIL and instructor in medicine at Beth Israel Deaconess Medical Center and Harvard Medical School. “Our results indicate that the obesity-associated region acts primarily in adipocyte progenitor cells in a brain-independent way.”

To recognize the cell types where the obesity-associated region may act, the researchers used annotations of genomic control switches across more than 100 tissues and cell types. They found evidence of a major control switchboard in human adipocyte progenitor cells, suggesting that genetic differences may affect the functioning of human fat stores.

To study the effects of genetic differences in adipocytes, the researchers gathered adipose samples from healthy Europeans carrying either the risk or the non-risk version of the region. They found that the risk version activated a major control region in adipocyte progenitor cells, which turned on two distant genes, IRX3 and IRX5.

Follow-up experiments showed that IRX3 and IRX5 act as master controllers of a process known as thermogenesis, whereby adipocytes dissipate energy as heat, instead of storing it as fat. Thermogenesis can be triggered by exercise, diet, or exposure to cold, and occurs both in mitochondria-rich brown adipocytes that are developmentally related to muscle, and in beige adipocytes that are instead related to energy-storing white adipocytes.

“Early studies of thermogenesis focused primarily on brown fat, which plays a major role in mice, but is virtually nonexistent in human adults,” Claussnitzer says. “This new pathway controls thermogenesis in the more abundant white fat stores instead, and its genetic association with obesity indicates it affects global energy balance in humans.”

The researchers predicted that a genetic difference of only one nucleotide is responsible for the obesity association. In risk individuals, a thymine (T) is replaced by a cytosine (C) nucleobase, which disrupts repression of the control region and turns on IRX3 and IRX5. This then turns off thermogenesis, leading to lipid accumulation and ultimately obesity.

By editing a single nucleotide position using the CRISPR/Cas9 system — a technology that allows researchers to make precise changes to a DNA sequence — the researchers could switch between lean and obese signatures in human pre-adipocytes. Switching the C to a T in risk individuals turned off IRX3 and IRX5, restored thermogenesis to non-risk levels, and switched off lipid storage genes.

“Knowing the causal variant underlying the obesity association may allow somatic genome editing as a therapeutic avenue for individuals carrying the risk allele,” Kellis says. “But more importantly, the uncovered cellular circuits may allow us to dial a metabolic master switch for both risk and non-risk individuals, as a means to counter environmental, lifestyle, or genetic contributors to obesity.”

Success in human and mouse cells

The researchers showed that they could indeed manipulate this new pathway to reverse the signatures of obesity in both human cells and mice.

Similarly, repression of IRX3 in mouse adipocytes led to dramatic changes in whole-body energy balance, resulting in a reduction of body weight and all major fat stores, and complete resistance to a high-fat diet.

“By manipulating this new pathway, we could switch between energy storage and energy dissipation programs at both the cellular and the organismal level, providing new hope for a cure against obesity,” Kellis says.

The researchers are currently establishing collaborations in academia and industry to translate their findings into obesity therapeutics. They are also using their approach as a model to understand the circuitry of other disease-associated regions in the human genome.

The paper is a tour de force, according to Evan Rosen, a professor of medicine at Harvard Medical School who was not involved in the research.

“The researchers present a near-complete unveiling of how a genetic risk allele in a noncoding region of the genome really works,” Rosen says. “It’s really an extraordinary piece of science, and it provides a template for how we should be approaching these genetic variants in all disease areas.”

Prof. Manolis Kellis speaks with BBC reporter Andrew Peach about the discovery of a genetic “master switch” inside fat cells. This switch “decides whether every time we have a meal the excess calories will be stored as fat or whether they will actually be burned away as heat,” explains Kellis.

Prof. Manolis Kellis and his colleagues have discovered a metabolic switch linked to obesity, reports Chukwuma Muanya for The Guardian. “Obesity has traditionally been seen as the result of an imbalance between the amount of food we eat and how much we exercise, but this view ignores the contribution of genetics to each individual’s metabolism,” explains Kellis.

Lloyd Mallinson reports for Boston.com that researchers from MIT and Harvard have discovered the link between obesity and genetics. “The uncovered cellular circuits may allow us to dial a metabolic master switch for both risk and non-risk individuals, as a means to counter environmental, lifestyle, or genetic contributors to obesity,” explains Prof. Manolis Kellis.

“Researchers at MIT and Harvard Medical School have analysed the genetics behind obesity,” writes Natasha Hinde for The Huffington Post. “They discovered a new pathway that controls human metabolism by prompting fat cells to store fat or burn it away.”

Andy Coghlan reports for New Scientist that MIT researchers have found a gene that determines whether fat cells store or burn energy. “You could say we’ve found fat cells’ radiator, and how to turn it up or down,” says Prof. Manolis Kellis.

Researchers from MIT and Harvard have discovered how the key gene linked to obesity makes people fat, reports the Associated Press. The study revealed that “a faulty version of the gene causes energy from food to be stored as fat rather than burned.”

Alice Park reports for TIME that researchers from MIT and Harvard have identified a pathway that controls how much fat cells burn or store. “What these results say is that we can reprogram all the major fat stores in humans by intervening in this particular pathway,” explains Prof. Manolis Kellis.