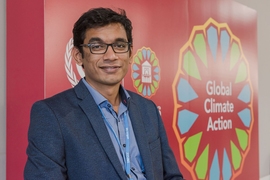 The MIT Energy Initiative is sharing reports from the United Nations Climate Change Conference in Marrakech, Morocco, where MIT community members are observing the climate negotiations and speaking at auxiliary events.

At a side event of COP22, the 2016 United Nations Climate Change Conference in Marrakech, Morocco, researchers and nongovernmental leaders from around the world discussed policy research that can support implementation of the 2015 Paris Agreement to limit global temperature rise. Among the nine panelists was a sole graduate student: MIT’s Arun Singh.

On the panel, “New Directions in Climate Change Research and Implications for Policy,” Singh and fellow representatives of the COP22 Research and Independent Nongovernmental Organizations (RINGO) constituency gave brief overviews of their research in various areas, from agro-industrial development policies to green social work.

Singh shared his research on clean development pathways for India, which applies an energy-economic model he is developing with advisors Valerie Karplus and Niven Winchester. The model simulates policy and technology choices India could make to fulfill its intended, nationally determined contributions under the Paris Agreement — and how each of those choices could impact emissions, energy use, and the country’s economy.

“For example,” says Singh, “how would India’s ambitious solar targets compare with, say, a price on carbon to achieve similar levels of emissions reductions? Who wins and loses under alternate policy choices? Those are the types of questions we’re looking to answer.”

In the global effort to address climate change, India’s role as a major player is indisputable. The country is the third largest emitter of global greenhouse gas emissions, behind China and the U.S., yet nearly 19 percent of India’s population, most of which lives in rural areas, still lacks reliable access to electricity — and the population is still growing rapidly.

“India is in a situation where it has to balance tradeoffs between increasing energy output and ensuring that additional generation does not add significantly to the country’s carbon emissions,” Singh explains. To make these tradeoffs, policymakers and regulators would benefit from having access to quantitative analysis of policy impacts, which Singh and his team hope to provide.

“Arun’s work stands out because it combines modeling of policies at the country level with an assessment of financial and operational barriers to clean energy investment at the micro level,” says Karplus, an assistant professor of global economics and management at the MIT Sloan School of Management, who is also a faculty affiliate of the MIT Energy Initiative and the Joint Program on the Science and Policy of Global Change. “We hope to work with policymakers in India to identify strategies that are cost effective and politically workable. To do that, we need to analyze proposals in terms of both the cost and the distribution of impacts.”

For Singh, researching solutions to climate and energy issues is personal: Having grown up in Ayodhya, India, he experienced the challenges firsthand. “Frequent power cuts were a norm while I was growing up. In peak summer months, we would not get power for eight to 10 hours a day. And this was still in a town,” he says.

Following his undergraduate studies at India Institute of Technology Roorkee, Singh became more interested in understanding energy and environmental policymaking, while working at a petroleum refinery. Then, as a research associate at the Abdul Latif Jameel Poverty Action Lab (J-PAL) South Asia office in Mumbai, he worked on environmental regulation reform projects in India, including a pilot emissions trading scheme for industrial particulate matter emissions, conducted with India’s Ministry of Environment and Forests. At J-PAL, he also carried out an impact evaluation of public disclosure of industrial air pollution ratings, for which he analyzed emissions data from more than 5,000 firms and worked closely with his team and with regulators to secure approval for a new disclosure program.

As he made field visits to some of the most polluted industrial clusters in India, he learned how nuanced the issues can be. “In India it is common to hold strong positions favoring or opposing development. But that’s not helpful, as it’s not an either-or question,” he says. “Smart policies can be designed that encourage growth while limiting the impact on natural environment and climate. And India already has several forward-looking policies in place.”

His work motivated him to come to MIT, where he arrived with a desire to focus on climate and energy policy research for developing countries, but he was not yet sure exactly where his studies would take him.

He started in 2015 as a graduate student in the Technology and Policy Program — which is now part of the Institute for Data Systems and Society — working with Karplus to study policies and regulation in the electricity sector in India, with funding from the MIT Energy Initiative. Then, an opportunity arose to help Karplus and Winchester develop the energy-economic model he now works on as a fellow of the Tata Center for Technology and Design and research assistant in the MIT Joint Program.

When Karplus learned of a call for researchers to present at COP22 with the RINGO constituency, she alerted Singh, who applied and was selected to present.

In Marrakech, Singh shared preliminary findings from his model, which offer initial insights into how carbon pricing and renewable energy support policies compare in terms of their impact on carbon dioxide emissions, the energy system, and the economy. To finalize his research, he plans to expand the model’s specifications to reflect policy priorities and physical constraints, especially on details in technology choices. He is also investigating the political and economic factors that drive these choices, and viable design options for increasing the political feasibility of cost-effective policies to reduce carbon dioxide emissions.

“I am so pleased and proud that Arun had the opportunity to represent our group in Marrakech. By interacting with diverse stakeholders at the COP, Arun has been able to share his research on India with the world, and compare and contrast its insights with experiences in other countries,” Karplus says.

At MIT, Singh co-leads a student group, Energy for Human Development (e4Dev), with fellow graduate student Turner Cotterman, bringing together members of the MIT community to advance understanding of issues facing the developing world, with guest lectures from notable experts, outreach programs, and educational opportunities. He plans to share his COP22 experience with the group.

Singh’s first experience with UN climate negotiations has been “overwhelming,” he says, from the efforts that go into organizing the COP to how the complex negotiation process functions.

“It’s very encouraging to see enthusiastic participation of all countries and the near unanimous recognition of climate change as a problem requiring strong collective efforts,” he says. “There’s no room for skepticism or delaying action.”

Singh looks forward to continuing to play a role in informing energy and climate solutions for India with his research, as part of the MIT community dedicated to making a better world.