3 Questions: The origin of the cosmos’ heaviest elements 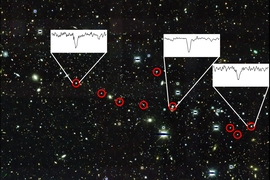 Reticulum II is an ancient and faint dwarf galaxy discovered in images taken as part of the Dark Energy Survey. It orbits the Milky Way galaxy about 100,000 light years away from us. Though the galaxy looks unassuming at first, the chemical content of its stars may hold the key to unlocking a 60-year-old mystery about the cosmic origin of the heaviest elements in the periodic table. Today in the journal Nature, a team of astronomers at MIT’s Kavli Institute for Astrophysics and Space Research and the Observatories of the Carnegie Institution of Washington report on observations of this unique galaxy using the Magellan telescopes at the Las Campanas Observatory in Chile’s Atacama Desert. Lead author and MIT physics graduate student Alex Ji explains more.

Q: How are the heaviest elements in the periodic table created in the cosmos?

A: Carl Sagan popularized the notion that we are all made of star stuff. He could say so with confidence because we actually know where nearly every element in the periodic table is made in the universe. But there's a hole in our understanding. The heaviest elements are made in what is called the "rapid neutron-capture process," or "r-process" for short, in which heavy elements are quickly built up from lighter seed nuclei. Gold, platinum, and uranium are r-process elements, as are more exotic elements like europium, neodymium, and gadolinium.

The nuclear physics of the r-process was mostly worked out by 1957, but for almost 60 years astronomers have debated about the astrophysical site that could provide the extreme conditions for the r-process to occur. Synthesizing the r-process elements requires environments with a very large number of neutrons. The two best candidate sites are supernovae and merging neutron stars. Supernovae are the explosions that mark the end of a massive star's life. They often leave behind a remnant called a neutron star. During the formation of a neutron star, a large amount of neutrons is released. If two of these neutron stars happen to be orbiting each other, they will eventually merge to form one giant neutron star. During that explosion neutrons are released and r-process elements can form.

Q: How does this dwarf galaxy help us understand the site of the r-process?

A: Reticulum II is not the first ancient dwarf galaxy to have its chemical content examined; it's actually the 10th. But its chemical composition differs completely from those other galaxies. The stars in those first nine galaxies have unusually low amounts of r-process elements. Reticulum II, on the other hand, is chock-full of r-process elements. Its stars display some of the highest r-process enhancements we have ever seen. It's almost literally a gold mine.

What this means is that a single rare event produced a rather large amount of this r-process material. All those elements were then incorporated into the surrounding gas and from there into the next generations of stars. It is those stars that we can still observe today. The single, prolific r-process event in this galaxy implies that a neutron star merger could have produced these elements in the early universe. A normal supernova would have produced less, and the observed enhancement could not have been as high, though it's also hypothesized that rare, magnetically-driven supernovae might be able to produce much more r-process material.

Interestingly, there is indirect evidence that neutron star mergers do also synthesize r-process elements in the universe today. So it looks like neutron star mergers could be the primary r-process sites throughout cosmic time. It's amazing to think that Reticulum II preserved a signature of that extraordinary event for more than 12 billion years, just waiting for us to dig it up.

Q: What was it like to be at the telescope and realize what you had found?

A: Based on studying the other ultra-faint galaxies, I had expected to find stars with essentially none of these r-process elements and to further establish that these types of dwarf galaxies are devoid in these elements. So we had a plan to get some really good, low upper limits on the r-process content to push this issue. When we realized the stars in this galaxy were the complete opposite, and instead full of r-process elements, I was certain I had screwed something up. From the telescope in Chile I called my advisor Anna Frebel in Cambridge [Mass.] in the middle of the night to urgently talk about what was going on. Telescope time is precious and expensive after all and shouldn't be wasted.

During the hour-long discussions that followed, I kept observing more stars while carrying out preliminary analyses of the data at hand to ensure that this was a real signal. At the observatory, astronomers work all night and sleep during the day. But after seeing the r-process elements in the first few stars, I couldn't sleep anymore; all I could do was stare out the window and hope the incoming clouds would go away again and the wind would die down.

We were very lucky that it ended up being clear most of the four nights we had available. My last night there, the weather forecast, as translated from Spanish by Google, read "rain and wind." So I prepared myself to get no data that night. But it turned out Google had translated the word "despejado" incorrectly and in fact it was supposed to be "clear and wind." An important translation to get right, especially for astronomers!