The discovery suggests that the very first generation of stars may not have been as powerful as previously thought.
Jennifer Chu, MIT News Office
Publication Date:
Press Inquiries 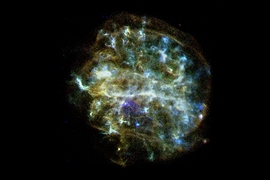 ↓ Download Image
Caption: The Chandra X-Ray Observatory captured this image of G292.0+1.8, a young, oxygen-rich supernova remnant with a pulsar at its center surrounded by outflowing material. The image shows a rapidly expanding shell of gas that is 36 light-years across and contains such elements as oxygen, neon, magnesium, silicon, and sulfur.
Credits: Image: NASA

Caption:
The Chandra X-Ray Observatory captured this image of G292.0+1.8, a young, oxygen-rich supernova remnant with a pulsar at its center surrounded by outflowing material. The image shows a rapidly expanding shell of gas that is 36 light-years across and contains such elements as oxygen, neon, magnesium, silicon, and sulfur.
Credits:
Image: NASA
As the Big Bang’s name suggests, the universe burst into formation from an immense explosion, creating a vast soup of particles. Gigantic clouds of primordial soup, made mainly of hydrogen and helium, eventually collapsed to form the first stars — massive, luminous, short-lived objects that exploded as supernovae soon after. In the wake of such explosions, gas clouds gave rise to a second generation of stars that telescopes can still pick out today.

Scientists have thought that the first stars in the universe burst with tremendous energy, spewing out the first heavy elements, such as carbon, iron, and oxygen. But according to new research from MIT, not all of these first stars may have been forceful exploders.

The team has identified a distant star several thousand light-years away — named SMSS J031300.36-670839.3 — that contains a level of iron whose upper limit is so low that it suggests that the star is a second-generation star, having arisen from the gas cloud enriched by one of the very first stars in the universe. But because there is so little iron in the star, the researchers say the star’s progenitor must not have been very energetic, as it may have failed to expel all the heavy elements made in its own core.

The findings, which are published this week in the journal Nature, provide a glimpse of what the activity in the very early universe may have looked like, and point to much more diverse properties among the very first population of stars.

“One very central question for all of us is, ‘How did the first stars and galaxies get started?’” says co-author Anna Frebel, an assistant professor of physics and a member of MIT’s Kavli Institute for Astrophysics and Space Research. “This star had a lower-than-expected explosion energy, and also lower than today’s regular supernovae, which was really an unexpected finding. That tells us that, to some extent, we have to go back to the drawing board, because there is more variety amongst this very first generation of stars than we have assumed so far.”

Whittling down the stellar field

The surface of a star can tell you a quite a bit about what came before: The chemicals present on the surface are essentially the remnants of the previous star’s explosion. Since the Big Bang, successive generations of stars have fused and spewed chemical elements into the universe, creating the building blocks for galaxies and planetary systems. Today, the youngest stars form from gas polluted with every element in the periodic table.

To find the earliest generations of stars, scientists look for vanishingly small abundances of the first heavy elements created, such as iron. Stars with very low chemical abundances, they believe, may have formed in the earliest epoch of the universe, more than 13 billion years ago, when few elements had yet formed.

To find such a stellar candidate, Frebel, physics postdoc Heather Jacobson, and their colleagues at Mount Stromlo Observatory in Australia went through the spectral data of millions of stars collected by SkyMapper, an automated telescope that tracks planets, stars, and asteroids in the southern sky. The researchers weeded through the data, discarding any stars with spectra similar to the sun — a modern analogue with relatively large chemical abundances.

After whittling down the stellar field, the researchers singled out a handful of stars containing very low chemical signatures. They then got a closer look at these stars using the Magellan Telescopes — a pair of large telescopes in Chile — to obtain high-resolution spectral data.

From this data, Frebel and her colleagues analyzed each star’s absorption lines. Every chemical element gives off a characteristic absorption line, or wavelength of light; the fainter this line, the less of the chemical is present. In the case of SMSS J031300.36-670839.3, the researchers calculated that the star’s iron content is at least seven orders of magnitude, or 10 million times, less than the iron found in the sun — which is the lowest iron abundance ever detected in a star. The star, they concluded, must be a true second-generation star.

‘Zooming in on an early star’

The group also measured the abundance of carbon in SMSS J031300.36-670839.3, and found that this element was in much higher supply — more than a thousand times greater than iron. The discrepancy, Frebel says, is illuminating:  According to computational models, stellar formation occurs from the inside out. Chemical elements that are fused in a star’s core are pushed further out to its perimeter, making way for new elements to form. The outer layers of the very first generation of stars were likely composed of the first heavy elements, leaving heavier elements like iron in their cores. According to theory, when these very first stars exploded as supernovae, they spewed all their chemical elements into space.

But the new second-generation star may change scientists’ understanding of just how active the very first generation of stars was. Because the newly identified star has both very low iron and relatively high carbon content, Frebel envisions an alternative scenario: that this star arose from a low-energy, first-generation star whose explosion expelled the contents of its outer layers, but was not strong enough to release chemicals such as iron from its inner layers. The resulting gas cloud — high in carbon, and low in iron — eventually coalesced to form SMSS J031300.36-670839.3.

Volker Bromm, an associate professor of astronomy at the University of Texas at Austin, says that the newly detected star may be the most primordial star ever detected. Most other old, metal-poor stars identified in the past have possessed small amounts of iron and other heavy elements. This newest star, in contrast, has no detectable iron — only an upper limit.

“Theoretical models predict that the truly first … stars [also known as ‘Population III’] were all massive, such that all of them would have died a long time ago," says Bromm, who was not involved in the research. “[This new] star is just a whisker away from the elusive Population III, but preserves the conditions in the early universe. Thus, we are getting here as close as one can hope to the moment of first light.”

Understanding just how energetic the first stars were can give scientists an idea of the kind of environment in which the first galaxies and planets formed, Frebel says. For instance, massive stellar explosions could potentially blow apart an embryonic galaxy, whereas less energetic supernovae may increase the chance for a new galaxy to stay together and expand.

“By zooming in on an early star and finding something slightly unusual that goes a bit against the mainstream view, we’ve sort of rattled theory a little in a good way to say, ‘Maybe we have to rethink how the first stars formed,’” Frebel says.

This research was funded by the National Science Foundation, the Australian Research Council, and the European Union’s Seventh Framework Program.

Reporter Lisa Grossman interviews MIT Professor Anna Frebel about her work searching for the oldest, living stars in the universe, and her recent discovery of a star almost as old as the universe.

“Four years ago, Anna Frebel, a young astronomer at the Massachusetts Institute of Technology, found an ancient star in a neighboring galaxy whose chemical composition proved nearly identical to some unusual stars on the outskirts of our own galaxy,” wrote New York Times reporter Curtis Brainard in a feature on Prof. Frebel’s work.